A little rain must fall into everyone's life.  Thankfully what's fallen into my life hasn't been TOO traumatic!  The other saying, if it's not broken don't fix it, doesn't quite apply.  Lucky for me, it's not broken according to the x-rays.

I really do try to be careful, knowing I can be a klutz now and again.  A couple days ago I was playing with Cooper on the floor when out of the blue, I whacked the back of my hand on the sharpest corner of the coffee table.  OUCH!!!

It put me flat on the floor for quite some time before the pain subsided enough to sit up.  I gingerly moved my fingers.  It must be okay since they wiggled nicely.  Unfortunately, the more I wiggled them, the worse it got until two days later it was swelled up and painful all day long.

My magic bag of frozen peas worked for awhile, but the pain kept returning, especially when I was sewing the binding on the quilt.  Maybe I DID break something.  In the end, it's just badly bruised at the same spot full of arthritis from when the horse bucked me off.

This lovely splint will keep me from moving it most of the day, which will give it time to heal up.  So much for hand sewing for awhile, which is okay, since the binding for the next two quilts has disappeared. 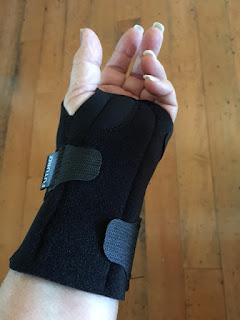 This does not bode well for my AA personality that has to be moving and doing all the time.  Maybe I can still cook.  I put a plastic bag on my hand and poked my fingers through.  Perfect!!  I picked up these spare ribs the other day (only because they were out of baby backs) to test in my Instant Pot. 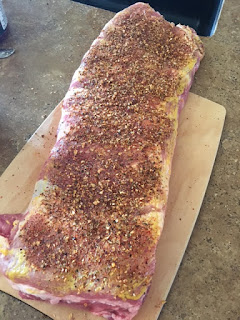 Several people have tried this recipe and say it's wonderful.  So here goes!  Seasoned up, they go into the pot in one big piece with a cup of beef broth in the bottom.  Twenty five minutes later, they were done, although I did a slow release of pressure for ten minutes before opening the pot. 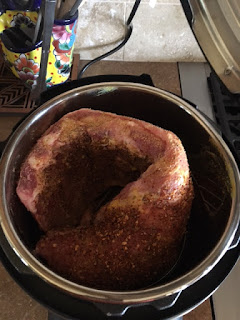 They were fall off the bone tender.  Cut in half and placed on foil to keep cleanup to a minimum, I smothered them in sauce and broiled for ten minutes more.  They came out amazing, or at least they LOOKED amazing.

As I picked up a piece, the meat just feel off the bone.  I would love to say they were delicious.  The spice rub I used was not my own, so the flavor wasn't up to par.  I slathered on more sauce.  Not bad, but nothing like ribs smoked outside, or even barbecued outside on a grill.  Although good in a pinch, this recipe probably won't be repeated unless I find some baby back ribs. 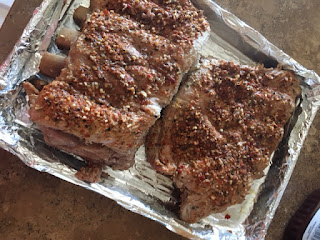 So ..... now that I know the way around my brace is a plastic bag, I'm off to the Elks RV Park to help cook breakfast ... pancakes, sausage, eggs, fruit and whatever else they come up with.  Maybe I can bring something home so I don't have to cook again this weekend.