Now that the dust has settled, I'll finish up the May Fair and being hijacked to work the quilt room.  It definitely made me appreciate my work a little more to see a few quilts where the seams didn't match up and the corners were cut off.  Sewing is easy, it's putting it together perfectly that's the hard part. 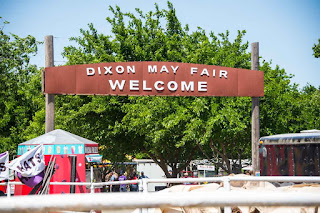 Here's another extremely difficult one to complete.  Look at all those tiny triangle-like pieces.  I would NEVER try to make this one!! 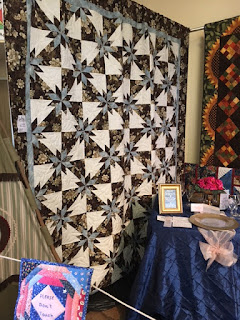 By now my feet were killing me, so I became a slacker on the job when I found an empty chair.  This one won the Christmas award.  It looks good enough to eat!! 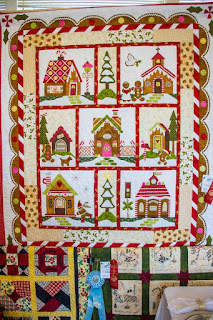 When we were finally released, rather than hit the midway with all the screaming kids, we went through the Fine Arts building.  That's not usually where I pick to wander, but this oil painting made it all worth it.  There's no way a picture can show how amazingly real this painting is.  It totally looks like there is a kitty laying there ... definitely a 3D look.  I almost reached out to pet it. 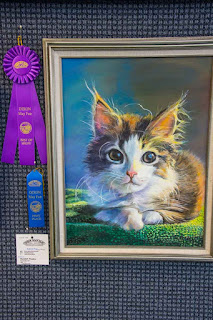 Time for the ooey gooey part of Fair time.  As I said before, I only go for the food, and this fair had the best concession I've ever seen.  THIS is a huge ice cream sandwich, filled to the brim with soft serve, dipped in chocolate and oreo cookie crumbs. 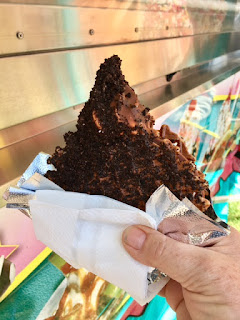 Man oh man ..... that first bite was delicious!  There is both vanilla and chocolate soft serve between two thin six inch waffles.  For $9.50 it SHOULD have been good ... and it WAS!!  I ate the WHOLE THING!! 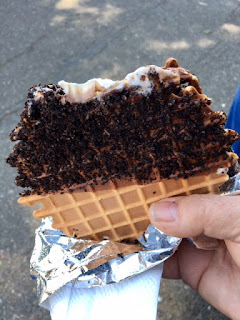 Of course no fair would be worth it's salt without barbecued turkey legs.  This is where I got the trip-tip sandwich. 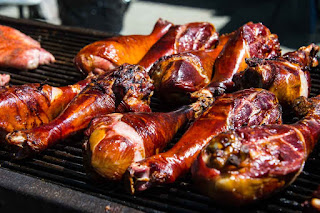 By now it's time to go since all our time was spent inside the building.  My friends granddaughter was showing two sheep, so we stopped on the way out to say hello ... to the sheep that is. 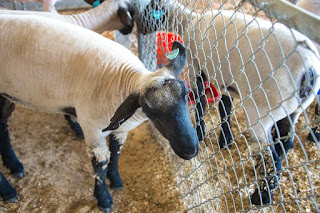 These were all 4-H animals ... lambs, pigs, chickens, bunnies ... the usual Fair fare.  Definitely fat as little piggies.  When I was in 4-H, I had a small baby heifer right off the Arizona rangeland.  My brother, who was in FFA by then (where girls were not allowed) had not one, but TWO huge beef steers.

I got third place ... YAY for me ... except there were only TWO of us in the class.  No one told me heifers were not allowed.  Not that I had a choice in the matter.  My brothers big steers got Reserve Champion.  That's how it was way back when girls weren't allowed in a man's world. 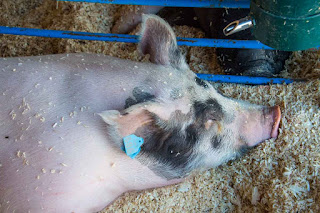 I'm off to have my blood pressure officially checked this morning.  It's important.  I just had a friend who did NOT check his blood pressure, end up in the hospital at death's door.  His was so high it killed his kidneys and he almost died.  Thanks to a friend of a friend (not even a relative) he had a transplant and survived.  Get your blood pressure checked!!!