The Spoils Of War

There's nothing like waking up to a soggy wet ball being shoved in your ear while trying to eek out the last couple minutes of sleep on the couch.  This kid jumps down around 3:30 am, and not so quietly plays with his ball until he decides it's time I join in the fun.

I'm determined it's back to the bedroom tonight since he's afraid to jump down from atop the bed.  I have a large ottoman I'll set up at the end for Jessie ... not that she'll use it, but I REALLY need some good sleep. 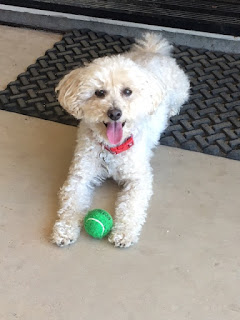 I spent most of the day sewing and working in the back yard.  I discovered three of the sprinklers the gardeners fixed were not working at all.  Come on guys, you're going to let a WOMAN show you how to fix them??  Today I'll hit up Lowes if I can gather up the strength after last night's fun at the Elks Cinco de Mayo party.

Carnitas is one of the best foods on the planet.  Our construction crew, all from Mexico, would cook up the most fabulous meal imaginable in a big copper pot.  Twice a year they would buy a pig, bring their pots out to the rock plant and spend all day cooking.  Lard is the name of the game!

Once the lard was hot enough, they dumped in big pieces of pork and let it cook until you could see the browning around the edges.  Next they dumped in a huge bottle of coca cola.  When the meat was cooked just right, they took it out with tongs and dunked it into a big pot filled with lime juice and water ... to cut the grease they said.

Honestly, it was the best carnitas ever, nestled in corn tortillas with hot salsa, Mexican rice and homemade refried beans.  YUM YUM!!

What they cooked last night, also in copper pots, was close, but not quite as flavorful.  That didn't keep me from stuffing my face however.  Lucky for me, one tortilla was burned beyond recognition so I only ate two.  In no time I was miserable!!!  It just takes too long for the brain to say enough.  By the time it all hit bottom, I was in serious trouble.

The perfect time to sit through a raffle.  One of the guys gave me half his tickets.  The first time they called my number I didn't believe it.  I never win at these things.  They deposited a beautiful bottle of tequila in front of me.

Then they called one of my numbers AGAIN!  This time a bottle of somebody Rosa red wine.  I slid that bottle to the guy on the right.  For the third time, one of my numbers was called.  Maybe I should be heading to Vegas!!  A huge case of Corona was placed in front of me.  I slid that to the guy on the right again .... after all, he paid for the tickets.

The last grand prize was two tickets to a Giants Baseball game in June.  It was won by one of my Bingo cohorts who is a diehard Cubs fan.  They're yours he said.  YOURS!!  I accepted gracefully and slid the bottle of tequila over to him.  A good trade he said.  Talk about the spoils of war .... I came home loaded!!

I checked the seat numbers on the tickets, since where you sit is all important.  Having been a season ticket holder, I knew the park like the back of my hand.  Not the best seats, but who cares, it's Giants Baseball.  That's when a lady came running up begging me to switch prizes with her.

She was there because one of her kids had won over $200 for writing an essay for the Elks about patriotism.  That ranks pretty high in my book.  She said her family actually had tickets to that game, but not enough for all five to attend.  If I switched with her, they could all go.  How could I turn her down?

I checked with the guy who gave them to me and he agreed I should switch.  Definitely not a good trade, since I came home with another lunch box, some solar pathway lights, an LED motion sensor light, a bottle of Merlot and a key knife ... who's ever seen a key knife???

It's okay though, she was thrilled, jumping up and down hugging me, while her whole family poured out thank you's.  Where's the Merlot?  It went the way of the tequila. 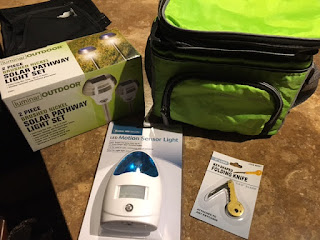 What ruined the night was cupcakes!!  I was already full and miserable, just looking forward to unbuttoning my too tight pants, when out came a huge box to celebrate birthdays of three officers.  Try as I might to abstain, they were having none of it.  My stomach still hurts nine hours later, not to mention my purple tongue that didn't go away even after brushing my teeth!! 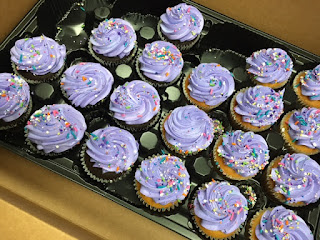 I'm going to set up the solar lights, install the LED motion detector somewhere and try out my new knife.  The bag will be thrown in the closet along with the other nine I currently have.  A bottle of Rolaids should round out the morning nicely.