A Marathon Of A Meeting

I finally got a great night's sleep in my bed!  That little trick of exercising in the morning seems to be working on my hip.  I ran just a tad over a mile, impressing the kids waiting for their school bus with my rapid speed of a really slow jog.

I spent hours and hours running through a nearby neighborhood when I was training for marathons.  It's pretty boring, in spite of changing the route every day.  It hasn't gotten any better.  The bankrupt house on the next street over is still bankrupt and a mess on the outside ... I can't imagine what the inside looks like! 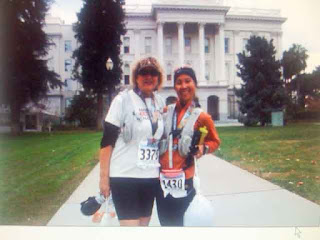 There are still 25 people in one house with 9 cars parked out front and the guy who had wood chips delivered in place of lawn, still hasn't leveled them out after six years.  No matter, if it helps keep my hips swiveling, I'm okay with boring.

This is me and my friend after a grueling 26.2 miler in Sacramento in 35 degree weather with a little rain thrown in for good luck.  Everyone else was throwing off their jackets (they are donated to the homeless) ... we picked up two along with some gloves to keep from freezing!!  I finished in the required six hours, then drove two hours home.

At any rate, all that prepared me for the brick wall I was up against last night at the Elks Lodge meeting.  I was worried about bringing the subject up ... I mean really, these guys are not going into the future without being drug like a calf on the end of a rope at branding time.

Prince Charming came to my rescue and approached the subject.  I then dumped all my failed tickets on them, recounted the fight and our current request for the return of $100 that was never taken.  I recounted my "no official capacity" story, but got slammed for "who are you to contact our company".

I invited them to Tuesday night Bingo to run the debit card machine.  How funny, they declined.  Finally I discovered I had an ace in the hole (a trustee member) who recommended I look into it and test the waters.  YAY for my side!!

The two in charge finally said they had convinced Comcast something was wrong (it's been over a year this has been happening) and it was discovered instead of 5 separate lines, we only had three with two "hunter" lines, meaning when a call goes over them, they "hunt" for an open line.  In turn, that means credit/debit card machines do not work.  No kidding!!!  Supposedly they fixed it yesterday.  We shall see come Tuesday night.

With one last kick in my side, the one who had been "working" on it said he HAD been working on it, just so I KNOW.  Yeah ... for over a year with no results.  I think he got wind last Tuesday I was going to raise cain at the Board meeting and figured he better do something quick.

At any rate, it all ended well.  If the machine doesn't work Tuesday night, I am now OFFICIALLY authorized to talk to the company and get a wireless unit for Bingo.  SUCCESS!!!!!

I'm off this morning for a marathon day at the May Fair west of Sacramento.  I'm not really looking forward to all that driving, even if I DID get some sleep, but promised my friend I would go since I have declined her offer five times previously.  No worries, if I get tired, I'll just pull over for a quick nap!!