It was an exciting day yesterday .... I held the couch down all day long.  Truthfully, I've been counting down the minutes until Miss Jessie can get her stitches out and we are able to move back to the bed.

It's funny how when you sleep in different parts of your house, you hear noises ... strange noises.  In the bedroom there is always one big pop around 10:00.  The trusses or maybe 2x6's relaxing after a hard day of holding up the roof.

It's another story altogether in the living room.  There's a snap in the fireplace (the pilot light is off) and something groaning in the kitchen.  All of which make up an interesting night's sleep.

Needless to say, I wasn't going anywhere ... until my quilter called.  She had finished three quilts.  Time to get the binding on.  This one went pretty quickly because it's so small.  Needles and I get along like teddy bear cholla and flesh.  They are always sticking me every time I turn around.  It's a good thing this is just going to be a wall hanging, since I'm sure the edges have a good sampling of my DNA. 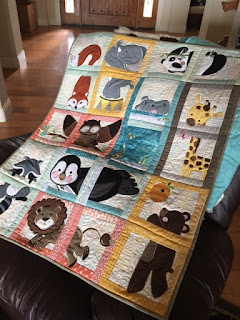 I went outside a couple of times with the puppies, mostly to assess the damage the gardeners inflicted.  Surprisingly, they did just what I asked ... trimmed the bushes and repaired the sprinklers.  I should have looked just a tad bit further.

I began the binding of this quilt when the Giants/Dodgers baseball game came on.  After our crazy loss at 15-6 with our third baseman becoming the pitcher (!!!!!!!!!) I wasn't looking forward to a great game.  It happens that was a bad day for Giants Pitchers and it was also a double header.

Not wanting to use up ALL their pitchers before the second game, they asked for volunteers.  Panda, as he has become known, said he could pitch.  He plays third base.  How many coaches would say OK ... you go right out there and kick some butt.  AND HE DID!

To the amazement and entertainment of everyone, he pitched like he had done it all his life.  Three up, three down and even a strikeout with a curve ball to be envied.  The Dodgers were getting into the fun and much as the Giants!!

The second game the Dodgers were a sure bet winner ... but not this time.  The Baseball Gods looked down in favor as the Giants won.  Yesterday was the last game in the series and the Giants WON AGAIN, winning the series.  How is that possible??

Lucky for me, that took all the pain away from the 89 needle sticks I took to my fingers, enough to finally poke a big hole in the tip of one.  I switched to pushing with the next finger, but I was soon to run out of digits.

Yes they make things called thimbles ... even a bandaid will help.  For some reason however, every time I go to push the needle, I switch to a "naked" finger.  Something in my brain says the thimble finger is occupied.

Isn't this cute?  It's quilted with horseshoes!!  Two down and one to go, until she calls to say the other 12 are done. 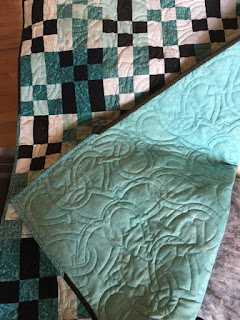 Missy girl gets her stitches out this morning, and I'm contemplating asked the Vet to repair my finger. It would be nice if this means the end of the couch bed, but I'm afraid it does not.  She jumped down off the couch two days ago before I could grab her, spraining her right front foot.  She's been limping ever since.  Jumping off a three foot high bed will be disaster, so it's back to the couch for a couple more days.  UGH ........ 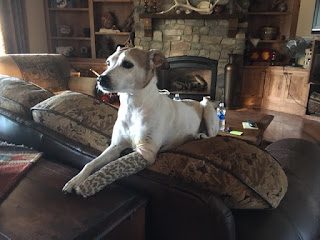 About the gardener?  Last night when I went to bed, I noticed my outside garden lights were only lit on one side.  Are you kidding me?  Those darn guys, in cutting back the bush on one side, AGAIN cut the wires.  I'm mad as a wet hen!!  It cost me $110 last time this happened.  Wait until I get ahold of them!!!!!