Anyone ever take this stuff?  Ewwwwwwwwwwwww!!!  Sorry, but it's not on the list of things I want to put in my mouth.  Why bring this up?  Because after getting my test results, the Doctor's office called and said I should be taking this TWICE a day.  Obviously, they have never taken it themselves.

So what better to do than dive right in to the paleo diet.  Not the cake, in spite of how "yummy" it looks (?????) but it was Stag Day at the Elks RV Park.  It's a hold out from the old days of the men only club.

If you were a male member of the club, you were a Stag.  One day out of the year, you got a FREE steak dinner for your dues.  Nowadays the ladies are also invited to join but the name never changed. The free steak dinner with brown lettuce salad, a great bowl of beans and a roll sans butter (meaning without) really wasn't worth our $148 a year dues.  Oh wait .... there was free beer!!

Who knows how to deliver a glass of beer from a keg?  I got a first hand lesson and ended up pouring for the long line of beer drinkers.  Little to no foam I might add!!

Then there was the cake!!  I think the person who baked and decorated these had one too many jello shots.  Hey ... in my book, cake is cake.  Frosting only makes it better.  It was all good until I took the first bite.  The bottom quarter inch was burned black.  Probably a good thing since it's not on my diet anyway.  I ate just the frosting. 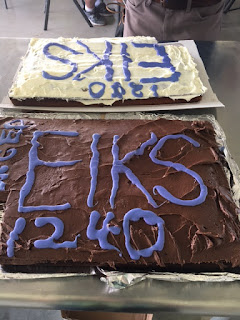 About half of our Bingo crew showed up, so we pooled our money and waited for the raffle.  There's ALWAYS a raffle.  Prince Charming gave me his tickets and said I could keep anything I won.  Last year it was a $14 collapsible camping chair that collapsed the first time I sat in it!!  It's okay, I was just thrilled to win something!!

THIS year it was solar lights from Walmart.com.  I figured there were only four, but once I got the box open and dumped everything on the table, there were SIX!!  I promptly set them up in the back yard.  They don't really put out a lot of light, but the pattern they make on the concrete is pretty.  MUCH better than a collapsible chair! 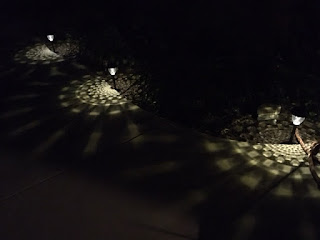 Today will be rest and relaxation day, gearing up for the Magic Kingdom tomorrow night.  By the way, my New York Steak was cooked perfectly.  A good start to the Paleo diet!!