It was a distinctly different day yesterday.  We really haven't had seasons here in California for many years, nor has it rained much over the last ten or twelve years.  That should be no surprise.  When the first settlers came to this big valley, it was mostly desert.

All of a sudden, THIS year the earth has turned enough to provide us with gallons upon gallons of water.  Luckily I live in a sandy soil area and haven't seen any flooding or major problems, except my floor.

It's been a beautiful sunny 70 degrees every day until the skies opened up and dumped at least an inch on my house.  One minute it looked like this albeit windy ...... 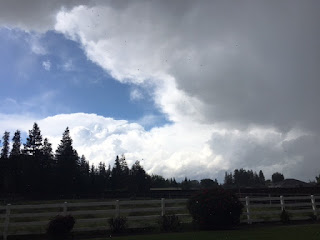 And ten minutes later it looked like this.  The rain came down harder than I've ever seen it before.  We were slammed for about three hours. 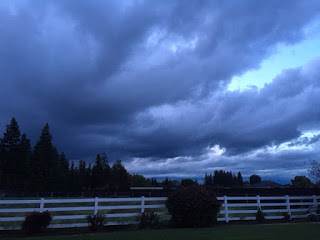 Rivers poured off the roof.  It was a good day to stay inside and watch baseball games in dryer sections of the country.  Except .... I forgot to close the vent on the rig.  OH NO!!  I ran outside, got totally soaked, closed the vent and cleaned up the water on the floor.  No biggie!!

Just for fun, I took a look at the ice storm taking over the East Coast of Canada and the US.  YIKES!!  I'm glad I don't live in THAT region! 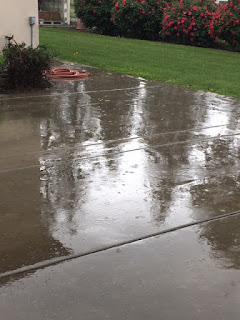 In no time there was a loud racket outside and hail was coming down.  That's weird, it's not cold enough for hail!  You can see it melted rather quickly.  That's when the thunder began.  Huge rolling claps so loud the puppies jumped up and started barking!!

Lightning flashed all around, but not over my house, thank goodness.  It was almost scary, not having been around anything like that in so many years. 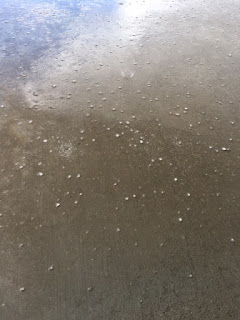 A little rock painting, a little sewing and a little baseball rounded out the day.  OH ... so exciting!! 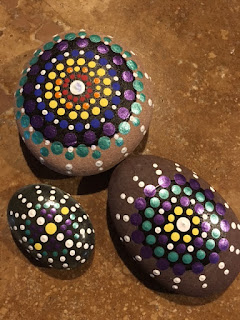 Wait .... I did do one more thing.  I paid for my Jeep license plate sticker over a month ago and have not received my tags.  Also, in the frantic act of throwing stuff away, I actually discovered the lien release on my truck, signed in 2012.  A trip to the dreaded DMV office is in order.

Our office has the distinction of being the worst on the planet for rude people and waiting in line, which goes down the street and around the corner.  The last time I made an appointment, I only had to wait one day.  THIS time as I tried to navigate their website, I discovered I would have to wait two weeks.  Apparently they have decided they were making too many appointments every day, causing way too much work.

I dread going there ... it makes my blood pressure rise and my hair fall out.  I have never had the correct paperwork and it requires two or three trips for every transaction.  To make matters worse, I now understand they have NO paper titles for vehicles.  It's all electronic.  With their track record, I don't see how this is going to work well at all.  Wish me luck.

I'm off today to the Magic Kingdom of Bingo.  I think I'll check with the local gurus and gather a few talismans to bring good luck into my house.  I can use all the help I can get!