Tales Of The Old West

I've been cleaning and cleaning ... trying to get rid of all the superfluous junk I have saved over the years.  I have a stack of twenty one cords, all neatly wrapped up, with no clue whatsoever of the device they go to.  I'm afraid to throw them out, because like with the TV remote control, I will probably need it once in my life.

That's when these reminders of the Ranch came out of nowhere.  My mom had an old Brownie camera that she used mostly on vacations (when we were able to leave the cattle, which wasn't very often) and on an occasional holiday.

That's me on the right.  My only sibling is in the middle.  The really cute kid on the left is neighbor Danny who came to visit often.  He lived for riding horses and being part of the posse on the ranch.  I can't tell you how many bank robbers we captured and locked up in the saddle house "jail".  Check out that Christmas tree.  We never had a bushy one ... it was always with wide open spaces.

Santa brought us one present each year, accompanied by a stocking full of whole walnuts and oranges.  It was taped to the card table set up in the middle of the living room so Santa would have easy access.  I still have the stocking I put up every year on my fireplace. 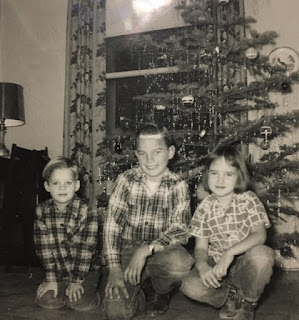 Did you notice I'm wearing my brothers jeans and shirt?  On occasion old family friends from the original ranch in the high desert of California came to visit.  If you have ever been to Lake Isabella, you've been to our ranch.  It's at the bottom of the lake.  That's when we were forced to move.

Dad had a choice of a place in Nevada with a nice house, or a place in California with a nice set of scales to weigh cattle for sale.  The scales won out, to the distress of my mother.  Us kids loved it ... there were corrals everywhere (you can barely see some in the background) that we climbed up and walked on for hours.  Amazingly, no one ever fell off or got hurt.

Now THIS is a funny picture.  That's tall Bonnie in the middle, Jimmy on the left, Dennis and George on the right with me in the front.  With no toys to play with, we would gather eucalyptus tree berries in any container we could find and have wars.  We would sneak around trying to catch someone unaware and thrash them with a handful of rock hard "bullets".  The tree limbs helped camouflage us from the opposition. 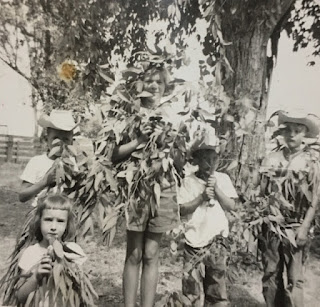 Maybe a year later, Dad tied blocks on the floor pedals of our 1940 something Jeep (shot full of bullet holes from the war I might add) so us kids could drive it to check the irrigation water.  I drove it straight into a tree.  Didn't even make a dent. 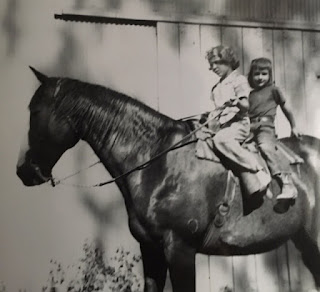 On occasion I was forced to wear a dress, which I hated.  This was Easter so we had to dress up for church.  The second we got home, I was back in boots and levis, walking the top of the fence.  The puppy is Champ of cow dog fame.  Both of our dogs worked cattle with us.  Just say get 'em and point ... the dogs would gather up even the wildest cow much faster than we could on horses.

Since we had chickens (one of my chores was to gather eggs every night) and it didn't really cost anything, we got to color Easter eggs, which were hidden by the Easter bunny while we were at church.  Usually there were just eggs, but once in awhile we would find a little piece of chocolate!  That was the Howdy Doody of Easter for us!! 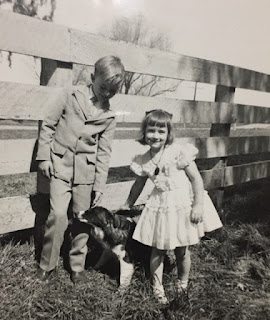 Summer nights in those days were spent sleeping on old army cots in the back yard.  One morning our hired help's son came to tell me Pico had died.  I was never the same.  My love of horses was ingrained early and has never left me.

It was fun poking through the old pictures.  Sadly, it was the end of an era, as cowboys and Indians no longer roam the ranch.  Big tractors now cruise the land discing the soil for tomatoes and sweet potatoes.

On a better note, I think I have FINALLY figured out the light switch timer.  The MODE button is really the SETUP button.  They are all so tiny you need a magnifying glass to read them.  Last night the lights came on and amazingly this morning, they were STILL on at 5:00 am.  I'm on my way to see if they turned off.  Eureka ... we're in business again!!!