A Nail Biter To The Very End!!

Since having Dish Network set up, I'm taking complete advantage of the $175 MLB Baseball package to watch every game I can.  Not that I really want to sit on the couch all day, I just want to watch the Giants daily game.  Don't judge ... it gives me something to do and gets my heart going when the umpire makes a bad call!!

While waiting for the game to start yesterday, I figured to get some yard work done.  It's probably second to the thing I hate most ..... house cleaning.  Yard cleaning is not rated high on my list of things I like to do.

I WOULD really like to have this beautiful tree in my back yard however.  Anyone know what it might be?  I thought maybe dogwood, only because it doesn't look like an ornamental cherry.  I kind of sound like I know what I'm talking about, right?  Wrong .... I have no clue.  Those were just some words I heard my friend Cyndae bandy about. 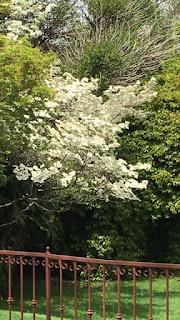 So this is what MY yard looks like.  Everything is overgrown because my lovely gardeners don't seem to want to trim the bushes until they are a complete mess.  I started hacking and chopping this lavender yesterday and will continue today.  My thought is to leave it all smack dab in the middle of the lawn, so when they come to mow, they will have to clean up the mess first. 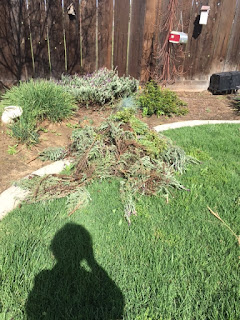 Finally, the game was ON!!  I became a Giants season ticket holder back in 2006 when they couldn't play worth a darn and had Manager after Manager that was questionable at best.  No one went to the games.  It was good for me, since how else could I afford to buy in?  With their record, people were giving away the seats.

Here's how it works .... you buy the seats like real estate (which can be passed down to your family members), which allows you to purchase all the tickets for the season, including any extras like the World Series (I got to attend three WS games) .  Unfortunately, you have to pay their price.  Two years of NOT buying the tickets, and they take away your purchase privileges. 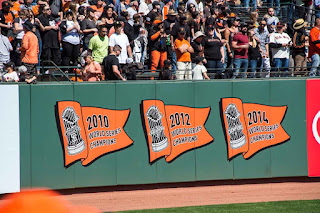 Pretty boring to watch on television, but when you get to the ball park full of screaming fans, all of which you have something in common with, it's a different story.  It's exciting ... you yell even when you don't mean to.  You jump up and down and high five everyone around you when they score.  It's a fascinating study in human psychology. 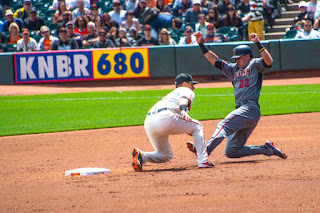 I of course always took my camera and long lens to try and gets shots like these.  I won't bore you with all the cool pictures I have of some amazing players. 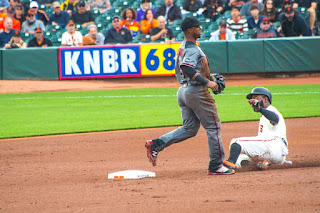 Finally comfy on the couch with the puppies, the game began .... Giants against their biggest rivals, the Los Angeles Dodgers.  The crowd goes crazy when these two teams play.  The Giants scored first and by the end of the ninth inning, they were tied.  Both teams got runners on base, but no one could get all the way around to touch the magical home base to win.

Here's a sample of the energy and love the fans have for their players.  Hunter Pence happens to be one of the really good guys who spurs the team on to winning.  I do believe this sign is correct. 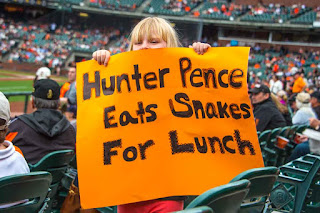 Tenth inning .... Eleventh inning ... on and on they struggled.  When the Dodgers finally scored, the Giants would tie it up.  At long last in the FOURTEENTH inning (even "I" was exhausted from shouting at the TV), the player least expected to hit the ball and get on base, not only accomplished his task, but stole a base.  The last guy to go up to bat hit a WALK OFF HOME RUN.  SCORE!!!!  The Giants won!!!!

Five and a half hours after the start of the game, I jumped up and yelled BEAT LA before crashing into bed.  I'll be back on the couch today.  Maybe I should move that rowing machine from the bedroom to the living room and at least get some exercise while I watch ......

After I slaughter a few more bushes!!