SURPRISE!!  The kids got me up at 3:45 am.  You need an alarm clock?  I have one for you.  Two in fact!  I had no choice but to get up when both of them started walking all over me.  Yeah, we're still on the couch.  Good grief guys ... it's not time!  Apparently they don't speak English.

With everyone fed and watered, I sat down with my coffee to contemplate my plan of attack for the gardener.

In the meantime, SURPRISE!!  Cooper you're getting a haircut!  Definitely not on his list of favorite things to do, Cooper balked as I chased him around the living room trying to get close enough to grab him.  I tried to be real sneaky about getting out the clippers and setting up the table, but alas, he figured me out immediately. 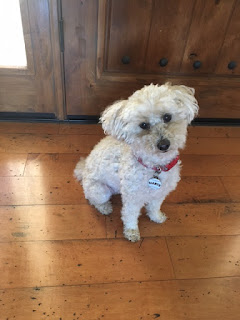 In spite of everything I've been told by the three people who have clipped him in the past, he doesn't move around at all.  He stood perfectly still the entire time.  Good boy Cooper!!  Of course he is nine years old, so he does have some experience.  Unfortunately, I haven't improved much at all in the art of haircutting. 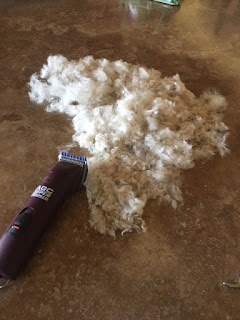 I sat around all morning waiting to pounce on the gardeners who finally showed up at noon.  I pointed out the broken sprinkler heads because the grass is so tall the pop-up stays up and his mower chops it off.  Just to instill that fact, I cut around every sprinkler head and left the chunks of dirt and grass in a heap.  He promised to keep them clean with the weed-eater and SURPRISE, he replaced both at no charge.  YAY!  Like I was going to pay, right?

Next up, trim the bushes back.  They are so big, they completely block three sprinklers.  Come on guys, this isn't rocket science.  Or maybe it IS!!!

I got out my weed sprayer, mixed up a batch and sprayed a total of three gallons on every weed I could find.  Round-Up is my friend.  Finally satisfied that the yard was getting back in shape, I hit the drip lines through the flower beds.  SURPRISE!  Four heads were blown completely off and water was going everywhere.  No surprise, really.

If it were me, I would replace the entire setup, but it IS me and I'm cheap.  I just keep plugging holes and adding on, cutting out sections that are broken.  Hey ... it works, which is why they need to cut the bushes back.

Last surprise .... no surprise really ... I finished the Paris quilt.  I feel much better that the quilter never did find my big mistake.  That beautiful inexpensive backing I found, so soft and silky, turned into a nightmare.

SURPRISE!!  The edges frayed just looking at it.  By the time I got half way around, I was gathering up dozens of long strings and trying to encase them in the binding.  What a mess that was!  I probably stuck myself with the needle fifty times.

Thankfully, it's finally done.  I have to say it IS rather soft and silky, but I'll never buy any of that material again! 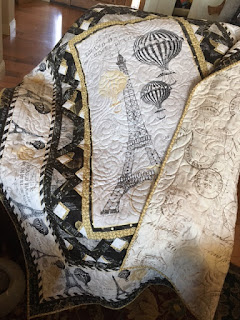 By the end of the day, I must have been rummy ... I thought what a good idea it would be to make my own tortillas.  What was I thinking??  I must have inhaled too much Round Up!!  I'll tell you all about it tomorrow!