Sometimes I Surprise Myself

Having found out I could drop one of my television providers and just tack on my service to Dish Network in Arizona for a measly $7 a month (instead of the current $60), I disconnected everything and called for a hookup.   Seems they don't use the same antennas.  Dish sent out a service guy at 8:00 the next morning.  That was fast.

Are they all that handsome or is it just me?  At any rate, he made me extremely happy when he said he would use the same bracketing system, unlike Direct who wanted to drill all new holes in my garage roof (which I had refused to do).

Yes I did ask him if he needed a taller ladder, but he said he does this all the time.  He's young and probably has better balance than us old folks.  In less than an hour he had me set up.  I have to give it up for Dish Network service.  They just put DirectTV to shame. 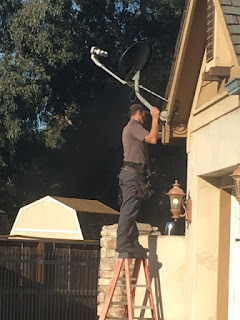 I did have one minor setback.  I have a receiver for surround sound, a DVD player, the Dish receiver and something else in the stack, all of which are controlled by this beauty.  Unfortunately, it doesn't work on Dish unless I reprogram it.  It was a gift five years ago and it came already programmed for the equipment I have.  The install guy said it had to be downloaded to my computer and then installed on the unit.  Oh boy ... this is NOT something I want to attempt.

I used two remotes for all of ten minutes before hitting the computer to see if this was something I could accomplish, being rather technically challenged at times.  Two hours later, most of which was spent looking for a USB cable that would fit in the little hole, by George I got it!!!  YAY ... it even works.  I'm pretty proud of THAT one!!! 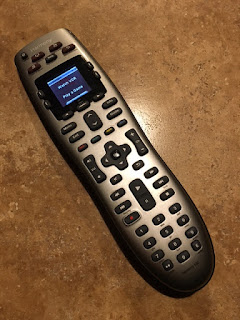 Next up ... add the MLB Extra Innings Baseball package.  I know most, if not all of you, are not the least bit interested in baseball.  I wasn't either until I became a season ticket holder, went to lots of games and came to know most of the players.  That makes all the difference.

It was no problem getting it added, which it did in a matter of seconds, but alas, MLB and the Giants black out all of their home games (86 out of 172) in this area so you will go to the park and buy tickets.  RATS!!!  There just HAS to be a way.

I went out to the RV and set up my TV there (remember it's also Dish) and amazingly, the Giants game was on.  So why do I get it in the RV and NOT in the house?  I pondered that for some time.  Maybe it's the type of antenna?  Maybe the receiver itself?  I've no idea, but there MUST be a way.

Finally, in my devious little mind, I decided to call Dish, explain that I have two houses, one of which is a rental, and I need the service address to be the rental address, you know, for tax purposes.  Oh I understand perfectly she said, and changed the address.

It was magic I tell you ..... MAGIC!!  The Giants game instantly came on!!  I assume that's because that address is out of the area.  I now get to watch all 86 of those home games.  Of course I don't get any local channels because I'm out of THAT area, but that's okay since I rarely watch the news anyway.  There's just no reason to become depressed.

So all in all it was a nice electronically exhilarating day and the giants won!!  Sometimes I surprise myself that I can figure these things out.  Cooper didn't care in the least ... he just sat on the back of the couch next to me and protected his ball. 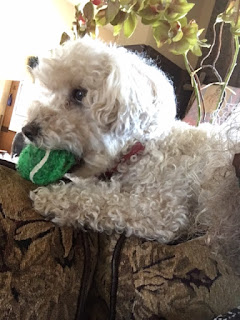 My next challenge?  Get my truck running again ..... I'm not the best in that department either, but as you know, I'll try just about anything.