Having washed the chairs (sorry, no clean picture) and removed dozens of spiders, I sprayed the holes just to be sure there was no one lurking around to bite someone in the butt.  Next was to load them into my truck for delivery.

These puppies are made from mostly 2 x 4's and 2 x 6's ... in order words, HEAVY.  I was puffing like an old lady when I got them in the truck and tied down.  The entire set, four chairs and a coffee table, are being adopted by my long time friend's daughter that lived with me for awhile.  She's a sweetheart, and when I heard she had just moved into a new house with a huge back yard, I figured that was the spot for these.  Yup ... I'm moving things out. 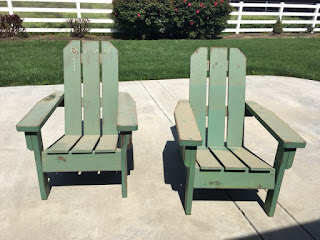 Next up ... my Doctor's appointment to explain why I quit taking the Lipitor he prescribed for my cholesterol that was over the top at 300.  What can I say, I LOVE ice cream.  There really wasn't any meat involved ... I eat mostly chicken.

I dread going there ... last time we had a huge confrontation when he left me sitting in the room for two hours.  Unacceptable in my book and I let him have it with both feet!!  This time was a tad bit better.  I heard the nurse tell him Room 1 was waiting.  Thirty minutes later she announced it again before he finally showed.

He's a nice guy ... he just spends WAY too much time chit chatting with the locals.  Not happy I quit the drugs, he ordered sixteen vials of blood to be withdrawn by his vampires.  I was lucky to be able to walk out alive.  We'll see what the numbers are, then he wants me to try it again.  He insists it's just coincidence that the eye twitching quit when I quit the drugs.

Then there's the old blood pressure, which seems to keep rising like my candy thermometer when I'm making peanut brittle.  Just what I need .... ANOTHER pill to take.  Since my diet has changed so drastically ... chicken and vegetables with a little meatloaf thrown in, not to mention reducing the portions by half and eating just a little phony ice cream (Skinny Cow) .... I'm hoping my numbers will be good.  He also said NO SALT!!  Not that I use that much anyway, but NO SALT?  Geeeezzzzz

At last check after 5 months of the cholesterol busting drugs, my number was down to 220.  I'm hoping the diet is working so more drugs won't be involved.

One thing I am loving ... this office is certainly high tech for being so old.  I check in on-line, no more standing around in the germ infested waiting room.  I still do however have to use my shirt to open the door to exit.  I'm not taking ANY chances!! 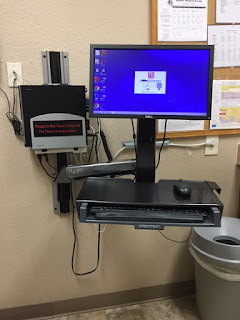 So here's my first try at cloning the Nutrisystem broccoli stuffed chicken.  Broccoli, parmesan cheese and a tad bit of low fat cream cheese stuffed into holes I cut in the chicken.  I set them upright so the delicious filling wouldn't melt and end up on the pan.

I needn't have worried, since I used too much parmesan and it became like a brick.  Those little blue spots?  Yeah, well that came from the toothpicks I used to keep them closed since I accidentally cut all the way through two of them.  Who would have thought the colors would run???  I'm hoping it's not poisonous!!

For my first try, they were horrible.  Dry like the Arizona desert they were, making them extremely difficult to swallow.  I sent Chef Patty a message and she suggested mayo.  That's a GREAT idea, except it's not on the allowable cholesterol list of edible things.  Butter, or maybe ranch dressing, all wonderful ideas that would probably be nixed by the Doctor too.  I'll try barbecue sauce instead. 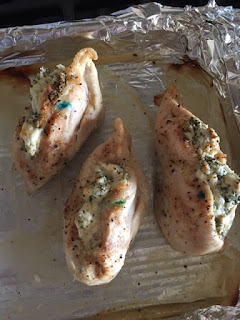 I'm thinking in the long run, I'll probably be eating Nutrisystem frozen food for the rest of my life.  How about cake?  Can I eat cake?????