Does It Ever End?

Repairs and even MORE repairs.  I suppose it doesn't matter whether you have a house, an apartment, a motorhome, a car or a truck, there are always repairs that need to be done.  I've said this before, but it seems they just don't build things like they used to.

I'm a truck person.  I LOVE LOVE driving my truck and take it everywhere when I'm home.  Unfortunately, they are not cheap, not inexpensive and not even EXPENSIVE.  They are OVER THE MOON EXPENSIVE.

I've been lucky enough in my life to have worked at good paying jobs where I have been able to afford a truck since I was 30-something.  When I purchased this diesel rig, I figured it would last the rest of my life.  After all, it takes some time for me to get 100,000 miles on a vehicle and this should go 300,000.

Turns out I was wrong.  Although this baby only has 105,000 miles, I'm ready to trade her in.  She hasn't had too many huge expenses, but of late she has been sickly.  There's not one, but TWO batteries to keep her going, which I replaced not long ago and she had a pricey knee operation on one front wheel.

Lately she hasn't been wanting to start up ... kind of like me every morning.  Come to find out she wasn't holding the prime, which keeps fuel in the lines.  One of my good Elks friends came over and replaced one seal, which worked for awhile. 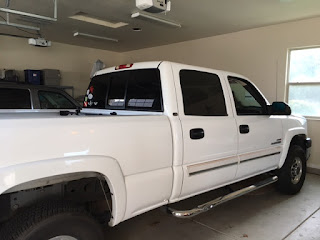 Unfortunately in the last three months, the second seal went out.  So under the hood, there is a little round disc that you pump to bring fuel into the lines so it will start.  I climbed up my ladder, leaned over the engine and pumped for all I was worth.

Apparently I'm pretty good at pumping, because soon fuel began running out on the ground.  POURING out on the ground.  OH NO!!  It's not supposed to do that.  Now I'm afraid to start it because the fuel will catch fire.  In the back of my head something said no, diesel doesn't explode like gas ... give it a shot.  Thankfully it started and there was no big fire!!  The fuel quit running out ... for now.

With no choice, I drove it straight to the GMC repair shop in town.  They seem to be pretty good and they cost the same as everyone else.  $388 dollars later (they replaced the entire pump, not just the seals) it starts just fine.  I'm SO happy to have her back and running.

Get rid of my truck you say?  Ahhhhhhh NO!  I need a truck to go to the dump with "stuff" and to pull my horse trailer.  Yes you are right, I don't have horses any more, but you just never know.  I think I'll keep her for a few more years.