A Little Bit Of Mexico

There's a song .... have another beer in Mexico.  That's probably what I should have done rather than try to bring a taste of Mexico to my kitchen.  I think I have too much time on my hands.  My brain gets going about what food to cook.  What else do you think about when you're on a diet??

I found an Instant Pot recipe for turkey chili verde that seemed to fit the need for something tasty and the required LOW FAT food.  I hit the grocery store running.  There were three kinds of chilis in the recipe, none of which my store had, even though it sits in the middle of California's agriculture land which is populated with millions of hispanics.

I settled for this one whatever it is, which was the only one on the shelf.  I kid you not.  First up, just for authentic flavor, I tossed it on my gas stove for a little char.  It scared me when it started popping and cracking like Kelloggs Rice Krispies.

Nicely black, I dumped it into a plastic bag to sweat the skin off.  I saw that on television once.  It actually worked pretty good.  I smashed the tomatillos in the blender without cutting myself and chopped up some onion.  This is a big stretch for me ... cooking something sort of authentic.

Now for the turkey.  There wasn't any of that either.  Seriously .... there was only ground turkey, which I don't imagine shreds very well.  I substituted chicken.  Into the instant pot it went along with every spice I could think of. 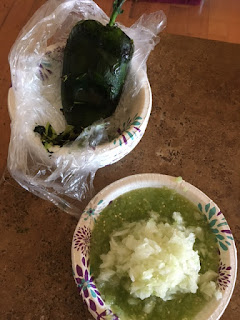 Amazingly, it came out quite tasty.  A little bit of Mexico in my kitchen, topped with avocado and cheese.  I should have stopped right there. 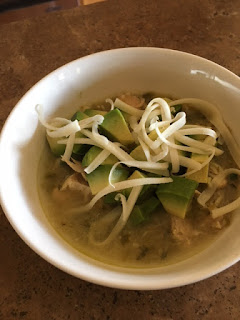 But NO ..... I remembered those tortillas I used to make by the dozen.  Tasty soft lovely flour tortillas, grilled to perfection.  Wouldn't that be nice with chili verde?  I dug out an old recipe.

There's not much to tortillas ... flour, lard, baking powder and salt.  Since I didn't have lard, I checked the fridge for good old Crisco shortening, an acceptable substitute.  I was pretty sure it had been hiding in the back for a long time ... a VERY long time ... but the pull date was still good.

Two minutes in the kitchenmaid mixer and VOILA!!  Tortillas waiting to be rolled out and cooked.  Did I mention I left out most of the salt?  The Doctor said no salt.  Thirty minutes later I was rolling like I knew what I was doing. 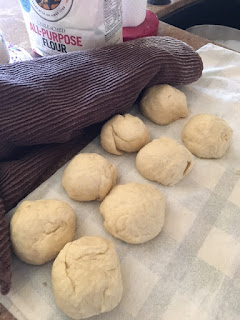 You need something cast-iron-like on which to cook these.  A comal is the best, but mine is in Arizona.  This large very old Wagner frying pan will do the trick.  No oil here ... you cook them dry. 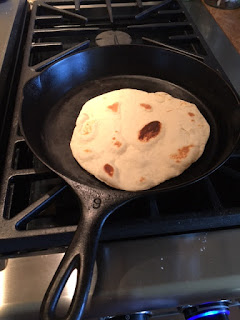 About 30 seconds later (per side) I had a pile of beautiful fresh flour tortillas ready to devour with my dinner of chicken chili verde.  Talk about a taste of Mexico!!

That's when I bit into the first tortilla.  My oh my oh my!  It was all I could do to keep from spitting it on the floor.  Just because it looks good, doesn't mean it TASTES good.  RATS!!!  My taste of Mexico tasted like spoiled mildewy old pieces of cardboard.

My first thought was lack of salt.  Then the light bulb went off.  It was the OLD Crisco shortening I used.  I'm NOT sorry to say these went straight to the cemetery.  I said a few good words about Mexico and some bad about Crisco before dropping them into the spacious hole where they will remain.  A few petals from my rose bushes drifted over the top.  How appropriate. 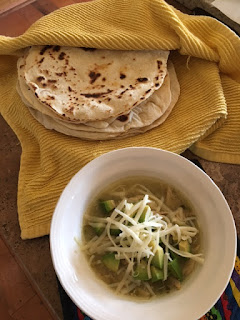 I haven't given up however .... I have at least four more bowls of chicken verde to eat, which is delicious I might add.  Today I'll make a quick run to the Mexican grocery store to pick up some lard.  It's a challenge now ... I HAVE to make tortillas like I did years ago.  This time I'll add salt.