A Shark Comes To The Rescue

I think I probably lost two years of life as I anxiously waited for the contractor to arrive.  The good news is the flooring had dried considerably and was laying flat as it should.  Hopefully it stays that way!

The problem is threefold.  There's been so much rain, even though I have sandy soil, that the water just can't get away fast enough.  Concrete is pretty porous when it comes to water and can suck it up from underneath the house.

Luckily, there are no broken pipes, since all the waterworks are in the ceiling.  To make it worse, when I shut the heat down to 45 degrees, it let the moisture build up inside, which the flooring quickly absorbed.  The three part .... I have a big rug covering that section which also held the moisture in and didn't let it evaporate.

The good news is if I keep the fireplace and fan going (it's a toasty 75 in here), hopefully it will go back to normal with no residual affects.  It WAS a rather sharp rap to my ego however, when he noticed how dirty the floors were from the puppies ... especially Cooper and his soggy ball.

The second he was gone, I headed to Tarshay (Target) to find something to help me clean.  There's over a thousand feet of laminate and my knees said OH NO, PLEASE NOT AGAIN with the damp rags on the floor.

That's when I found THE SHARK!  It's a steam cleaner just made for laminate and stone floors.  I had a similar one previously that exploded on me ... not a nice feeling at all ... so I was a little reluctant until I read all about it.

I took it for a test drive on my bathroom tile floor.  Wasn't I surprised at the dirt and grime that ended up on the cleaning pad.  Here's another cool thing ... lift it up, push a button and the washable pad just falls off on the floor.  Place another one next to it, set it down and magically, it's attached and ready to go. 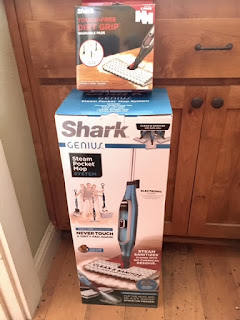 As much as I hate cleaning, this one had me starting on the rest of the house.  With so much house to go, I didn't get far, but boy is my kitchen floor clean and sparkling.  I LIKE IT!!  The best part is it doesn't put out enough steam to damage the floors, just enough to clean really well.  What little steam there is evaporates and is immediately dry.

At $129, it will do double duty, as the tile floors in the rig need a deep cleaning something terrible.  It's a mop ... only better!!  Thank you Shark for coming to the rescue.  Don't worry, I don't plan on using it on that section in the living room until it's summer and 108 degrees.  No use pushing my luck!!