First off, I'm sorry I deleted most of yesterday's post after only a few read it.  I began to feel bad about what I said.  The laugh should have been on me.  It's not nice to make fun of your friends (even if they are not close friends) and even if it was funny.  I'm just trying to clean up my act in my old age.  So ... on to Love Letters .....

Back in March of 1946, some pyrex bowls with a price tag of $2.56 were delivered to Florence and her husband Willie ... a fitting wedding present.  World War II had just come to an end the previous September.

She saved everything ... a hoarder you might say.  When she passed away many years later, she left everything to my father who had also passed.  That meant it all came to my brother and myself.  He went to the house in Petaluma and threw lots of stuff away before I could get there.  Once I arrived, I found a treasure trove in the garbage cans.  I dug it all out. 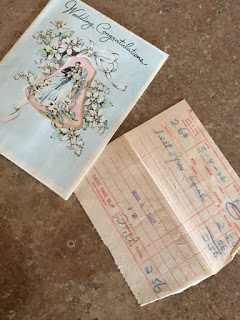 Among the bags were every holiday card she ever received from her husband and friends.  Many have letters written inside.  Postage was 1-1/2 cents.  She also had every post card her mother sent to her as she traveled the world.  Many have dates from 1918 on, all with cancelled postage stamps.  Even the Lusitania is pictured in her cards.  They are things that should be in a museum.

Florence was a Navy WAVE ... Women Accepted For Voluntary Emergency Service, which was established by Congress in 1942.  The idea was that the women would work in shore positions while the men were released to sea duty.

The war ended around 1945 and on February 17, 1946 she and Willie were married.  With the war over, she went to work for the Southern Pacific Railroad Company in Bakersfield California where she grew up.  That didn't work out so well being apart from her husband who was still in the Navy, so she wrote this resignation letter. 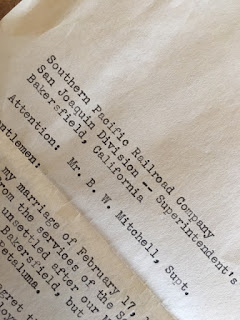 It's fascinating going through all this stuff, reading all the notes and letters she kept.  This one, written on East Bay Area Military Police letterhead, was her acceptance of another position with the railroad in the San Francisco-Petaluma-Bay Area, where she moved to be with her new husband. 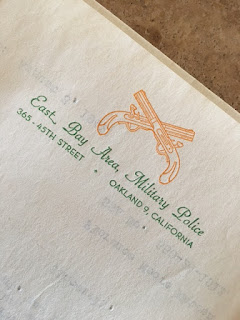 Willie my Wolf, says a lot!!  She even kept the birthday cards she gave to him.  My how cards have changed over the years.  Now they are three times as large and play music for you!! 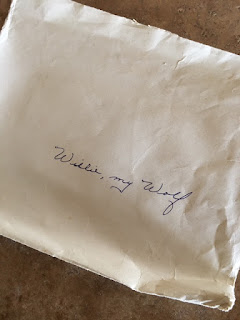 I like this one .... Hello "honey" just trying out my new pen.  I love you.  I love you.  I love you.  Unfortunately, Willie liked to drink and carouse a little too much, and it didn't take long for the marriage to fall apart.  They divorced and Florence never remarried.  She lived with her sister (who never married) until they both passed away. 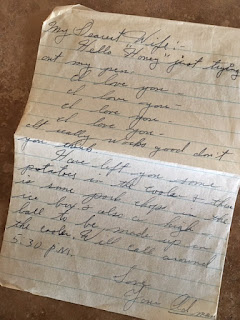 Here's a couple of Christmas cards she received.  Funny, they don't exactly LOOK like Christmas cards.  Florence never went hunting that I know of, so I'm guessing these were from someone who did. 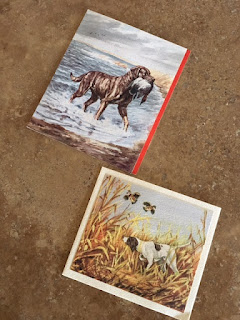 There is a telegram from Western Union congratulating her on her wedding.  It's from Jim in Santa Fe New Mexico along with every single tiny congratulation card she received with wedding presents.  I hate that all of this will probably disappear when I'm gone.  I hope to find someplace to donate it before that happens.

When Florence finally died and we went to the house to clean it out, there was barely room to walk.  It was the typical hoarder's house with boxes full of picture frames stacked clear to the ceiling ... hundreds of them.  There were also spoons ... literally thousands of spoons ... and stacks of canned food like you wouldn't believe.

She had boxes of fabric that I wish I had now.  I didn't really sew back then and it all went to the Salvation Army.  I even found her Navy uniform hanging in the closet.

Every single little thing had a date written on it.  The cupboards and counters were full of canned food, each with a carefully printed "pull date" before it was required.  Even the boxes of macaroni, which were many years old, had dates.  Her scissors had tiny tags with the date of purchase tied on with string.  Literally everything had a date.  Makes you wonder, right?

At any rate, it's Memorial Day weekend and time to remember all of those who have kept us free.  Not only the ones who are fighting overseas today, but those who came before us, even if it was a WAVE who made it possible for another soldier to fight.