My name is Nancy and I'm a hoarder.  Not your typical stuff, I hoard Cowgirl stuff.  It's probably in a misguided attempt to keep everything RANCH in my life.  Truthfully, it's because I was just DEAD SURE I would lose those few pounds and fit back into them.  After all, levis are made of indestructible material and last forever.

Some of these have lasted for over 30 years in my closet.  Crazy, right?  I wore all of these with pride because of my skinny marathon-running figure.  Not so much any more.  I discovered I have nothing in my closet that works for warm weather.  I headed out to Dress Barn, the one place I swore I would never step foot in.

Truth is, it's the only place in 30 miles to buy decent women's clothing.  I tried on all kinds of things I thought I would hate, mostly because I really don't like the "old lady" stuff they carry.  I may be old, but I'm still young in my brain!!

Ninety minutes later I had four skorts which I love ... looks like a skirt but it's shorts.  Follow that with three pair of capris.  I only found two shirts I would wear out in public.  Everything ran about $35 each.

Open an account and you get 10% off, plus I had coupons, plus three items were on sale.  There were so many discounts, the grand total came to a tad over $100.  SCORE!!

Once home, I had to make room for the capris and skorts in my armoire.  Might I say it's huge and a very old antique (it actually breaks down into six pieces for ease of moving) and was full to the brim with levis.  Those same ones I've been trying to get back into for the last 30 years.

Time to get rid of the old, Nancy.  I dumped them all on the floor.  But wait!!!!  I might fit into some of them since I just lost a few pounds.  An hour later I was exhausted.  Good grief ... some of these still had the tags on them but SOME of them actually did fit!!  YAY!!

I'm embarrassed to say there are 43 pair in this big pile that have to go.  The thought did cross my mind to cut them up and make a quilt, but that would be a shame and a big waste of perfectly good levis.  There is certainly enough material, as they are almost all BIG bell bottom jeans.  I told you they were old!!

Cowgirls like their jeans to cover their boots, thus the big bells.   It helps keep the stickers out, keeps your boots clean and it covers your spurs so they don't get caught on something and make you fall down.  I bet you didn't know that little trick! 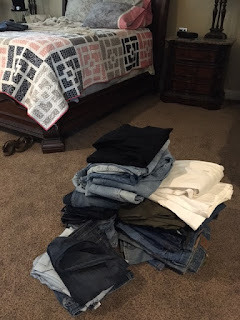 Unfortunately, that only cleared out half the armoire.  I'm still a hoarder with at least that many more remaining.  I know I will probably never fit back into them, but I just can't let them go all at once.  I have to say though, there's nothing like trying on that many jeans that do NOT fit over your hips to help jump start the diet regime again!!

I spent the rest of the afternoon still nursing my stomach that felt like I got kicked by a horse.  I'm NEVER EVER eating that much again!!!  A little sewing helped take my mind off it.  I finished the binding on this minky-backed beauty.  It's sooooooo soft!!! 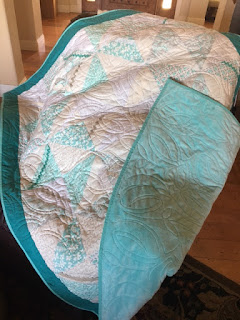 FINALLY the day has come.  At the end of THIS day I get to sleep back in my bed.  Jessie is no longer limping.  I'm also at my wits end with Cooper getting me up at 4:00 am to play the ball game.

P.S.  The Giants beat the Atlanta Braves 9-4 ... the winningest (is that a word?) team in their league right now.  Even with their best pitcher and our team of rag tag guys (most of our starting pitchers are out hurt), they played a GREAT game.  GO GIANTS!!