Cooking with Nancy has become an adventure in itself.  I should start another blog.  True, I only cook turkey once a year, but you would think after 50 some years, I would finally get it right.  This was NOT the year.

It looked pretty enough ... all trussed up and stuffed with my mother's dressing recipe you see below.  That's the easy part.  It's the actual cooking that gets me every time.  Not fifteen minutes after putting it in my 325 degree oven, I smelled the smoke I always dread so much.  How can that be?  I just put the turkey in the oven??? 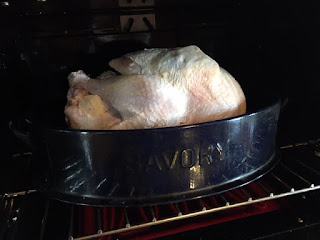 I opened the door to rolling, boiling clouds of smoke hitting me in the face like a Rocky movie.  It fogged my glasses and I couldn't see a thing.  I slammed the door.  OH NO ... the fire alarm is sure to go off.  I hit the exhaust fan switch and turned the oven off.  I should have walked away, but noooo ... I opened the door again to another wave of rolling smoke clouds.

Good grief ... what did I do wrong?  In an instant I knew.  For the first time ever, I decided to place a rack under the turkey.  I never do that, but the turkey sticks to the pan and is hard to get out.  As the turkey heated up and the butter dripped into the now really really hot pan, it made instant smoke.

Don't ask me why, because I have no idea, but I quickly opened a can of chicken stock and dumped it in the pan.  The smoke instantly stopped as the doorbell rang and the alarm began wailing.  Surely THAT much smoke didn't escape my kitchen!!

Thankfully it was just my neighbor looking for some milk and not the Fire Department responding to my alarm, but you should have seen the look on her face when I opened the door and she saw all the smoke!!! 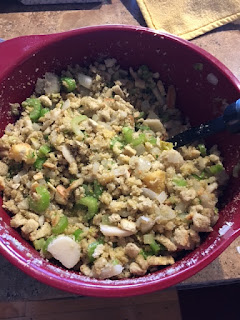 I really tried not to fuss over the turkey, because I was cooking it the way the Sheriff did at the Elks Lodge (he does lots of cooking for us).  I checked the temperature.  Take it out at 160 they said and let it rest 20 minutes.  It was 45 minutes less than the instructions said and I stressed over it the entire time I was making potatoes.  What if it's not done?  Will I get sick?  Oh for heavens sake ... it will be just fine.  Except it wasn't.

I'm not sure if it was the turkey or the off brand butter or I just didn't cook it long enough.  The breast meat was tender and juicy but the flavor was bad ... something like what I like to call GREEN meat.  Grass fed beef tastes terrible ... corn fed is the only way to go.  Either this turkey was bad or it was grass fed and definitely NOT cooked enough. 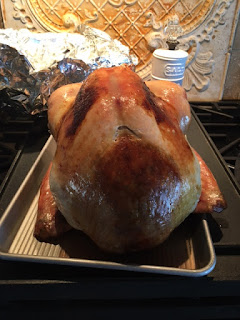 The potatoes and gravy made up for it.  Feeling bad that I didn't have a vegetable, which I could do without, I made a quick salad ... with kale, to counteract the gallon of gravy I planned to eat. 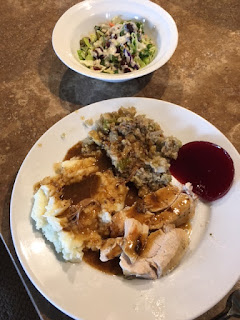 At least part of it was edible enough for me, but I'm sure glad I didn't have company.  What a disaster!!  It appeared the breast meat was done enough, but nothing else was.  I cut all the meat off and wrapped it in foil.  I'll stick it back in the oven for an hour or so tomorrow.  No use being THAT wasteful!!

Sorry you can't get that tune out of your head .... neither can I.