Not your everyday task for sure, but I've done it three days out of four now.  This is Thanksgiving Cooking 101 for 100 people.

The Elks are not cheap ... they purchase Norbest boneless turkey breasts, about 10 pounds each.  That's $180 worth in the oven.  I learned on the first day that you never follow the instructions.  They come wrapped in foil.  We took that off, doused them with butter, seasoned them with Grill Mates mesquite seasoning (??), with a good sprinkle of lemon pepper.  In the oven they go, uncovered.

I should mention this is a convection oven ... one I would love to have at MY house.  Cook for 90 minutes at 350, then cover with foil and back in the oven they go for another hour.  That's when you start testing the temperature.  At 158-159, take those puppies out and let them rest for 20 minutes, still covered.  I swear folks ... it's the best, juiciest turkey I've ever eaten. 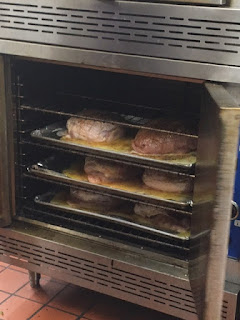 Finally, it's slicing time and the meat is packed in foil pans this time, because the people aren't coming here ... we are taking ALL this food to the Senior Center.  Talk about a logistics nightmare!! 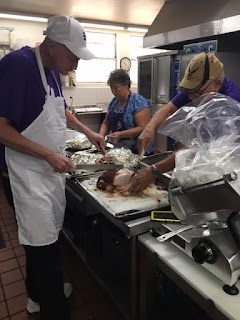 While slicing and dicing is going on, we boiled water for Uncle Bens Cornbread Stuffing mix and Idaho potatoes.  I can deal with the stuffing because there's plenty of seasoning and as you can see, we add a considerable amount of butter.  Everything is better with butter!!  5-1/2 quarts of water and lots of stirring later and we have pretty tasty dressing.  Not as good as homemade, but not bad at all. 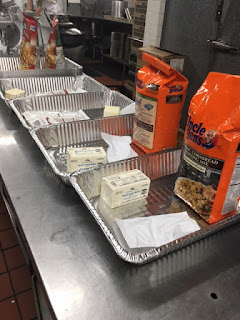 The potatoes on the other hand are not my favorite.  Even if they are grown in Idaho, they taste pretty bad to me.  Here's MY secret ... dump in a packet of powdered Ranch dressing mix.  It's amazing how just that little bit of spice changes the taste, kind of like sour cream.  Be ready for lots of stirring with a strong arm!!

Earlier in the morning I mixed up green beans along with Campbell's cream of mushroom soup and had it baking in the oven.  Topped with French's fried onions, they were exactly like what you cook for dinner.

Gravy is another hard one, especially when it comes from a package.  I made it according to the instructions, then dumped in what little turkey juice there was from those big pans.  Voila!!  Pretty tasty gravy if I do say so myself!!

You can't forget the sweet potatoes!  I drained the cans ... the same kind I buy for Jonathan ... and added lots of brown sugar and maple syrup.  Yummy!!!

Time to pack it up.  Three big pans of turkey, two of green beans, two of stuffing, two of potatoes, one of sweet potatoes, cranberry sauce, rolls, butter, salad with dressing and for dessert ... pumpkin pie with whipped cream ... were all stuffed into the back of a car (seats down of course).  It was a feast to be sure.

Once at the Senior Center, I set up the buffet table with food and we were off to the races.  The Boy Scout Troop from our Lodge not only helped carry plates to the table (there's another huge room on the other side) but delivered many to-go boxes we prepared for those that could not come to the table. 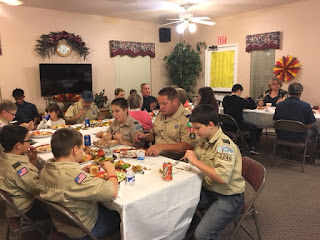 Once all the seniors were fed, the Scouts got to sit down with plates of food for themselves.  Unfortunately we ran out of mashed AND sweet potatoes, but there's not much better than turkey, stuffing and gravy!! 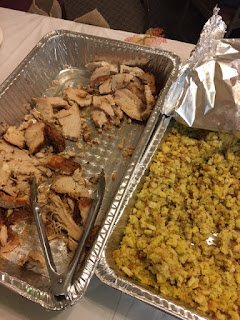 You may think I'm crazy for doing all this, but to be honest, it's MUCH better than sitting home on my butt doing nothing.  Where I live, being single isn't exactly a good thing.  Everyone does everything in pairs.   Being able to get out of the house and be around people is better than being alone, not counting the good feeling you get by helping so many.

There's no more dinners for the next few weeks, but we'll do it all over again at Christmas.  I'm on a mission now ... I have to find one of those Norbest turkeys.  I want to cook one for myself this Christmas!!