Look what magically appeared in my post office box!!!  A new Magic Mouse!!  There's nothing in the world like a good friend that gives you this kind of present.  I'm back in business!

Remember when Nick and Miss Terry were having so much trouble with their Apple computers that they basically threw them out the window?  This appears to be a leftover from that fiasco.  Although I've never had the computer they used (I have a MacBook Pro laptop), I've been perfectly happy with mine.  So when the mouse died, I was devastated.  It's so easy to use, and what can I say, I'm spoiled.

After purchasing the Logitech, I made do until I received a text from Miss Terry, offering up her Apple mouse that she had no use for.  They didn't know it, but I was jumping up and down.  At least something good came from their bad Apple experience.  I LOVE IT!!!  And I love Miss Terry for sending this wonderful gift to me. 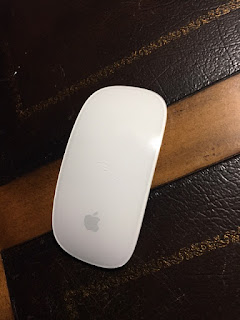 In the meantime, somehow I was transported back to the 70's.  Remember macrame?  I can't tell you how many plant hangers and wall hangings I had back in the day.  Some reached from floor to ceiling.  All ended up in the trash and that fad disappeared pretty quickly.

Well let me tell you, it's making a resurgence.  I spotted a piece in Manzanita Oregon that was over the moon expensive.   I decided to make one myself.  Yesterday, while touring Hobby Lobby, it jumped into my head.  I actually found the cording for $8.  I ordered two more, since I have absolutely no idea how much I'm going to need.  This will be a good test.

Since I didn't remember some of the knots, I checked out You-Tube University and it's all there.  Who knew??  This, believe it or not, is 100 yards.  I need 100 more to finish this particular project.  If it works out, it will hang in a place of honor at Lost Horse Ranch.  Compare $16 to $450.  If not, you'll probably see it hanging in the closet. 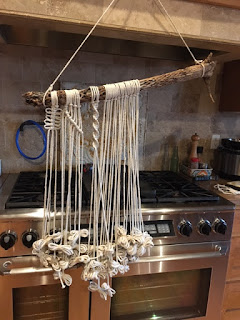 The good news is this project is SO much cheaper than quilting.  I see plant hangars in everyone's future!!  Just kidding, but you'll probably see a few wall hangings in both of my houses.  This is something you could easily do in an RV too!  Come on friends, let's bring back the 70's!!!