I just love it when magic happens ... and yesterday was the day.  I drove North on Hwy 101 to Trinidad to visit the lighthouse.  There used to be a REAL lighthouse here, but now all that remains is a reconstruction to memorialize those lost at sea.  It's a beautiful site overlooking the little harbor. 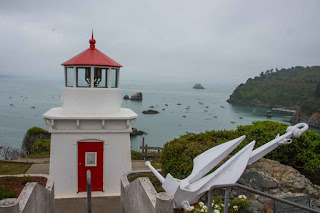 There are many monuments here, with this one probably being the original.  Behind this and to the left is a wall of names of those either lost or buried at sea. 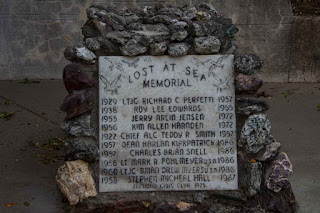 All those little specks are boats in the harbor among a few big rocks.  It was cloudy and overcast most of the day making pictures a little difficult. 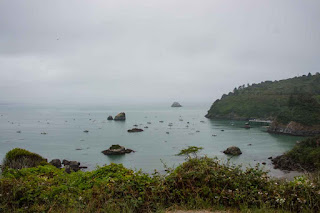 A small trail leads from the lighthouse down to the beach.  Once around the first corner, this is what you see.  If you aren't in good condition and very nimble on your feet, I wouldn't try this.  The lumber steps are worn smooth as glass and covered with slippery sand, not to mention the 45 degree hill.  With no one around, I took my time, even going step by step in a couple of places. 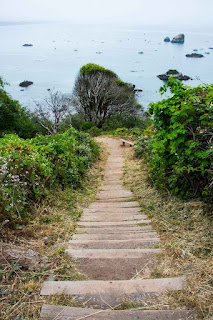 Closer to the water, it was rather dark and foggy, but beautiful.  It's a good thing the tide was out because that last step would have been straight into the water!! 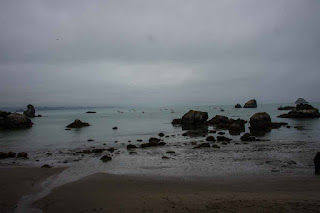 Be careful at the bottom .. at this end round logs barely attached by loose cables, move sideways at every step.  Going back up, I was on hands and knees trying to negotiate the first 15 logs!! 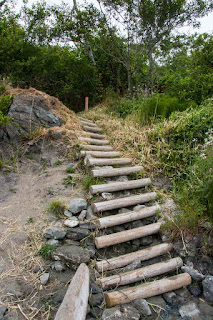 On the way back South, I decided to take the scenic route along the Lost Coast.  This section of Northern California is the least populated due to the rugged coastline and type of soil.  The road isn't for the faint of heart either, and definitely NOT an RV road.  It's extremely narrow in places, even for my Jeep, with patches of dirt and gravel from landslides.  Lots of one lane only sections meant going very slowly around the corners.  Like the stairs however, the views were worth it! 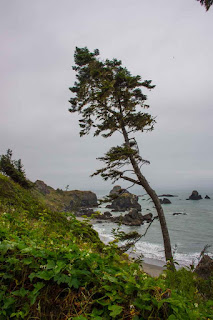 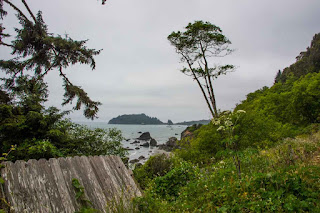 Wildflowers were blooming everywhere.  The big rock on the right is called Houda Point.  Back in the 1880's, redwood shingles were high-lined from the rock (which used to be part of the shoreline) out to waiting ships, then hauled off the Lost Coast to destinations south.  The farthest is Camel Rock, a popular spot for surfers, but none were there on this day. 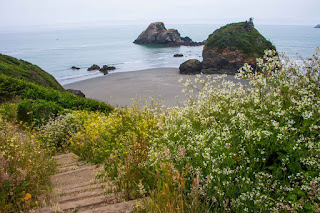 Further down the scenic route, I found a small road leading to Moonstone Beach.  There were no moonstones in sight, but the tide was out and this X marked the spot.  Maybe buried treasure!!!  Really, it's just white rock encased in the black rock making an X but IT'S A SIGN!!! 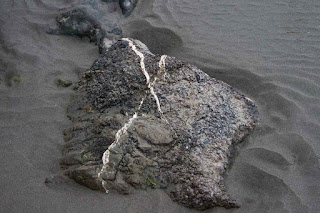 When I got back home, the magic happened!!  There it was .... a brand spanking new Breville Oven on my counter!!  Turns out the X was a sign I needed to put MY X on the dotted line at Bed Bath and Beyond where I found a new beauty for my rig!!!  No more bad cakes and pies ... no more burned toast or half cooked frozen pizza from an tired old toaster oven.  Why, I might even try baking a loaf of bread in this baby!! 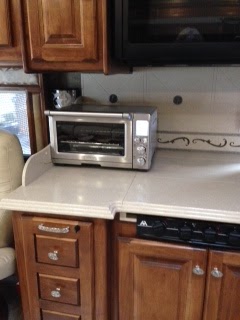 I spent the rest of the afternoon driving up and down the highway looking for a gas station big enough to allow an RV to get fuel.  Seems the only two stations have been taken over by CardLock companies.  Nick Russell stopped by later in the evening to tell me he found one lane next to the Cardlock that allows access to anyone with a credit card.  It's interesting that with as many RV's and RV parks as there are in this area, very few service stations can accommodate big rigs.

One more day in Eureka and I'm off on another adventure!!  I need a day of rest to heal up my sore legs from climbing up and down those stairs!!  UGH!!  I was so proud I didn't get out of breath, but I totally forgot about how my legs would feel the next day.    It's a couch day!!!