I'm an animal lover from way back ... in fact, I wanted to be a Veterinarian when I grew up, but way back in the dark ages, women weren't allowed.  They couldn't take "those" kinds of college classes, they couldn't wear pants to school and it was either Home Ec or Secretarial classes ... take your pick.  So every time I'm anywhere, I search out local zoos to see what wild things they might have.

I wasn't disappointed yesterday when I found the Sequoia Park Zoo right here in Eureka amid the tall redwoods.  These two otters were playing chase while little kids screamed from a tube in the wall where they could get up close and personal.  Okay, I admit it was me in the tube screaming!!  I could watch their antics for hours! 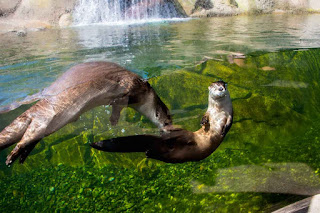 Chilean Flamingos seem to be everywhere.  They adapt well to captivity and don't seem inclined to fly off.  As usual, there were several disagreements going on between the males over who was too close to their girlfriend. 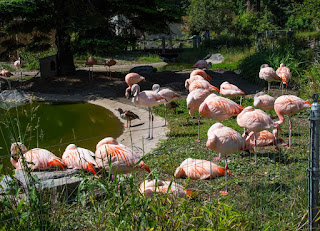 The girlfriends on the other hand just turned their heads and walked away, keeping an eye on their reflection to be sure they were still the prettiest!! 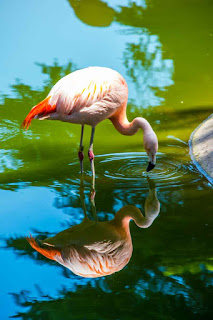 The grandparents just breathed a big sigh and went back to sleep. 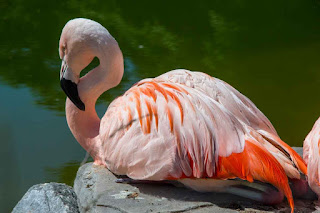 Although very small by San Diego standards, this zoo is amazingly well kept, with nice enclosures for the animals.  There are employees cleaning everywhere, keeping it spotless.

This is Cheyenne whose broken wing didn't heal correctly so she can't fly.  What a shame this magnificent creature was hurt.  Here's the cool part though!!  You can go into her cage, and although there is a low barrier so you don't get too close, there's no wire or netting between you and her, a distance of maybe 20 feet. 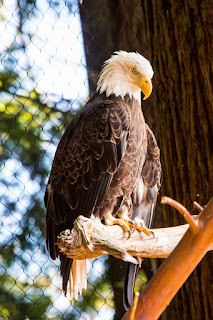 You've heard of screaming eagles??  That's exactly what she did ... threw her head back and let out several screams.  I tried to get some info from the internet on this behavior but could only come up with either calling to other eagles or helping food move down her gullet.  Either way, she's pretty impressive up close and personal!! 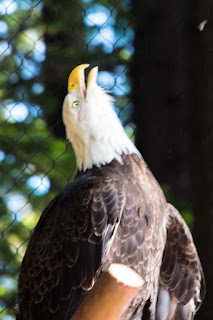 Here's a very well camouflaged little owl.  She's sleeping, as owls do during the day.  Also with a broken wing and unable to fly, she'll spend her life here watching screaming kids go through her territory.  Luckily the kids never did see her!! 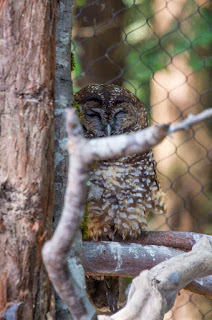 Another screamer .... this Crested Screamer just had babies.  In the morning, she was glued to the nest, but housekeeping duties finally allowed us to see the babies as she cleaned the nest area.  The brave guy on the right almost fell out of the nest before mom saved him with a beak grab!! 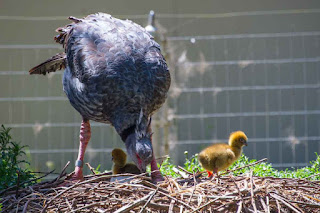 All around the little zoo are tall redwoods that seem to be in great shape.  They're so big that even when I lay on the ground, I can't get them all in the picture!!  At my age, I have to be careful ... people think I must have died, or at the very least, had a heart attack!!  No, no ... I'm fine, really.  Just taking pictures! 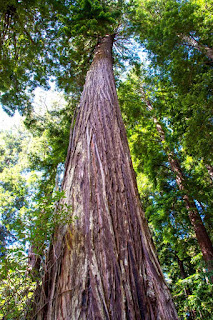 These babies are the stars of the show ... Red Pandas.  The keepers brought bamboo shoots for breakfast, which must be a favorite as this baby licks his lips!! 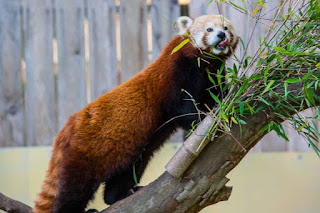 The weather here is perfect for these guys.  They cannot stand temperatures over 70 degrees, so air conditioning units have been placed in all their cages. 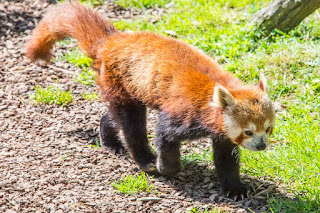 Probably the biggest attraction is The Barnyard.  As you walk around and through the barn, there's lots of creatures big and small.  A real hit with the kids!! 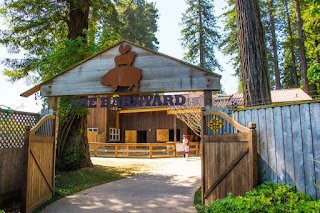 Llamas ... a face only a mother could love, are surrounded by many different kinds of goats.  Everyone was very vocal as they were waiting to be fed. 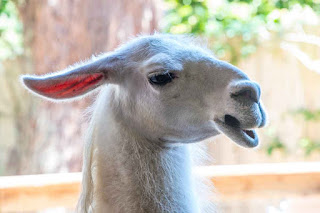 This big guy was a crackup!!  I've never heard of a Kune Kune pig.  It must mean "eats a lot" because his little legs could hardly carry his weight, let along the three inches of fur all over his body!!  As soon as he heard a door close nearby, he started loudly grunting orders for breakfast! 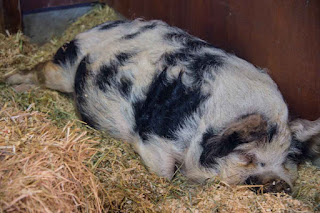 In every barnyard there are usually honey bees buzzing around.  Here they have attached two hives to the outside of the barn, allowing bees to come from all around, doing what they do best ... making honey.  You can lift a cover inside the barn ... away from stinging bees ... and watch them work the hive.  VERY cool!!

Here's a first ... I've never had a barn without mice.  In fact, recently I've heard about several RV friends who have had many mice visitors.  These guys however, have a permanent home inside the walls of the barn, covered with plexiglass so you can watch them do what they do best ... chew things up and make a mess!!  Whoever thought this one up was a genius!!  I watched this little guy for about 30 minutes!! 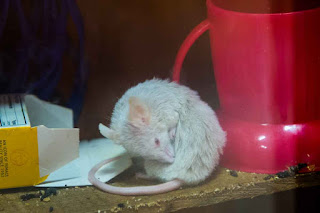 There's lots more animals here to see and beautiful grounds to walk around.  Entry fee is $5.75 for seniors and military and well worth it.  This has to be the cleanest zoo I've ever seen.  It's not a "rush around and see everything" zoo ... it's come take a relaxing walk around the big trees and see what creatures we have.  Feeding goes on all day so you have plenty of opportunities to see them eat and ask questions of the keepers. 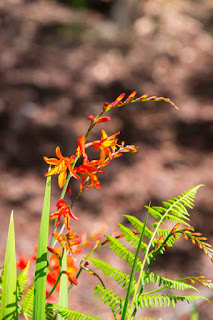 By now it was time for ME to eat, so I went in their little cafe to see what people food they might have.  It's a pretty extensive menu, but with most places like this, I wasn't expecting much, maybe a greasy corn dog or burger.  I ordered a turkey wrap for $7.95.  WOW!!!  This is one of the best turkey wraps I've ever had!!  I thanked the kitchen staff (who were very appreciative) and got a to-go box for the second half, which was last night's dinner. 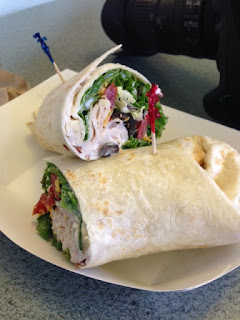 So you just never know how cool a small little zoo can be until you experience it.  Check it out ... and while you're at it, there is Sequoia Garden Park next door, along with Sequoia Park, full of amazing big trees and a path you can walk, oohing and aahing all the way!!