Alone On The Road!!

Some of the time being alone isn't exactly fun ... but yesterday, being alone on the road was GREAT!!  I was up early as usual and took my time buttoning up the rig for the next leg of my trip to Brookings Oregon.  By 8:30 I had fueled up for $3.25 a gallon and pulled out of Eureka. 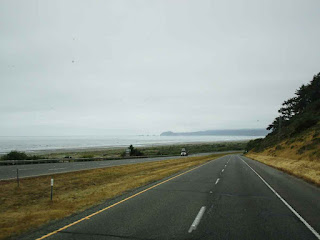 Several sections of the highway have changed over the years from narrow and winding to wide and winding.  In between towns there are freeway sections that make this a much faster trip, and with no one in sight on the road, I just cruised at my own pace.  There are many 30-35mph corners that really require your attention.  The road's camber is sometimes going the wrong direction, so SLOW was the word of the day. 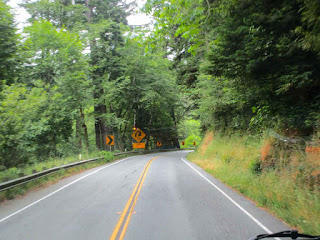 I passed the Trees of Mystery with Babe the not-so-blue ox and Paul Bunyon with his huge ax.  No one ever wanted to stop and check it out, but I have it on good authority that the trees there are really interesting, making it a must see. 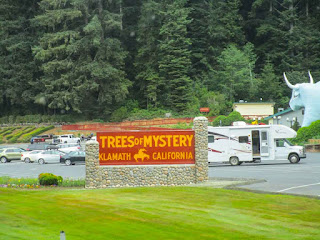 Fog covered the in-between sections ... it was clear near the ocean and sunny on the mountain tops ... but that didn't slow me down much at all.  At this point, I began to think maybe there had been some natural disaster that I missed on the morning news.  I did see one homeless guy shaking out his blanket on the roadside, but literally NO cars or trucks!!  Maybe I'm the only one left on earth!!  Just me and the homeless guy!! 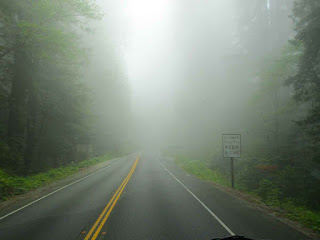 When I got to the Oregon border, I breathed a big sigh of relief when I saw a couple of vehicles parked by the California Border Station ... which was closed.  Apparently aliens haven't landed, there were no ice tornados and no earthquakes splitting the U.S. in half!!  I probably watch the SyFy channel too much!!! 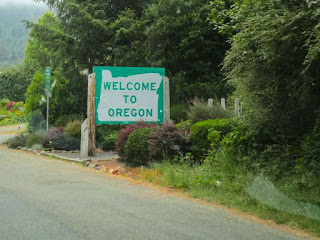 Arriving at the Brookings Elks Lodge, in a record 2 hr 15 min (honestly, I didn't speed) the perfect pull-through space was just waiting for me to drive right in.  It's near the dump station, but far from everyone else ... perfect for my sometimes barky puppies!!  One of the reasons I wanted to stop here was to meet and visit with friends of a friend .. Cindy and Tim Young.  First however, I did a quick drive by of Harris Beach State Park, a great place to stay in your RV with lots of large sites. 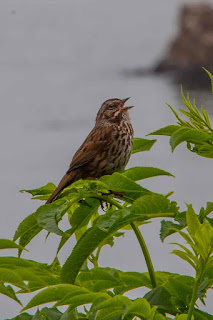 It was a good year for daisies ... they were everywhere along the coast!!  Wouldn't you like to look at this every day??? 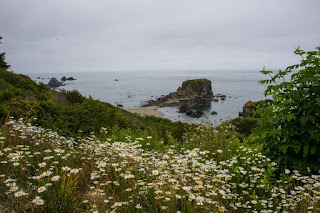 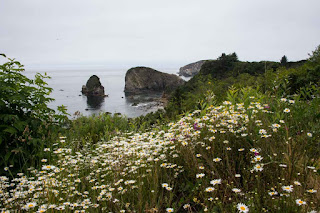 I met up with Cindy and Tim at their house, whereupon we promptly planned a hike into the redwood trees along the Chetco River.  I don't know if it was one mile or three miles, but there was some good uphill climbs that had my legs turning to jelly.  I know, hard to believe since I run a lot, right??  Trouble is, I run on FLAT ground!!!

Cindy immediately found this guy crawling across the trail ... some variety of banana snail I suppose. Yuck!!!  He was moving though ... trying to get to the greener pasture as fast as he could. 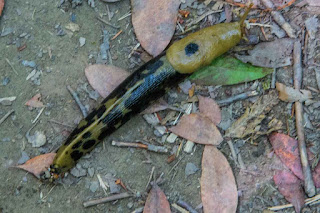 The trees are amazing around here.  These huge monsters are just teenagers in the tree world.  This one was apparently in a fire at one time, but that didn't keep it from growing!  The entire middle of the tree is gone ... just the outside shell is left, yet it continues to reach for the sky. 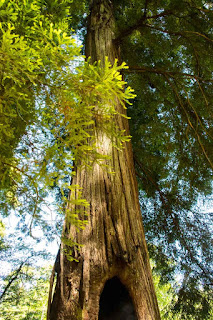 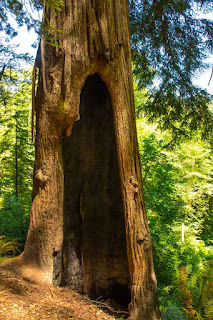 Back at their house, Cindy and Tim cooked an amazing gourmet dinner of pork chops, potatoes, squash and salad, along with key lime pie for dessert.  I was in HEAVEN!!  What I wouldn't give to cook a meal like THAT!!!  By the way, Cindy is a quilter extraordinaire, having shown in the Sisters Oregon biggest quilt show ever!!!  I didn't get any pictures, but they were amazing!!!  It definitely motivates me to try new things!!

By 9:00 we were all sacked out on the couch with full bellies ready for bed. 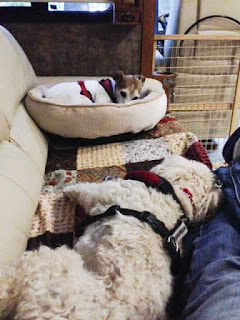 Surprisingly, I'm NOT sore this morning, but I can sure tell I had a great workout yesterday.  Maybe a little walk to the local quilt store will make my legs feel better!!!

I almost forgot ... this is Annie!!  A Ragdoll kitty ... like a Siamese with beautiful blue eyes and spectacular colors!! 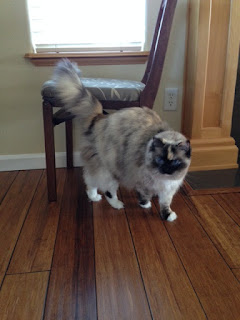 Annie is a princess that lives in a castle!!!  How cool is THAT???? 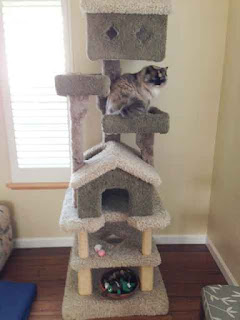