There's not much I'm jealous of at my age ... a really good cutting horse, a Victorian house I can't have and an amazing garden, since I have a black thumb!!  Yesterday, I saw the garden I've always wanted!!

I ran early in the morning, making the walk around Fort Humboldt perfect for my sore legs!! 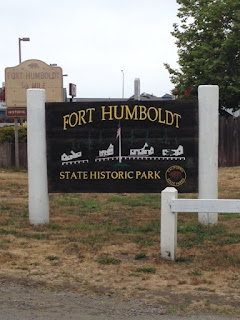 Nothing loosens you up like a mile long walk.  I went straight for the Visitor's Center and was disappointed to find it closed. 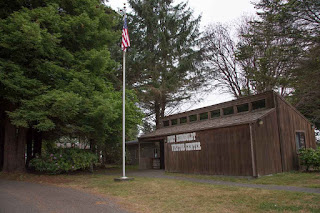 To the west of the building is an outdoor logging museum, full of old equipment, including this Bear Harbor #1 engine that hauled lots of logs and lumbermen into the redwood forests.  Enclosed in very reflective glass, you couldn't see much!! 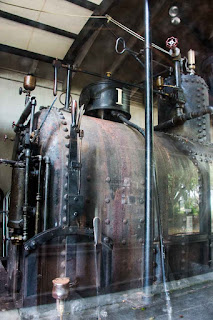 There were several varieties of steam donkeys, including his one invented by a local, Mr. Dolbeer, in 1881.  This saved the lives of many lumbermen who were previously moving those skyscraper logs by hand or with mules.  They became so efficient, that only 4% of old growth timber remains to this day. 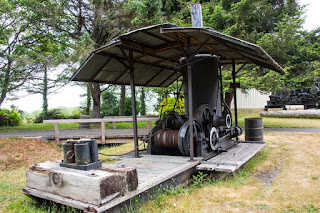 There were a few women around camp, but only married women were allowed to work the kitchens. The lumber baron didn't want any hanky panky going on with his lumber crew that might slow down their work! 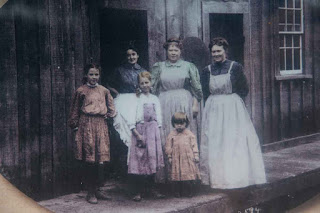 There was a lingo that went along with the men ... they were Timberbeasts (not lumber jacks) who wore tin pants (waterproof due to the swampy nature on the coast) who respected the Zooglers (animal wranglers) and Saw Filers who keep the misery whips (saws) sharp.  They also LOVED flybread ... raisin bread to you and me, because the raisins looked like flies. 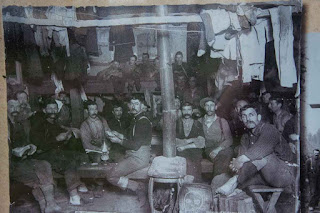 Once through the lumber museum, I headed out across the Fort Humboldt grounds, imaging the hundreds of mules and men as they loaded up supplies brought in by ships and took off for places further north to deliver their wares. 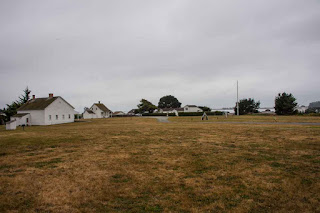 The large building above on the left above, was the Hospital.  Mostly men died from apoplexy (stroke), consumption (tuberculosis) and drowning.  I wonder if they thought this was a good life, or if they hated every minute??

Built in 1853, this Fort wasn't built for the long haul ... it was strictly to help mediate the Indian-Immigrant wars.  Unfortunately for the natives, when the Federal Troops left for the Civil War, the State took over, resulting in the deaths and resettlement of most, if not all of the Indians.  Many of those injured were treated at this hospital, which has several exhibits inside that you can wander through. 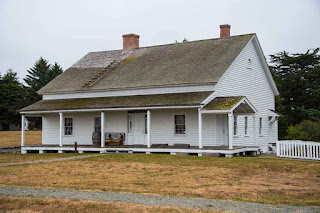 Every good hospital had a backyard garden for herbs, since medicines were not readily available.  Just walk out back and pick some johnny-jump-ups to cure your ills. 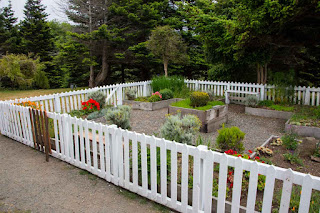 On the West side of the Fort, you can look down on what used to be the local native village.  It now houses that all important shopping mall!!  The local natives were gathered up and placed in a "corral", a circular 80' structure with ten foot tall walls to keep them in one place before displacing them to reservations.  Most died in the corral. 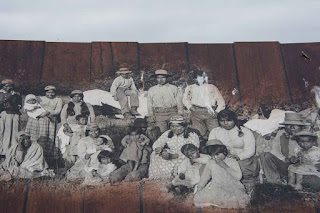 Totally depressed over the fate of the natives here, my stomach finally took over by reminding me it was way past lunch!!  In my last blog I noted there was nothing going on in Loleta ... well come to find out, there is a GREAT place to visit in this little town.  Loleta Cheese Company. 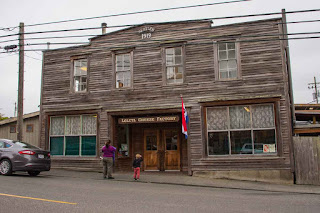 The big stainless steel vat is where the cheese is made, then moved to the boxes on the left and squished to remove excess water.  The cheese crew only works two days a week, getting all their milk from one local dairy. 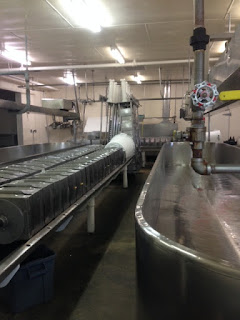 They make many different kinds of cheese here, all of which is displayed in his long counter, full of sample bowls.  I tried every single one, and I have to say there were only three I didn't care for, as evidenced by the nine bricks I left with!!  The good news is that it will last for at least three months in the fridge.  The friendly staff said you can freeze it, but once defrosted, it tends to become crumbly. 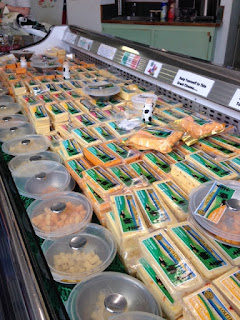 It was then that the green jealous monster raised his head and tapped me on the shoulder.  Out back, the Loleta Cheese Company has the most amazing garden, all in full bloom!! 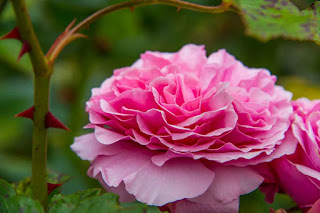 Forgive me, I know not the names ... and probably wouldn't be able to remember them even if someone told me.  All I know is they were GORGEOUS!! 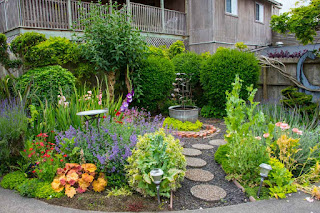 There were many varieties of poppies and the bees liked them as much as I did.  It seems there is a retired gentleman that comes every Friday to tend the garden ... a labor of love, I'm sure!! 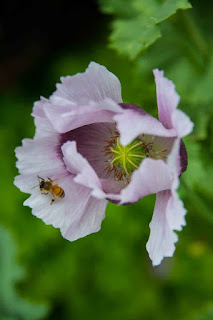 Look at this one!!!  It's spiky and fuzzy and purple and beautiful!!! 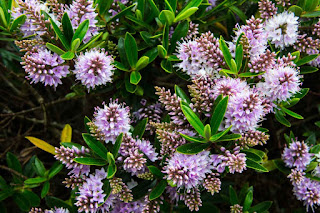 These are the two most spectacular white plastic chairs, just because they are placed next to this potted bush. 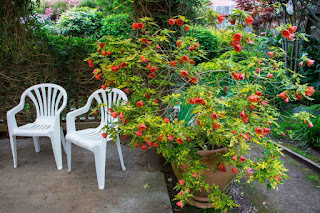 Everywhere you look there is beauty, from daffodils to poppies to lavender and ground cover. 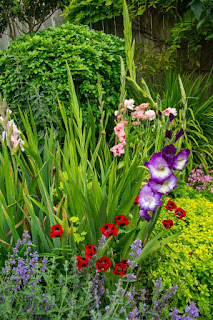 I saved the best for last.  If anyone knows what this is, please let me know so I can plant some in my garden.  This looks likes a Victorian dress you would see at an afternoon tea in Mr. Carson's mansion!! 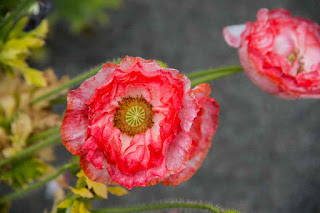 This image doesn't fit, I know, but if you've ever ridden with a photographer, you know they stop at the oddest places to take pictures.  I couldn't resist the glass blocks and rusty red paint. 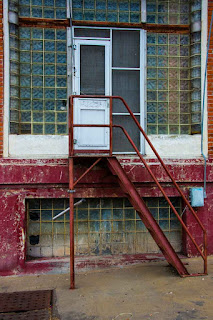 I made another quick stop on the way back home at Fields Landing boat dock.  You'd never know it was there unless on a whim, you took an offramp just to see where it went!!  It's all about the adventure! 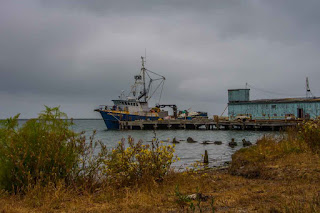 My last stop was at the College of The Redwoods Botanical Gardens that turned out to be a truck driving school!!   While watching a poor kid learn how to back up, these babies cruised by my car.  They were so still, I initially thought they were statues ... until this one got an itch!! 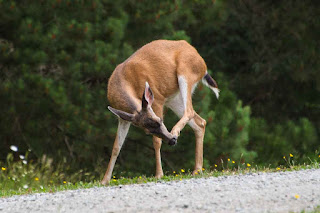 This little buck followed two does right past my car, giving me lots of opportunity for pictures. 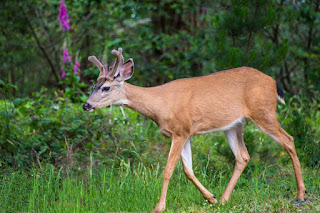 It was a long day, but I wasn't going to pass up dinner with friends Nick and Terry Russell at the Samoa Cookhouse.  This place has been in business since the late 1800's, serving timberbeasts, zooglers and tourists ever since. 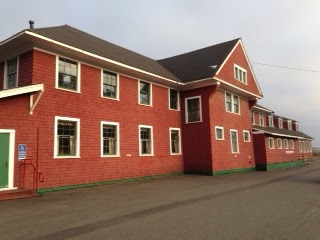 It's a set menu every day, posted on Facebook if you want to know what's for dinner and everything is served family style, all you can eat, for $16.  We had the best homemade bread (from the original 1800's recipe), beef barley vegetable soup, salad, red potatoes, corn, sweet ham and yummy fried chicken, followed up with pineapple cake and the best buttercream frosting I've had in a long time!!  Good food and great friends ... what could be better?? 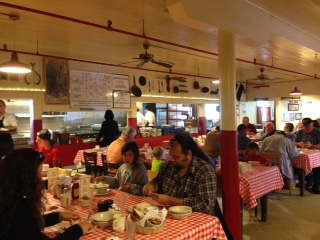 Back at the rigs, I was invited to check out Miss Terry's weaving projects.  Man oh man ... this lady is talented!!  I don't know if you've ever seen a loom before, but it's crazy complicated and results in the most amazing intricate patterns you've ever seen.  Maybe Nick will do an entire story on the weaving process, because it's fascinating ... and something you never really think about when you buy something as simple as a washcloth!!