Happy Father's Day to all the dads in the country!!  I hope you have a great day and maybe a nice barbecued STEAK!!!

It's been the usual foggy mornings here in Oregon.  Several of the locals were complaining, but I just love the cool weather.  I can run comfortably and not become a flaming fireplace of heat when I stop!!  The harbor was very busy yesterday with fishing boats lined up by the dozens trying to get back to the dock.  Unfortunately, I didn't see any catch!! 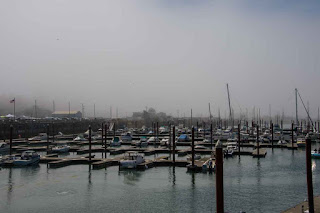 It was then I spotted the white tents ... which always mean there's cool things to buy!!!  The usual jewelry and crocheted items didn't catch my eye, but the sign that said "buy one ring, get four free" was tempting, to say the least!!  Now THAT'S a bargain!! 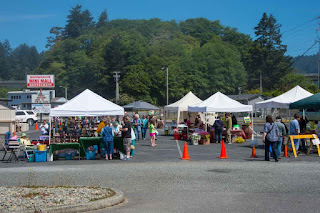 There was only one table with vegetables and fruit on it, but they were spectacular ones.  Juicy red tomatoes and plums that apparently had a pomegranate tree in the woodshed.  I didn't try the nectarines, but the plums were delicious!! 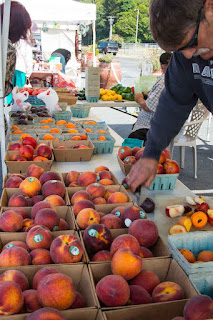 Baskets full of blueberries and cherries covered the end of the table, but I passed on those.  I don't want to get TOO healthy!!! 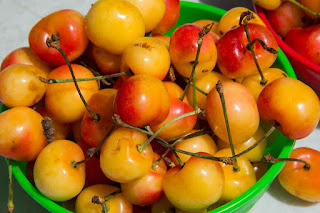 I dropped my purchases off at the car and went in search of the ice cream store, when I spotted even MORE white tents at the back of the buildings across the street.  On this side there was great music, beautiful jewelry, more crocheted items and food vendors.  I passed on the food and went straight for this necklace.   It's much more spectacular in person and handmade by a local artist.  It will go great with my cowboy boots, don't you think?? 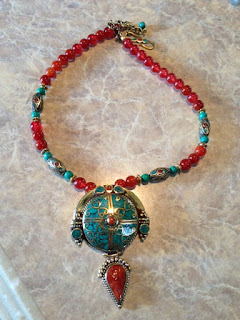 I have it on good authority that Slugs 'N Stones ice cream store is much better than it sounds.  I didn't stop in on this trip however ... the sun finally came out and my car was getting too hot for the fruit I purchased. 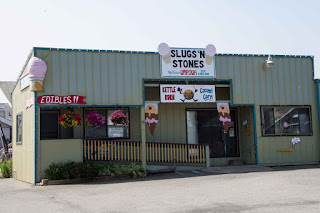 I took a back road home ... always looking for adventure on the back streets of every little town, but mostly to miss the traffic ... when I found this little philosophical gem!!  I have to say I AGREE!! 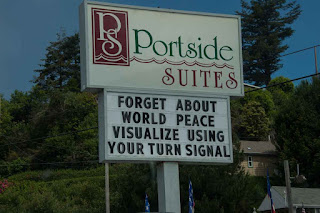 Back at the rig, I spent the afternoon with Nick and Terry Russell learning all I could about weaving looms.  Terry is a self-taught genius when it comes to this stuff and I wanted to learn all I could to see if it's something I might want to try ... not to the extent she does, but with a small table top model.  There's a LOT to learn about this craft!!  Loaded up with magazines and DVD's, I spent the afternoon learning the lingo ... heddles, warps, boat shuttles ... until it was time for dinner.

I'll eat anything, so Terry and I left it up to Nick to pick a place where we could partake ... O'Hollerans Steakhouse and Lounge, right on Hwy 101, seemed to fit the bill.  You can't miss it if you eat around 6:00 pm ... it will be the place with no parking spaces available!!  Definitely go early to this gem!!  We found out why it's so popular ... the food was delicious.  Nick and I both had steak and prawns while Terry had salmon cakes.  YUM YUM!!! 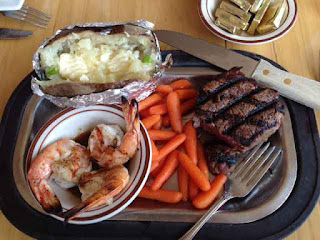 I watched another DVD before crashing on the couch.  These 4:30 am mornings from puppy kisses are killing me!!!  Nick and Terry are taking off to greener pastures further North, while I stay one more day.  This might just be a good day for napping!!!