It's been graduation time around central California, which means lots of crazed kids driving adults even crazier!!  Between their not-so-good driving skills and exceptional sneak-out-at-night skills, it's amazing they made it to San Francisco State like my friend's grandson. 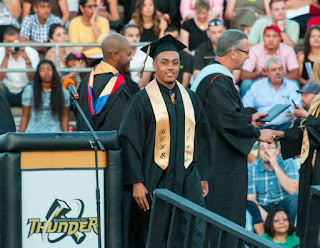 Graduations sure aren't what they used to be.  First off, you can't get in without a ticket and the chairs are the smallest most uncomfortable possible.  The speeches were way too long and boring, beginning with the first teacher to take the stand, and no one told the audience to have a little respect and be quiet so we could hear.  By the time they walked up on the stage to get that piece of paper, it was dark.  There were no pictures taken of the graduates receiving their diplomas ... apparently they chose a "live stream" instead.  I hope those parents have a photographic memory!!

The planned party afterwards was a bust ... with only two pizza parlors in town, they had a little trouble serving hundreds of pizzas and everyone else folded up the sidewalks before the ceremonies were over.  The good news is over 1000 kids actually graduated!!

I don't know what happened to the last month, but it has gone by in a flash.  I'm frantically trying to get things fixed before departure day.  All of a sudden I have big brown spots in my lawn where the sprinklers aren't working, light bulbs that are burned out, ranch paperwork that needs to be signed and I had to make a trip to the local Environmental Health Department for septic and well information.  You can probably guess how that went!!

First they told me I had to fill out a request that they would review before giving it to County Counsel  for approval.  Are you kidding me??  To get a copy of the septic system on my property, County Counsel has to approve??  I don't think so .... maybe I should speak with your supervisor!!  Someone has definitely given her some bad information.  I worked in and around that Department for 22 years so I KNOW she is misinformed.

I went to their office and in ten minutes had a copy of everything in the file from soup to nuts.  That came to 4 pieces of paper ... we purchased it in 1954 when there were no regulations on the books.  Remember those wonderful times??  Now you can't even build a dog house without a permit!!

I still haven't washed the rig, set up the housekeeper or packed my clothes.  Hopefully I'll get something done today.  The oven of the central valley is heating up pretty quickly now, with three digit temperatures expected most of the week.  Time to head to high country!!