Having run a few more miles on Saturday along with a few miles walking the zoo, I decided to be a couch potato on Sunday.  Unfortunately, that didn't work out so well since I can't stand to sit still.  How about recreating those strawberry pies?  Think these will pass? 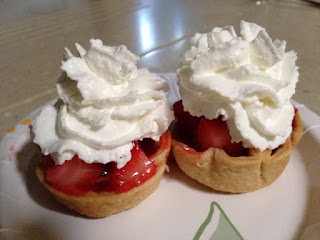 A little pre-made pie dough cut with a biscuit cutter and baked in muffin tins was the first step.  I rolled out the leftover dough, covered it with sugar and cinnamon and baked it like my mom used to when I was a kid.  The black rod is a core sample of marble from a quarry I stopped at last summer.  It makes a perfect rolling pin!!  Thanks to Tom Westerfield for spying it in a corner of the shop!! 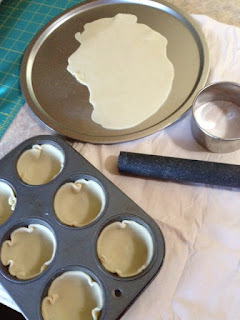 I found a quick and tasty recipe for the filling using fresh strawberries, jello, sugar and water.  Guess I should have made the shells a little bigger.  One large tablespoon of juice overflowed nicely all over the counter.  I popped them into the fridge to set before topping them with tons of whipped cream.  YUM YUM!!!  Take two ... they're small and not high in calories!!  I think you can even buy pre-made shells for your next RV rally potluck!! 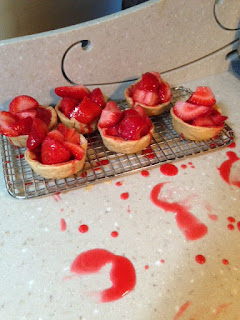 Gee ... if I can do that, maybe I can bake that six inch strawberry cake.  A quick search of town resulted in a local Michaels store, full of Wilton cake supplies and baking goods.  I did wonder how it was going to work in my convection oven, but nothing ventured, nothing gained.  There MUST be a way to bake a good cake in this type of oven.  Yesterday however, wasn't going to be the day!!

All the convection recipe books I have call for Low Bake, 350 degrees, 25 minutes.  The recipe said this cake needed one hour.  That was pretty hard to translate.  As you can see, it translated to an overdone cake.  I cut it into three layers and filled it with sliced strawberries.  There isn't much that frosting can't cover up or make taste yummy, right?? 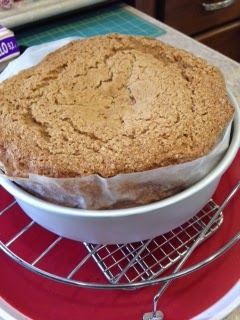 I'm here to tell you that's not true after all!!  After frosting with a mixture of cream cheese, butter and white chocolate and WAY too much red food coloring, I took a taste.  DARN!!!  That frosting recipe was horrible!!  Another candidate for my ever increasing cemetery.

The good news is that Nick and Terry Russell pulled in to the Elks Lodge here yesterday afternoon and I was able to discuss Convection Cake Baking 101 with the best RV Cook around.  Course she uses her Breville Oven, which I left home, but I'm determined to try her calculations and make a decent microwave/convection oven cake, just to prove that once in a blue moon I really CAN cook!!

One last thing before I hit the parking lot running again, I would like to note that Nick's reputation for rain following him around the U.S. is in fact, TRUE!!  I checked my weather app this morning and YES, it's supposed to sprinkle on and off for the next two days.  Maybe we can talk him into hanging around California for the next couple of months!!

Posted by Nancy Kissack at 6:26 AM