My little town was set for another hot day yesterday as I loaded up the remaining necessities in the rig in 76 degree temperatures, the coolest of the night!!  Once on the road, the wind came up just enough to make the truckers and I slow down to a little under 55.  By the time I got to Cal Expo in Sacramento, it was 95 degrees and blowing like my convection oven!!

I'm definitely Nervous Nellie when it comes to taking off on my own to places I haven't been before.  The adrenaline was still rushing as I pulled in to Cal Expo and came to a screeching halt.  Wrong
entrance!!

Mr. Old-Man-Grump at the gate wouldn't open the side gate so I could go in and turn around easily.  Instead, I had to skinny through the car gate and try to immediately make a U-turn.  Obviously he doesn't know the "no-back-up" rule!!   I'm sure I had all of 1" to spare, even though I turned the wheel as tight as possible!!  Thank goodness the RV Park people are nicer, including the Manager Miss Kitty who was snoozing on the counter.

Surprise!!!  This isn't my rig, but it IS a Phaeton from Texas parked right next to me in a mostly empty park!! 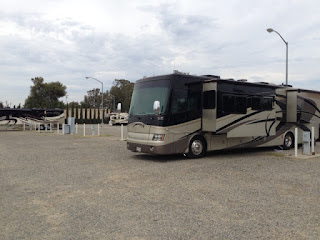 I decided to at least get two hours driving behind me, leaving probably a long 7 hour drive today til I arrive in Eureka, my first jumping off spot!! 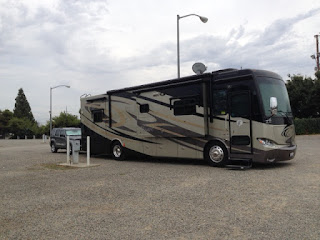 I spent a couple of hours on the computer looking at maps of my destinations while both air conditioners were running.  The puppies finally cooled down before taking a quick walk outside to come face to face with two huge Huskys!!   I picked Jessie up just in time to keep her from being lunch!!

Believe it or not, it rained most of the night.  At least there's SOME water coming down in California ... in JUNE??   It's a muggy but cool 66 degrees.  I'm off early this morning ... see you in Eureka!!

Posted by Nancy Kissack at 6:07 AM