I Made It To Florence Oregon!!!

It was easy peasy to hook up the car and take off from Bandon, so I took my time.  Once on the road, you begin to cross bridges over rivers and lakes full of water.  A nice sight to see if you are from California!! 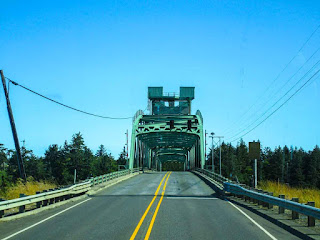 Traffic was definitely heavier and I had to keep my eyes on the road, so there's not so many pictures.  I got stuck behind a truck pulling a fifth wheel VERY slowly ... until I began to pass, then he sped up just enough that I couldn't get by.  Not sure what that was all about!!! 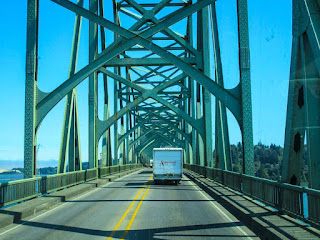 As I came through Coos Bay, I took a double take at the Mills Casino parking lot.  FMCA is having a rally there and they are sold out.  SO sold out that there isn't even enough space in the gravel parking lot to park a volkswagon!!  No wonder I couldn't get a reservation!! 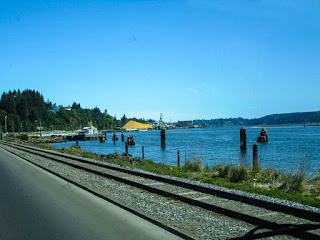 No problem however ...  until I continued on to Florence where I took a wrong turn.  Then my lovely GPS sent me straight into a senior facility with closed gates!!!  My worst nightmare has come to pass!!!  Thankfully before I had to unhook the car, a couple of nice gray haired ladies drove up to open the gate for me so I could turn around in the parking lot.  That was trick driving if there ever was any ... as I barely slid between the bushes, the curbs, the steel posts and the cars.  WHEW!!!

Florence is located at the mouth of the Suislaw River and used to be known for logging and commercial fishing.  That has given way to tourism, as it has now become the destination of retirees.  Over one third of the population are retirees who have moved here, keeping the economy going. 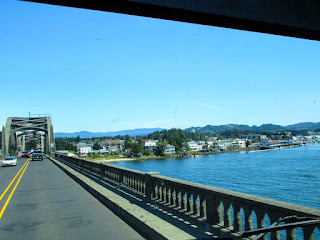 At last I made it to the Elks Park and I have a nice spot with no neighbors ... yet anyway!!  The bad news is that the phone service is non-existent.  I can use the Elks internet, so at least the blog won't suffer and I can get email.  My phone is another story.  It takes a three mile drive to town to get it to work. 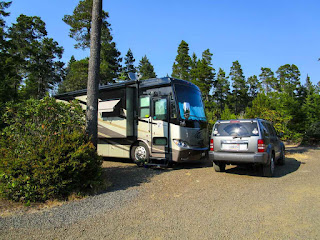 It's funny how disconnected I feel with no phone ... but I'll survive for three days before I head to Harrisburg for rig repairs.  I hear it's been 98-100 degrees over there every day and no open spots at the inn (everyone I called is full).  Guess I better stick my clothes in the freezer before I go on THAT trip so I don't melt!!!

Today I was actually going to drive back to Coos Bay to see friends at the rally, but once unhooked, my car's right front wheel seems to be making a noise I'm not at all happy about.  It's a scraping sound every time the wheel gets to a certain point.  Then it quits .... then it starts up again.  I can only hear it when going very slow, and it's making me nervous enough to cancel the trip.  I'm taking it to Les Schwab's today to see what they might find.