When I landed in Florence Oregon, my car was making a scraping noise ... like maybe brakes?  Of course it didn't do it ALL the time, but early yesterday morning, I was at the doorstep of Les Schwab, as recommended by the Host at the Elks Park.  After driving the Jeep, the mechanic jacked it up and took two tires off.  Twenty minutes later he came in and said he adjusted the emergency brake, the sound had stopped and it was ready to go. 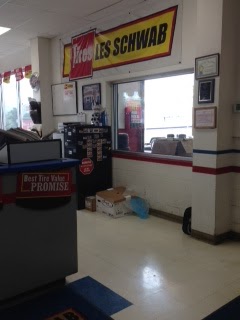 This is Dutch who lives at the Yarn Shop ... the most beautiful, soft, loving collie I've ever petted.  Once recovered from the shock of "no charge", I took off for Coos Bay where friends Cyndae and Joe were enjoying the FMCA rally. 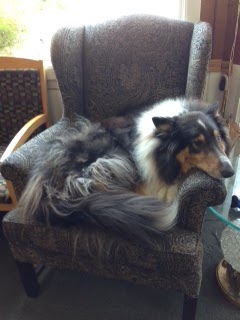 Cyndae and I checked out a quilt store as I sang Les Schwab's praises to anyone that would listen, then walked across the street to one of the best yarn stores I've seen.  My Yarn Store has every kind of yarn imaginable, wall to wall.  By now we're starving, so two doors down we found Shark Bites.  Not the fanciest place I've been in ... in fact, I almost turned around and walked back out ... but the service was excellent and we were immediately seated.

Best fish tacos EVER!!!  The Southwestern Taco Plate was amazing!!  Even better, my car wasn't making that awful noise any more as I headed back home, fighting traffic all the way.  To the guy that kept turning his windshield washers on (which soaked my car) every time I got a little too close because he was driving 10-15 miles under the speed limit ... thank you!!  My windshield was sparkling clean by the time you turned off!!! 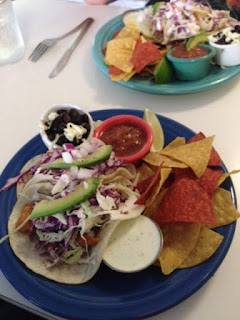 When you turn on the road to the Elks Park North of Florence, Darlingtonia Wayside is immediately on the right ... which pretty much looks like a turnout with a couple of picnic tables.  Little did I know, until friend Nick Russell called to check on my car situation (more praises for Les Schwab) and suggested I stop in.

If you have time, spend a few minutes at this weird roadside botanical preserve.  There's some really awesome plants here called Darlingtonia Californica. 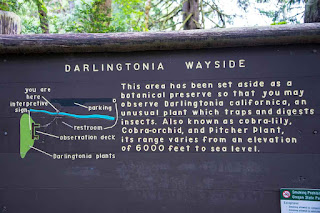 Walk back in time down the garden path through the shade trees ...... 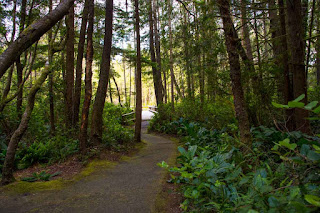 to the wooden walkway where you will find these amazing meat-eating plants. 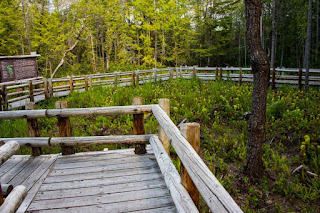 Called the cobra plant, flies and insects go in the tube from underneath, get disoriented and crawl down the throat, where they find little hairs that keep them from getting out ... and eventually hit the bottom where they are digested.  YUCK!!!  But how cool is that??? 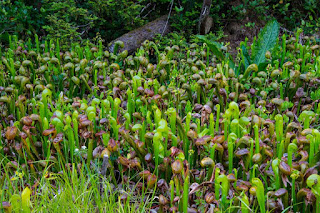 There is a large bog here, chock full of these amazing green cobra plants.  It looks like something from the dinosaur age, along with many plant varieties that look prehistoric!!  It's a very interesting spot to stop ... maybe bring your lunch!!! 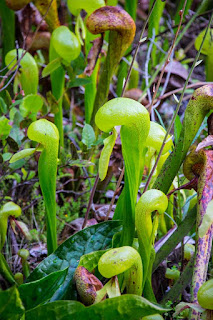 Finally back home, I breathed a huge sigh of relief about my Jeep and thought about how nice it was of Nick and Terry to check on me and my car problem!!  Here I am several hundred miles from home and there are people here and on my blog who look out for me.  I can't say thank you enough!!!!

With a couple hours of rest under my belt, I headed back out to Chen's Family Dish to meet Miss Terry and Nick for some chinese food.  It was DE - licious!!  I had shrimp fried rice and brought enough home for three more meals.  They don't skimp on the portions!!

Today I'll head off to the beach to see what treasures I can find ... in my car that Les Schwab fixed FOR FREE!!!!  Imagine that!!

Posted by Nancy Kissack at 6:16 AM