I actually had several more descriptive titles for this blog, but decided I should be nice!!!  I KNOW none of my friendly blog readers would EVER DO THIS!!!

Don't get me wrong, I'm certainly NO expert at backing up, even after backing into sites all across the U.S. last summer.  I know very well what saved me was expert Barbara Westerfield, who spotted me every single time.

This gentleman however, needs a knock up side the head and a lesson at RV Driving School!!  The salmon colored RV came in towing a car on a dolly, not the easiest to deal with, I'm sure.  Once the car was off and it was disconnected from the rig, whose diesel engine ran the entire time, they moved it four different places by hand until finally deciding on a spot clear down by the lodge.

The wife then moved the car down by the lodge, which brought husband out, arms waving.  She appeared to put her fingers in her ears and walk away!!

Twenty minutes later, after two false starts, everyone else jumped into action and moved their vehicles out of the way.  Smart move!!  Two more tries, with his lovely wife trying to give him directions, he hit the brakes, turned off the engine and came out of the rig screaming like his pants were on fire.

I realize he must have been frustrated, but that's no reason whatsoever to be yelling at your wife, waving your arms wildly in the air and storming around like a tornado!!  That brought a couple of men out of their rigs to try and help ... I just sat on my steps and watched.  I know when to keep my nose out of someone else's business!! 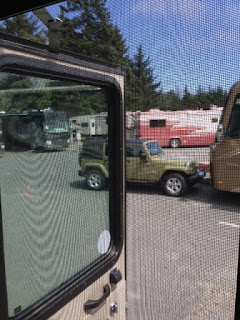 Thirty minutes later, with help from three men, he was finally able to get in the site, but heaven forbid he should turn the engine off.  Apparently he has no jacks and no air bags.  They put several blocks under the wheels and pulled forward, slamming on the brakes and I'm sure, throwing everything inside on the floor!!  Trouble was, they put the blocks in the front ... where it was already too high.  Engine still running, they moved the blocks to the back and tried again.  EUREKA!!!

Fifteen minutes more and they turned the engine off!!  The wife high-fived the gentlemen helping her.

Just in case she MIGHT read my blog, I think she's a saint!!  I'd love to take her aside and give out Barbara's surefire tips to get a rig in your spot on the first try, but I doubt that will happen.  I can only send over a little prayer that the next time goes a little better.  Guys, please don't yell at your wives ... it only makes YOU look like a jerk!!  My guess is that he's also angry about what terrible fuel mileage his rig gets.  Gee ...... I wonder why???

Just goes to prove you can have an exciting day just sitting in your rig watching the world go by!!

Posted by Nancy Kissack at 6:19 AM