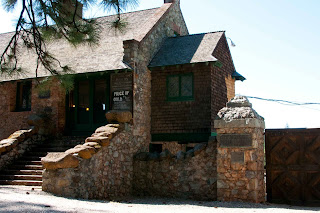 The mine entrance is rather small.  We were allowed in about 25 feet where this man-truck was waiting for miners to jump in for the fast ride to the bottom.  I thought this one was at a sharp angle ...... 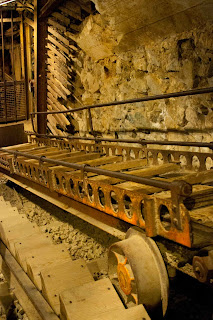 Another loaded man-truck going almost straight down the shaft.  What an "E" ticket ride that must have been.  These guys are practically sitting on each others shoulders!!! 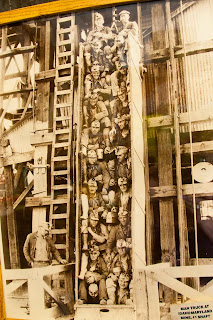 Here is the actual mine shaft.  At the bottom of the mines mules were used to pull the ore cars to a central location, where they were dumped into larger cars and pulled out this hole. 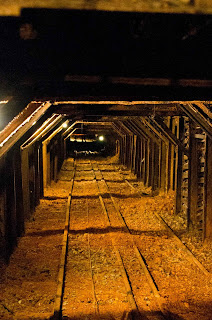 Once the ore was out of the mine shaft, it was crushed by stamp mills, run by pelton wheels, powered by water.  The second museum we visited had a smaller working version of this 30 foot tall original, the biggest in the world. 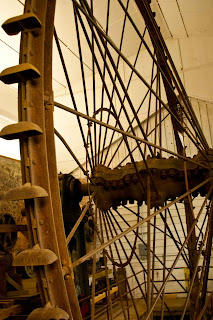 Stamp mills ran 24 hours a day, 364 days a year.  Must have been hard to sleep around here because the noise from just one was deafening!!  The ore mixed with water went in the back and came out the front crushed sand, which was then run over tables of mercury in order to extract the gold.  That amalgam was further processed to the final product, almost pure gold. 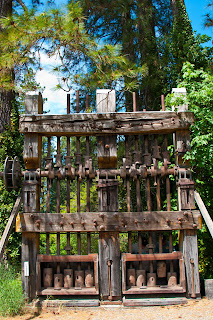 All of this gold went into the pocket of Mr. Bourn who built this beautiful vacation "cottage" of 4600 sq ft and surrounded it with heirloom roses and beautiful landscaping. 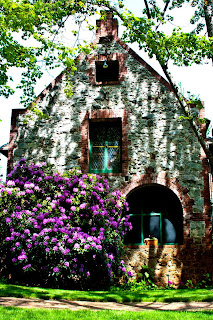 Not being known to socialize with the lowly miners, they built a large recreation building for special guests.  It housed a billiard room,  bar, small ballroom and a bowling alley surrounded by tennis courts in order to entertain "officials".  They limited it to 100 people and called it the Empire Club, which still exists to this day. 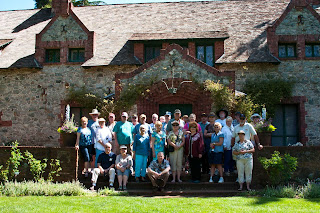 This beautiful mansion with most of the original furnishings intact, is a window into the past lives of the rich and famous.

After a great picnic of Cornish Pasties (pronounced Past-ees), similar to what the local miners ate every day, we stopped by a second museum with many interesting pieces of equipment, including a refurbished dynamite stuffing machine.  Now THAT must have been an exciting job!!