I think our main focus was to find a bank in Sand Point to get Canadian money so we wouldn't get conversion charges on our credit cards.  We ended up doing much more!!

First stop was Albeni Falls.  The emigrant that homesteaded here was named Albeni Poirie, but no one could pronounce his last name, so they used his first -- Albeni!! (Albany)  It's funny when Dan and I take the exact same image.  I'll try to be more "original" ...... 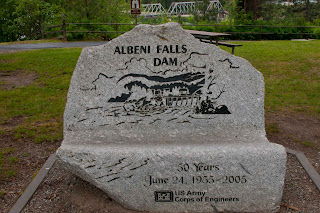 There were actually two small falls here, but the dam did away with them.  Built and operated by the Corps of Engineers for electricity and flood prevention, it has created a beautiful lake for the locals.  By the way, if any of my historical data conflicts with Dan's ... HIS is correct.  He has a much better memory than I do!! 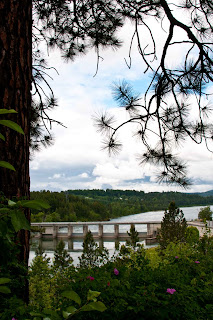 We found the bank and made the exchange easily.  I tried to upload a picture of the Canadian money ... it's gorgeous with silver strips, each bill a different color.  Interestingly enough, my program recognized it as currency and refused to open the images.  I will try my phone camera ... when I have service again!!!  In all our travels so far, AT&T is WAY behind in service.  Sprint seems to be the way to go.

By now it's lunch time, and Dan and I are starving, as usual.  A quick check of YELP brings up 5 out of 5 stars for Joels Mexican food. 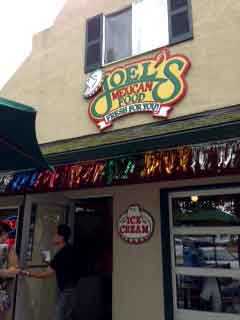 Fish tacos were recommended by the cashier, so that was the order.  They were definitely 5 star.  As Dan said, funny how good fish sticks can taste!!! 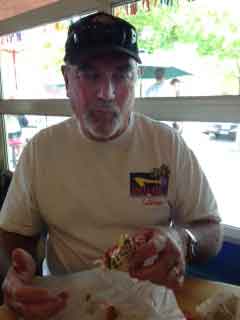 Patty had a list of Thrift shops to check out ... MUCH nicer than the Thrift shops in my neck of the woods.  She picked up a couple of things, including a $4 Black and Decker steam iron I need for my RV ... not that I iron anything, because I don't!!!  However, it might come in handy when I get a miniature sewing machine for quilting on my breakfast table!!!  Dan was very patient with us, but that's because we plied him with ice cream and carrot cake for dinner!!

The flowers up here are amazing ... everything is in bloom!  Patty knows the name of EVERYTHING ... I just say look at the pretty flowers!!  These columbines were gorgeous!! 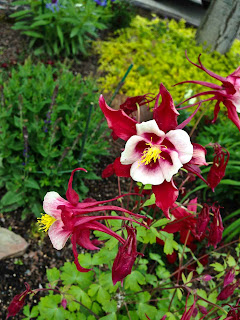 We hit the Amtrak train station and drove down by the beach before heading home.  Tomorrow Patty and I will hit up quilt store #37 .... so many quilt stores, SO LITTLE TIME!!!!!
Posted by Nancy Kissack at 7:21 AM