We dropped my Jeep off at the dealership with an estimate of $.00.  Thank goodness it's still under warranty.  I jumped in with Patty and Dan and we headed North, but didn't get much further than Black  Bear Diner for breakfast.  In about an hour I received a phone call from the dealership that my Jeep window motor was broken.  A new motor from Portland would arrive in the morning and should be ready by 10:30.  Pretty cool!!

Dan had heard about a Crooked River Dinner Train, so he drove that general direction, through Redmond and Terrebonne.  Little did he know that Patty and I had a long list of quilt shops to visit in that area.  Past lots of horse country, we found the Crooked River Ranch RV Park.  We would never have found it without being adventurous and just taking off on side roads.  A big surprise at the RV park was the Hollywood Road.  It's not shown on any map, nor is it listed in the credits of the infamous movie that was filmed here.

The Way West, starring Kirk Douglas, Robert Mitchum and Richard Widmark was filmed in the 1960's.  The Hollywood road was built to haul cameras and stars to the bottom of the canyon. 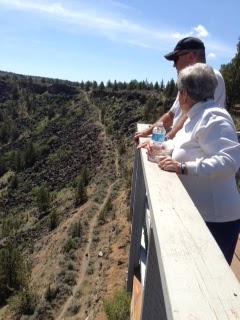 Here the road continues to the bottom.  The dramatic finale of the film is when wagons, horses and people are lowered over the cliffs to the bottom as they conquer the last obstacle on their way west. 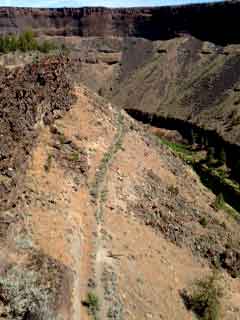 Dick Chandler, one of the original ranch hands on the property said he enjoyed working with everyone except Richard Widmark, who drank too much!!  The movie didn't win any oscars, it was a big flop.  I saw it many years ago on a "B" Western channel ... it wasn't memorable except for lowering the wagons.  I remember being pretty impressed by that!!

Next to the RV park is a beautiful golf course ... the Statewide Moose Tournament is being held here next week.  What a great place we found ... oh and they have full hookups with lots of room. 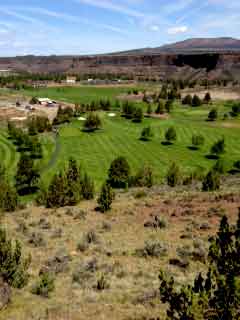 Unfortunately, I don't have many photos on this day's trip.  I left my camera in the rig and had to use my cell phone!!  Bad Nancy!!

On the ride back Dan was nice enough to stop at several quilt shops where I scored big time.  When we pick up my car today, we will probably stop at a couple more!!  We cruised around the general neighborhood looking for the train tracks.  Dan was told at the RV park that it had gone out of business some time ago.  $100 for a dinner train was too expensive for the locals.  We did locate the tracks but no train cars were found.

Back home, my puppies were glad to see me!!  Some excellent tri tip barbecued by Dan made the end of good day,  really great!!!
Posted by Nancy Kissack at 7:28 AM