Actually, it's the 25th anniversary of my 39th birthday!!!  What better place to spend it than with friends at Stone ridge Motor Coach Village up by Coeur d' Alene Idaho.

We left Camp Walmart after picking up a few more supplies before crossing the Canadian border.  What goes down, must go up, at least in RV world ... the steep drop into Clarkston by the confluence of the Snake and Clearwater Rivers was followed by another steep climb out of the valley up Lewiston Hill.  The view from the top was hazy, but amazing.

The drive up was beautiful.  There's miles and miles of green farmland here.  Make hay while the sun shines ... and that's exactly what they do here in the spring.  Hwy 95 was a little narrow and somewhat rough.  I really had to pay attention navigating the rolling mountains!!! 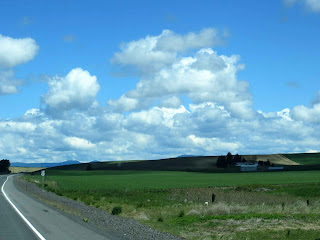 We turned off at Coeur d' Alene and headed West on Hwy 41 to Blanchard, population 261.  A semi-ghost town, it was previously a large logging community.  Where's the quilt shops?

Stone Ridge Village also has homes, condos and townhouses and a beautiful golf course, all at a pretty hefty price, by the looks of it.  Our free stay, isn't exactly FREE!!  We have to listen to the sales pitch ... I already have my "NO" answer ready to go!! 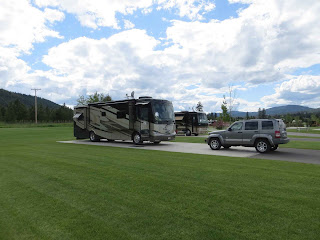 This is an example of a local owners lot ... seems everyone puts in a large shade structure, BBQ and building which I assume holds a washer and dryer, maybe a kitchen.  This particular one also has a large pond and waterfall.

Well at this point, I planned to upload a couple more pictures, but Google Blogspot isn't cooperating.  It took 1-1/2 hours to upload the top three, which usually come up in 10 seconds.

One of the considerations in a private park like this is that you never know WHO might be your neighbors when you purchase your lot (which isn't going to happen!!).  In my case, last night a rig pulled in with 7 people and one dog being led by maybe a four year old.  I bet you can guess what happened when I took Jessie and Cooper out.  They didn't seem to be bothered at all that Jessie was about to take his head off, nor did they apologize for the dog running loose.  I think I'm taking after "Bad Nick"!!

Hopefully Google gets their act together and I can upload more images later.  For now, it's off to the "Sales Pitch"!!!!!
Posted by Nancy Kissack at 8:53 AM