Snow ... snow ... everywhere you looked ... snow!!!  We kept checking the weather forecast for Enterprise Oregon.  Here's what we saw ...  no rain, certainly no snow and sunny weather.  WRONG!! 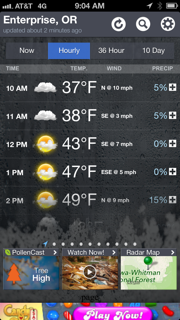 The Weather Channel is not the only one I checked.  I looked at Yahoo Weather and lots of radar that showed zip .. nada .. nothing.  So this is an optical illusion!!  And it only got worse.  Where's the Valium?? 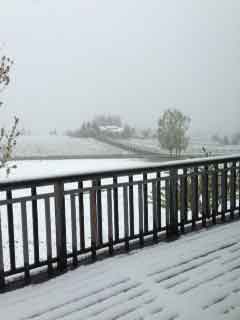 Finally at 1:30 pm it quit and we quickly said goodbye to Buddy and BooBoo ... oh, and Diana and Bob, who had provided the best hospitality EVER over the last few days!! 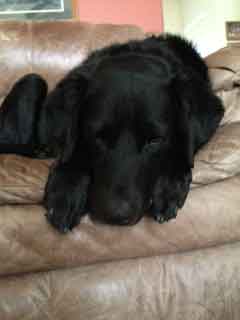 We rushed out, unhooked everything and took off up Highway 3.  Where's the Valium??  Talk about an exciting ride.  From 4100 ft (where it was snowing) we went up to a little over 4600 (no snow thank goodness), then dropped to about 500 ft!!!  It sure felt like it anyway ... cliff on one side, sheer drop off on the other ... 25 mph for a really long way.  At the bottom, we crossed a bridge and headed back up.  I think it was worse going uphill!! 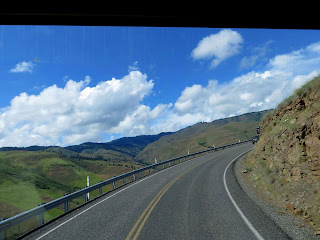 A really long, long, two hours later, we arrived in Clarkston, WA, next to Lewiston, ID at Camp Walmart.  Later, while waiting for dinner, I read that neither Lewis or Clark set foot in Clarkston.

The recommended restaurant for dinner was Roosters on the Port Walk, a half mile walk.  About the time we headed out, the wind came up along with some huge raindrops, so we hotfooted it over to a much closer Bogeys Restaurant at the Quality Inn hotel.  YELP said it had 4 out of 5 stars ... but not this time.

Patty's salad seemed to be okay ... Dan's "full" chef salad looked like Patty's half salad, and my spinach stuffed chicken was raw ... RAW!!!!  So we sent it back.  I suspect the Chef was having a bad day.  The waitress said she would get another whole dinner for me to-go.  When she finally arrived with the box, she said it was not on the ticket, AND offered a free dessert, which was pretty nice.   A tray of goodies was brought by ... apple crisp with ice cream and two spoons (Patty deferred).  If you happen to come here (but please don't) I would NOT order the apple crisp!!

Back in my rig, I checked out my "new" chicken dinner.  Believe me, this piece of chicken is cooked really well ... but that's okay, it was free!! 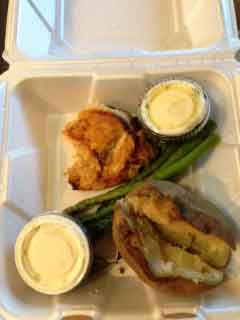