It's actually spelled Pend Oreille.  I guess you have to be French to get that pronunciation!!! 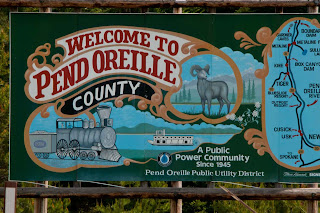 A huge river with lots of islands, it's half a mile wide in places.  Yesterday we drove down one side (and back on the other) on an exploration trip. 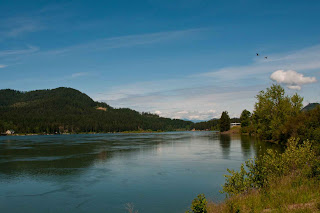 All along the river were rotting posts in the water, the remnants of docks.  We read that steam ships came all the way up here from the Columbia River, dropping off supplies and taking back lumber and people.  At several points on the river, bridges have been built ... 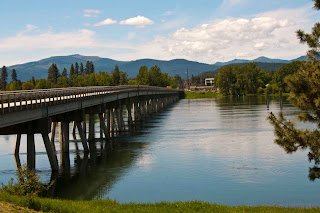 At this small store/museum at Tiger I spied chocolate chip cookies.  In talking to the young man at the counter (it was his second day at work), he said PLEASE eat them ... they were free and he didn't want to eat them all.  No problem there my friend ..... but just because, I stuck a couple dollars in their donation crock.  This store, named after Mr. Tiger, sported some great museum pieces, as well as the original post office for this area, complete with letters and postcards in the boxes from as far back as 1949.  Definitely stop in here and check it out. 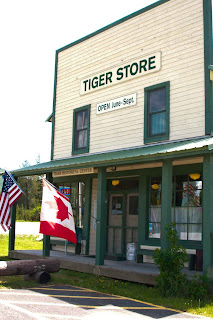 At this point, we saw this sign on the road ... I guess we are pretty close to the Canadian Border.  I'm really hoping this is NOT the way we are driving ... it's a nice road for small jeeps, even tractors, but maybe not our huge RV's. 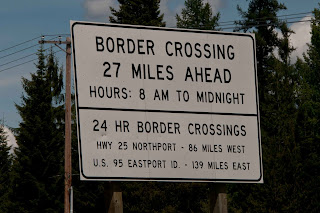 Finally our destination ... Ione.  Dan had heard there was a train that ran here, operated by the Lions Club.  We found the cars, but no engine.  It only makes a few runs beginning in July.  Like all small tourist trains, this one needs help too.  A gentleman making repairs to one of their buildings, said they were one rockslide away from being closed down. 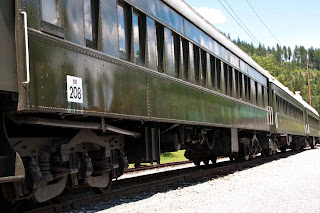 We headed back in time for watching NASCAR ... well not me.  I spent my time on the internet researching spinning wheels and playing with the puppies.

They have a great dog park here, so I took the two terrors down while no one was there, to run and play.  Except they didn't!!!  Neither have been to a dog park and had no idea what to do.  I threw a ball for Cooper a couple times, but he doesn't bring it back and Jessie just kept rolling in something that must have smelled nice!!!  Okay, we're done with that!!!

Dan's famous BBQ'd chicken and Patty's best ever salad finished off a great Memorial Day.  It's nice to see so many flags flying in remembrance of our Veterans.  They have given their all so we can live free!!  Lets celebrate them!!!
Posted by Nancy Kissack at 7:26 AM