7000 years ago this area was covered with cinder cones, volcanos and lava tubes.  We headed out to  see Pilot Butte first.  Both Pilot and Lava buttes are very tall cones that stick up out of the valley.  The views were amazing, which is why the Indians who were here first, were able to see the trappers and pioneers heading their way.  The pioneer woman in this image didn't look any too happy!! 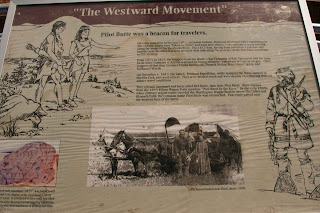 Today it seems to be used by people eager to stay in shape.  There were 15 or 20 hiking/running up the steep narrow road to the top.  Here's a view of Bend looking West. 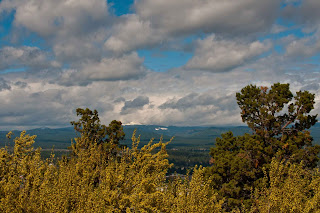 After a couple failed attempts to find a quartz heater for my rig (the one I have has a fan that is VERY noisy), we headed to Lava Butte.  This volcano spewed out tons of lava over a large area which is still very visible today.  It looks like it just happened!!  The views from the top were spectacular at over 5000 feet. 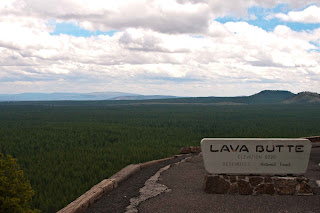 The lava not only encircles the mountain, but the main flow actually went across the Deschutes River. 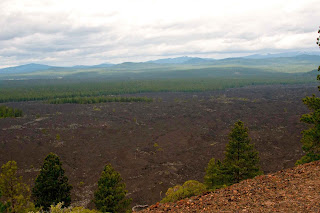 At the very top perched on the edge of the crater was a fire lookout station. 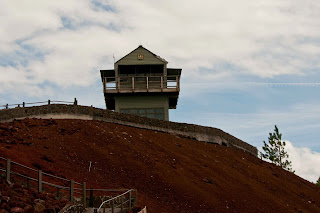 And local residents came out to greet the cars!! 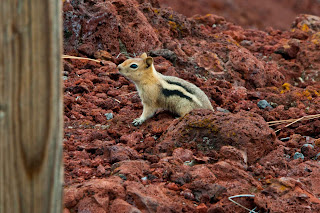 There were even dragons in the crater ... 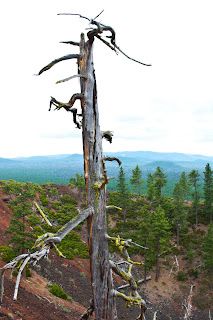 After a very cold, windy walk around the outside edge, we headed off to the Lava River Cave.

Upon arrival, the lady said we need light to see inside, which they conveniently had to rent for $5.00.  Dan led down into the cold dark damp cave!!  At 42 degrees, it felt pretty good for the first three minutes.  As we moved down the 150 stairs, it got VERY dark and I got VERY claustrophobic!! 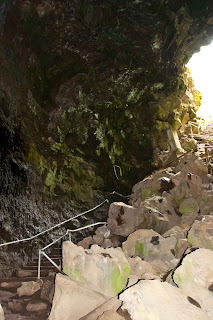 As soon as we got around the corner, we couldn't see or hear anything!!  The lamp did provide enough light to see that the tube was huge at this point.  According to the handout, it eventually tapers down to a large sand plug closing it off.  We never got that far ... in fact, it's about a mile long and we made it in 1/5 of that distance.  Funny, all the school kids that passed us had flashlights!!  Along the way we discovered lavacicles .... 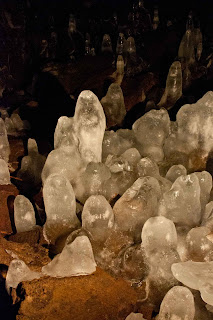 These are formed when water drips from the ceiling ...  You can see part of the walkway here, although most of the "hiking" was very slick and rocky. 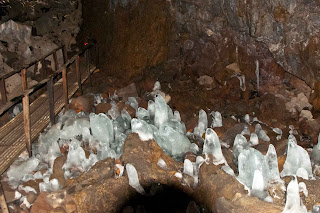 This image shows where the lava ran through.  When the lava quit flowing, the tunnel emptied out.  First discovered by a farmer, he used it to keep his venison cold ... like a fridge!! 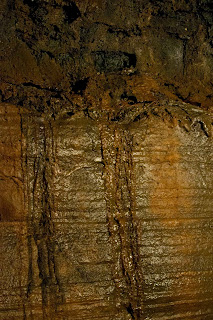 On the way out, we turned in our $5.00 lamp to discover we could have gotten flashlights for FREE!!  The nice lady forgot to mention that part.  One of these days I'd like to hike to the very end ... with my headlamps and flashlights in hand!!  But then Dan reminded me the last time I went in a cave with his group, I made it about 12 steps before I came out screaming and crying!!  Moaning Cavern entrance was only two feet wide and five foot tall when I discovered I was claustrophobic!!  In this one however, you don't have any idea how tall or wide the cave is because you can't see two feet in front of you.  Wear good tennis shoes and bring a coat ... along with your biggest flashlight!

Posted by Nancy Kissack at 5:43 PM