I'm sitting in my chair with my computer plugged in to the wall, trying to type in my lap.  For some weird reason, nothing charged up last night.  I admit I forgot to plug in the computer, but neither my phone nor my watch sucked up any juice.  Weird ... but then this is the desert.

As for my Blue Flame ... it is still as elusive as the coyotes around here and I'm not the only one on the hunt.  Tom came back yesterday to say there was a guy in RV Lifestyles who wasn't the least bit happy he had not received his either.

They seem to be on a truck somewhere, but no one knows where.  It's not looking good for Jonathan.  What I may do is ask very sweetly for Patsy and Bill to snag one for me since they will be here for the next month.  At least I would have one to hang out through the window and maybe get installed later.

As usual, I'm up early taking Cooper for a walk.  There has been an almost full moon for the last few days,  providing ghostly skies as it wanders through the clouds. 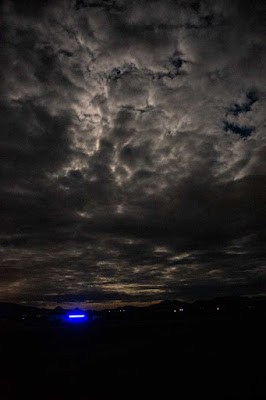 There wasn't much of a sunrise as the clouds obscured the sun.  My plan was to get the sunrise and the moonset at the same time, but that didn't happen.  I can't complain about the clouds since they make it warmer!! 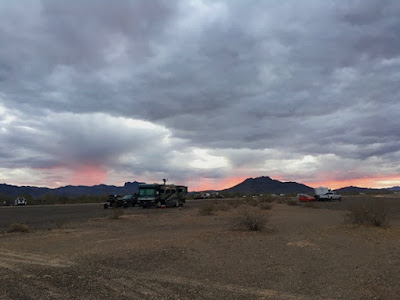 On we walked until I felt that first drop.  It said 30% chance of rain, but I didn't believe them.  Time to head back little Cooper buddy. 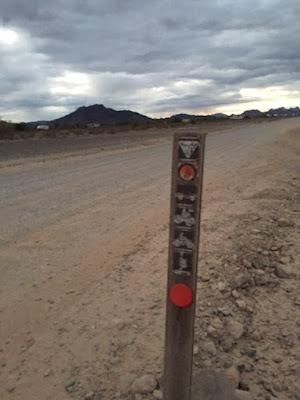 As you can imagine, there are piles of rocks everywhere, mostly for fire pits.  It's weird that I haven't actually seen or smelled any fires.  This one was different.  It must have had some bad juju attached because Cooper went ballistic.  He barked and barked, refusing to go any closer.  He's never done that before, so I believed him and we gave it a wide berth. 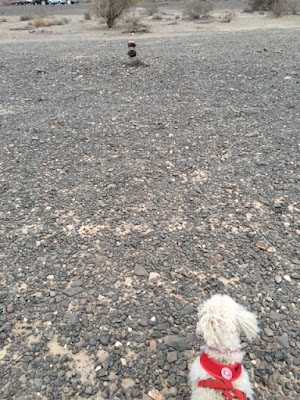 See?  I was telling the truth.  Rain drops ... and no, that is NOT Cooper drops.  It rained for maybe 15 minutes?  That was different! We spent most of the morning inside reading while Cooper crashed.  It's a hard job guarding the property. 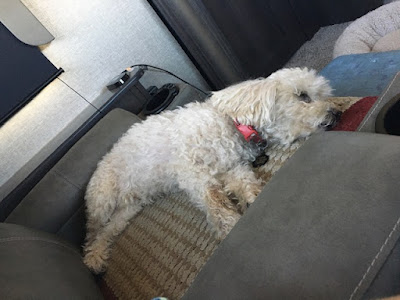 That was it, other than listening to four hours of generator running.  Today I'll actually go into town and once again ask about the heater.  I finally got my phone charged up this morning to find a message from friends Lynn and Dave Cross who are here in Quartzsite.  I'll see if I can locate them this afternoon.
Another weird coincidence ... I just found out one of my college friends bought a house here.  In Quartzsite??  Yup and he's in the process of moving his family.  I'm interested to hear that story!
So just for fun, as I was cruising the internet yesterday, I found this unique idea.  Probably not unique, but a good idea nonetheless.  I could use this ... or maybe I should just get rid of all my junk!! 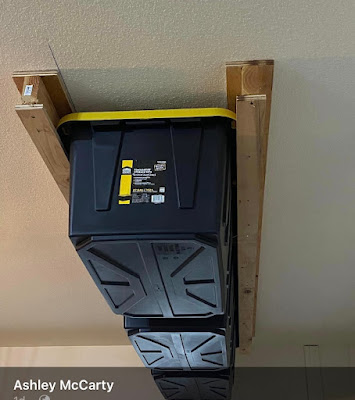 Fingers and toes crossed for a Blue Flame.  Gee, this is just like looking for toilet paper!!!

Posted by Nancy Kissack at 5:19 AM