Day nine and I'm back to normal for the most part.  No symptoms other than a tad bit stuffy.  YAY!!  Because Nancy is really tired of staying home!!

I have to admit though, the desert critters keep me occupied.  There's nothing quite like checking out the game camera for the nights wanderings.  You've just gotta love these guys!  There were two of them looking for something to eat in the water.

Amazingly, I saw four different coyotes on this night's captures.  One I'm sure I've seen before (probably Mom), along with three "kids".

This one seemed particularly wary of something.  He may be hearing Cooper and I playing on the floor since this was not so early in the morning.

This decorating style is called RUSTIC.  I just wasn't feeling it, but I DID taste it, on numerous occasions.  There is of course now a big chunk missing!!  The good news is the pans are only 6" across, so it's not as big as it looks.  Most of it will end up in the freezer for later when I think I'll croak without a bite of chocolate. 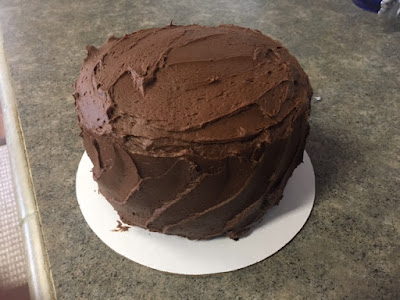 It seems the dates fooled me ... the first day of the quilt show is today. Yes, I'm going just to see what's up, but don't plan on staying long.  I just can't sit here one more day.  I'll let you know what I come up with.
To make it even more fun, the wind has come up just to keep everyone on their toes.  22 mph for most of the day is expected.  I still haven't dumped the RV tanks.  I'm waiting for a little more stamina before tackling that job, although it's really not all that hard.  I'll have to take a long jaunt around the countryside to shakes things up first.
In the meantime, I'm just biding my time til my machine is delivered Monday, although as of now, no one has called me back to confirm said appointment.  I'm trying to be patient since they have the quilt show going on, but as usual, I'm not so very good at that.
By the way, has anyone been watching the Freedom Convoy going on in Canada and at the U.S. border?  The media isn't giving it much attention at all .... no surprise .... but Canada is putting on a great show for freedom and NO MANDATES!!  The U.S. should follow suit, although most States are coming to their senses with the current CDC statements, as are other nations in the world.
YOU GO CANADA!!!!  So proud of your truckers!!

Posted by Nancy Kissack at 4:34 AM