The Killer Of Boredom!

Cough Cough Cough!!!!  Yes, that's the morning routine now ...  getting up, grabbing a cup of joe and sitting down to cough up all that congestion.  But it's getting better ..... MUCH better!!  So much so that I spent yesterday doing several KILL THE BOREDOM defense tactics.  Of course it takes a bit to dig out those tactics when your brain is in power low gear.

Cooper is exceedingly good at begging you down to the floor for a little roll-the-ball.  Who could deny that face?  Unfortunately, he jumped down from the couch and landed on his little footie wrong, spraining his ankle.  OMG I almost had a heart attack!  Thank goodness this morning he is better, although that foot still seems to be a little tender.  This morning all those balls are going to magically disappear. 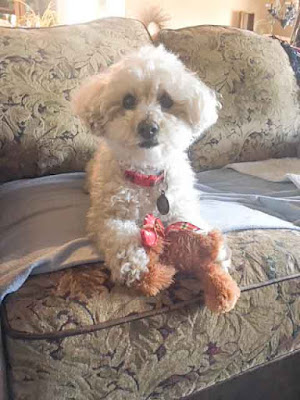 Before that happened however, we did get out for a short walk.  Sunshine makes for a boredom killer, even if it is still rather chilly.  What happened to the warm Arizona winters?  It's been in the 30's every night.  This is where the coyotes hang out and Cooper loves to smell the scents. 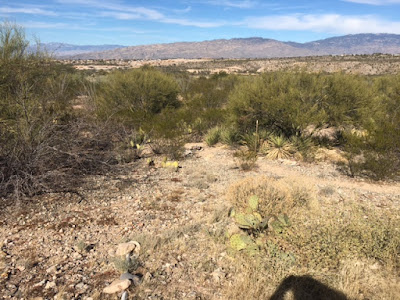 How about some cooking.  That always seems to occupy me for an hour or so and usually ends up with some belly laughs to boot.  It's a win-win!
Caramelized onion burger ... looks kinda purdy, right?  We started off on the right foot, getting the onions cooked to perfection.  They say you lose your sense of smell and taste with this flu, but that hasn't happened to me.  Those onions were delicious!!
I threw the burger in the pan, adding an extra minute or two because it was so thick.  Crispy on the outside, juicy in the middle, I made this gorgeous dinner.  That is until I cut it in half.
Good grief ... it's raw as can be in the middle.  I cooked it for about 12 minutes!  What the heck?  There was no eating it that way.  I stuck the entire thing in the microwave, expecting a luscious chunk of meat to come out.  What it did was just loosen up all that juice and completely soggyize the bun.  Yes, that's a word.
I disassembled the entire thing, stuck the patty halves back in the frying pan and covered it with a lid.  I threw the bun away and got a new one in the oven to heat.  That's when I got the phone call.  I couldn't really hang up, even though I knew my spectacular burger was going down the tubes fast.
I ate the final disappointing results of hard bread and overcooked burger, along with what few onions were left because I had eaten all the ones that fell off.  What a disappointment!! 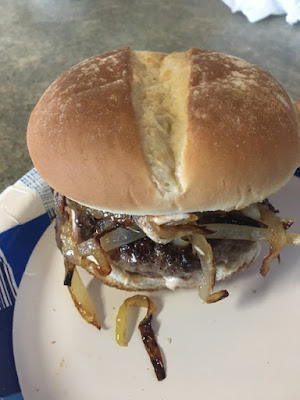 And so it goes ... at least I wasn't bored the entire time.  I know you ladies never have this happen and I don't know how you do it.
In the meantime, I got a call on my quilting machine.  It's going to be a long week.  They can't come until Monday because they are getting ready for the quilt show this weekend.  YAHOO!!!!  That will be a boredom killer for sure.  By then I will have been locked away for enough days I can attend the show.  Just to be sure, I used one of those home tests yesterday and it came out negative.
I'll be on the couch, trying to come up with something to cook for dinner again.  It's probably not going to be a grilled onion burger.  Maybe something out of a can!!