If you're going to do it, GO BIG!!!  Little did I know just how fast the tides were going to turn.  I didn't sleep at all Wednesday night.  I admit, I'm a wimp ... kind of like those husbands who think they are dying from a cold.  That's me .... I think I'm dying, or at least I feel like it.

I fed Cooper that morning, who did his usual pick up every bite, then spit it out before actually partaking of that good chicken.  And then I felt it.  That horrible heavy feeling in your chest that tells me I'm in for the big one.  Not a heart attack ... just a very bad session of sick. 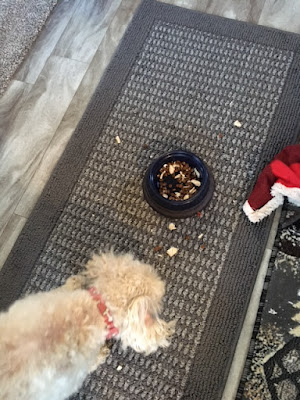 I made the decision in a flash, or at least as fast as my sluggish little brain could.  I need to get home before this sets into what I know it's going to be.  Forget the solar ... forget the heater ... just get home where it's warm and I can deal with what's to come.
Thank goodness for Bill and Patsy!!  I told them my plan, being very careful to stay yards away, and I began the put together.  Apparently Bill was watching me look rather bewildered as I tried to remember the sequence of hook up.  He came over to be sure I did it right and provided even more tips ... if I can remember them!!
I just knew if I stayed, things would go downhill fast.  It's cold, not so good for a cold, and instead of resting, I'm constantly moving Jonathan around to keep him warm and carrying Cooper in and out the door since he too is a wimp and cannot climb up the steps.
I said goodbye to sweet Gibbs and waved goodbye to everyone. 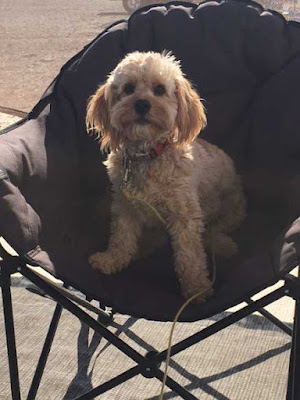 It was a long five hour drive back home, but boy am I glad I made that decision.  This morning the horrible sore throat and coughing has begun in earnest.  The good news is I'm warm and toasty on my couch with a down blanket and a hot cup of coffee.  Even better, Nurse Patty (yes, she's an ER Nurse) lives close enough to make sure I don't die.  That's a big plus!! 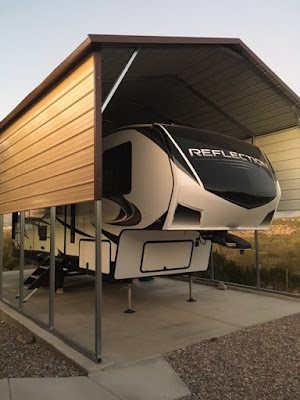 I even got the rig unhooked, although it took me 30 minutes just to be sure I wasn't forgetting something and make it roll off the end down into the gully.
On the way, I called Discount Solar who was very understanding and set up an appointment for me on my return trip.  The heater is still up in the air.
I'm coughing in earnest now, and though I had a temperature when I got home yesterday, it's back to normal, at least for me.  No matter ... I'm warm and Cooper is thrilled he can actually chase the ball more than three feet.
I'll be ....... on the couch!!

Posted by Nancy Kissack at 4:14 AM