Canning Cuz I Can

I guess this proves I'm a throwback to the days of the old west.  Preserving food was a must if you were going to survive on the ranch.  We had a large garden out back of the house that provided most of the vegetables we ate.

Beef of course was an every day affair, having come from that cow that tried to jump the fence and broke her neck.  Life was never lighthearted in the cattle business.  It was full of hard work from dawn to dark and death was an everyday experience you tried your best to avoid.

When the veggies got ripe, anything we couldn't eat within a few days was kept in the locker until canning day came around.  For the entire year, any glass jar that could be salvaged and turned into a canning jar, was lovingly stored in the freezer house.  They were very expensive to buy and thank goodness, easy to reuse over and over again.  You were in for a big whooping if you dropped and broke one of those jars.

We canned everything from cucumbers for pickles, to onions, tomatoes, green beans, okra, rhubarb, squash and potatoes.  It was a long arduous process to blanch the veggies before sticking them in jars as tight as possible, then pouring boiling water (full of spices in many cases) over the top.  Stick on a lid and process in the huge canning pot on the stove.

Nowadays, everyone can afford to just buy it fresh at the store, or in cans.  So when my buddy Patty suggested I whip up some of that apple butter I used to make, I said OKAY!!  By the way, we never bought jam or jelly.  Any fruit we could scrounge from the neighbors trees at midnight, was turned into jam ... perfect with that breakfast toast. 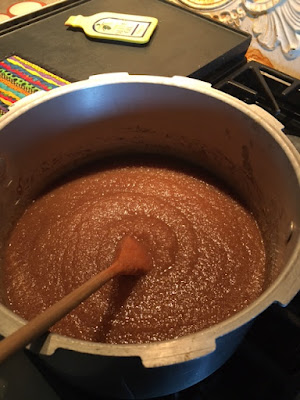 So I drug out my old canning pot and went to town.  Everything goes in the pot above, then is hit with a blender (we did that by hand in the old days) and cooked for about an hour.  In the meantime, I prepared the jars and lids which I just happened to find hidden in the very back of my pantry.
Yup this is the old way of canning.  Sterilizing the jars is important, as is heating up the jar lids so they will seal properly.   The pans are full of water, sitting on my stove with the burners on low. 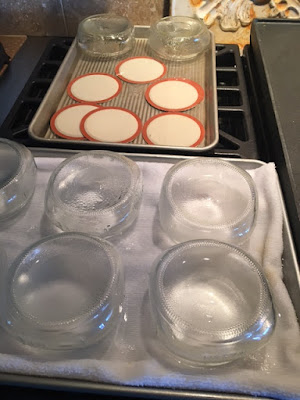 When everything was ready, I filled each jar to the top with yummy apple butter, placed the lid on and screwed down the rim very tightly.  Next up ..... the cooking process.  Way back over 60 years ago, we would just leave them on the counter until they cooled, which seals the lids tightly.  As they cool, the lid gets sucked down, assuring the contents won't spoil.
Nowadays, everyone freaks out about canning, thinking they will get food poisoning!!  So just to make everyone who is going to receive these jars feel better, I went ahead and boiling-water-bath processed them.  That means you put them in a big pot, cover it with an inch of water and boil it for ten minutes in this case.  Those jars of green beans we processed on the ranch, went for an hour or more. 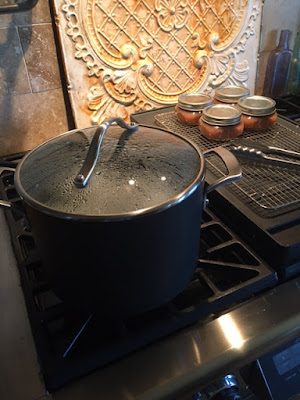 The set of new pots I bought came in pretty handy for this project. 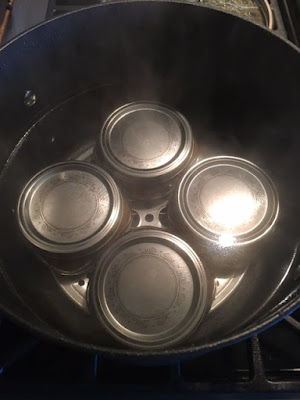 Once out of the boiling water, as they cool, the little dimples in the top of the lids will sink down with a pop you can hear, providing you an indication that they are indeed sealed.  Another trick is to tap each lid with your fingernail.  You can actually hear which ones are sealed and which are not.
I didn't have enough jars for the entire batch, so my fridge now contains two small jars of lovely apple butter for me.  I'll give the rest away for Christmas.  It was nice to reminisce about everything we canned in the olden days.
One of my all-time favorite things was tuna.  I spent some time up in Crescent City where I would go down to the docks and buy fresh albacore.  It was a terrible greasy messy job to cut out the fillets, but cut them I did, then packed them in canning jars.  I still have that huge pressure canner I used outside on the gas stove because the smell was too terrible to be inside.  BEST TUNA EVER!!!! 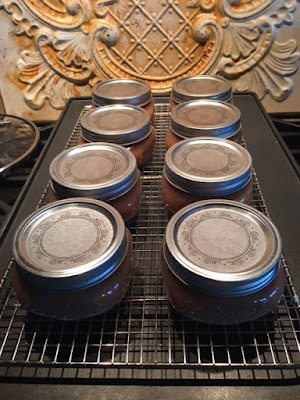 Time to sit down with a guilty pleasure .... hot cocoa!!  My all-time favorite is Swiss Miss with marshmallows.  I took this picture to show said marshmallow because as soon as you stir the cup, they disappear into nothingness. 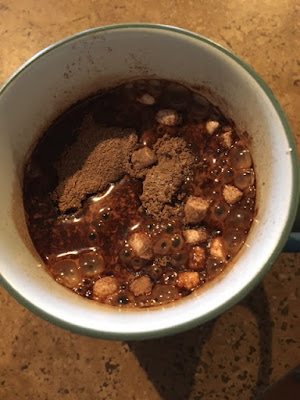 SOOOOO, I always add a few REAL marshmallows to enjoy as I sip this sweet nectar.  It was the perfect ending to a nice sunny day, even if it was cold outside. 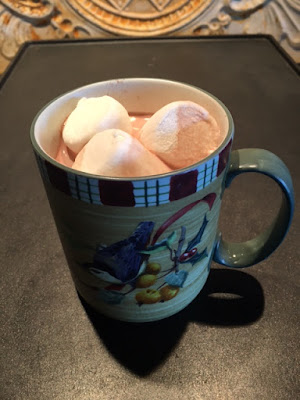 Shhhh don't tell anyone, but a lot of times I even put marshmallows in my coffee!!!
I hope Cyber Monday went well for you and you receive everything you ordered before Christmas.  I actually received that fabric I've been waiting for the last month.
AND ..... it's Magic Kingdom Day!!!!

Posted by Nancy Kissack at 5:40 AM