How NOT To Make Dinner

Doesn't a big slice of frozen peanut butter pie just sound WONDERFUL?  I thought it did, at least for the first piece, then it all went downhill.

I rather imagine it pays to follow the recipe.  Don't use extra crunchy when it calls for creamy.  Just to be sure it came out okay, I even bought a pecan pie crust.  THAT was my first mistake.  That first bite into the luscious filling tasted like rancid pecans.  Yessirree ... who knows how long that pie crust sat on the shelf before I bought it.

I forced myself to eat the entire thing over the last week, scraping the filling off the crust.  I do try not to be wasteful.  To be honest, it was hard forcing down that last bite of peanut butter too, just as the doorbell rang. 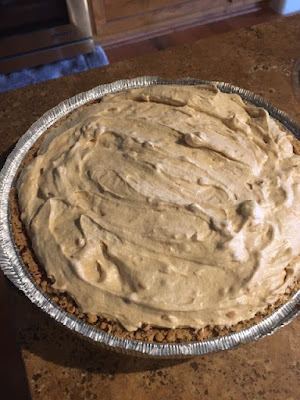 As promised, the Weedman was right on time at 8:30 am.  As you can see, it's rather foggy and getting worse every day, which is why I didn't go outside for a picture.  I did open the door, only to breathe in the horrible smell of grass killer.  He said they put that smell in it so humans will be wary until it dries.
Let me just say these guys did much more than I expected and were very thorough.  The entire front and back yards were sprinkled with weed and feed.  Then they sprayed every crack in the sidewalk, both front and back for weeds.  They also put something in the flower beds to keep out weeds the gardeners never pull like they are supposed to.
The main reason they were here was to spray my entire back forty to keep the weeds not only down, but completely gone.  Yes it cost me a chunk ... like gulp ... $400.  I know, I probably could have done that my myself, but I'm getting lazy.  The best part is they will be back every two weeks for six months, to be sure it kills everything, as well as putting on a pre-emergent.  Hopefully that will allay my fears of those firecrackers burning my house down. 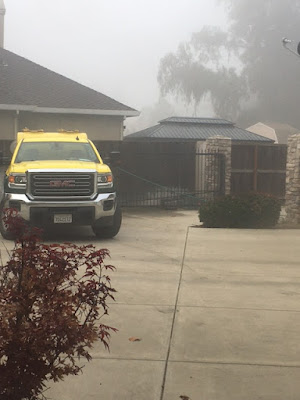 Unfortunately, that meant we were locked in the house for the next four hours.  They said maybe two until the stuff dries before puppy feet could go outside.  I waited much longer before carrying Cooper out to the road.  You just never know.  Whew that stuff stinks!!
It took three guys over two hours to get the whole thing done.  If my lawn looks half as good as my neighbors, I'll be a happy camper.  The lawn care once every six weeks is $90 and I can stop the service any time.  I'm sure I could do it cheaper, but I'd rather be quilting.
Or making cookies.  I found this Christmas cookie recipe I've been wanting to try.  It's not the normal tasteless sugar cookie recipe, it's shortbread. 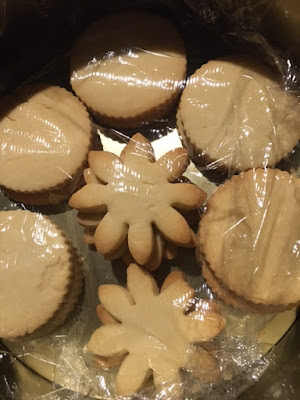 What was cool about it was you make them the day before and decorate the day after.  I'm not so good in the decorating department.  This is only nine of twenty, which turned out to be 16 since I broke and ate four of them while decorating.
Sadly, the blue icing recipe called for peppermint flavoring.  Of course I've no idea how old that bottle was and the flavoring left a lot to be desired.  Next time I'll come up with something else that wasn't bottled ten years ago. 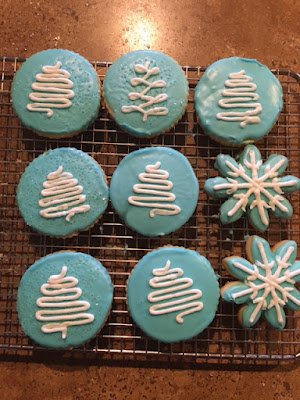 While still cooped up in the house, I decided to use up some of that Swiss cheese in my Mac N Cheese.  Let me just say you CAN mess up a good Mac recipe by adding the wrong stuff.  I probably won't ever get that taste of sour milk out of my mouth from testing the carton whose expiration date was still a week away.  There are no words!!
I used cheddar cheese, about half as much Swiss and a handful of parmesan, just like the TV cooks said.  Since I had a bag of really tasty chips, I crumbled them up and covered the top.  That was my third mistake.  It looks delicious, but those chips burned and tasted terrible, not to mention the Swiss cheese.  Yucky poo!!  It took me an hour to force down one plateful.  I won't be making that mistake again! 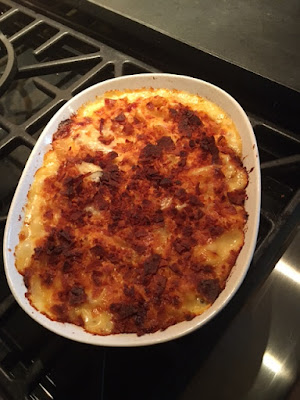 All the while, Cooper kept an eye out the front door windows for those bad guys walking across his lawn. He also lets me know every time a car passes by.  Bark bark!!  He's such a good watch pup!! 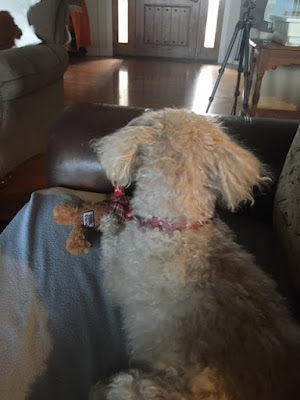 And so the day ended with visions of yummy Mac n cheese swirling in my head and a stomach ache from all those cookies.  Today I contemplate washing the fifth wheel.  AND it's Magic Kingdom day!