At last, in my little foray into the foothills, I found the roads I drove as a kid, headed to greener pastures for our cattle.  Back in the dark ages, trucks were not what they are now.  Shifting gears was the name of the game, a not so easy pursuit with the old transmissions.  You had to double shift just to get into neutral in our truck!  Shifting down was another story altogether, praying all the time that you didn't kill the engine on an uphill stretch, loaded with thousands of pounds of beef.

I actually became pretty good at it, only because of one tiny hint my dad gave me.  Listen to the engine.  That advice served me well, especially with caterpillars.  If you listen, you can HEAR when you are about to get stuck.  I went on to drive nothing but stick shifts for the next 30 years. 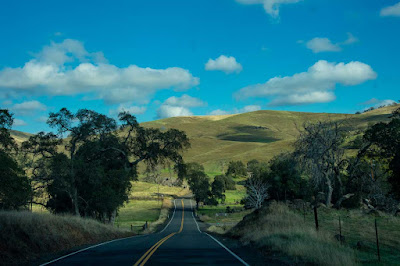 These were the hills we rode horses over, gathering the cattle at the end of the season so we could haul them back DOWN the hills to our home place.  This is certainly something I never saw.  Hard to tell, but there is a solar panel there to give electricity to the motor pumping out water for the cattle. 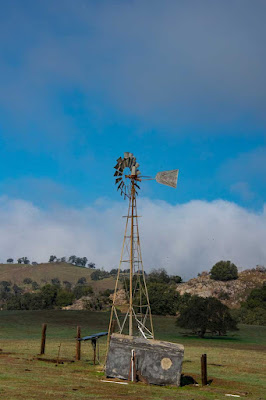 Everything was going along just fine until I spotted the sign for Buckeye.  I don't remember it being on the map, but off I went to check it out.  In no time, I was lost.  With no phone service and no map to follow, I just wandered around until I finally found a road with a familiar name.  I knew Ben Hur Road went to Mariposa, so I went the opposite direction. 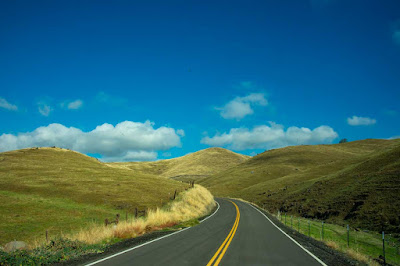 Thankfully the road finally improved in width and construction, but the corners were just as tight as previously.  Across the way you can see the stone fences.  These were built by Chinese coolies in 1862.  Each man was required to build a rod and a half a day or forfeit his job.  That's about 8 yards or so.  As you can see, they still stand today, over 160 years later. 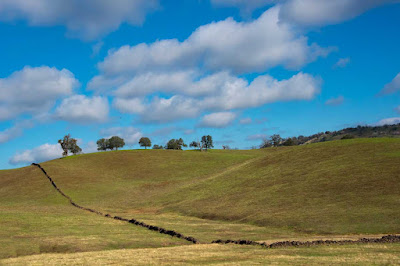 Suddenly the road narrowed again as I wandered around the area looking for a way home.  There are still a few people living here in very old small houses, alongside some mansions recently built in subdivision-like areas.  So much for running cattle here.
I do remember going to one ranch in the very early morning hours to find the lady of the house baking biscuits.  We all sat down for breakfast.  I must say those were the best biscuits I've ever eaten and I remember them to this day.  Or maybe it was because I was seated next to Eddie.
Eddie almost saved me one day as we were gathering cattle.  We had to cross a big river, where he said to all ... "this river has quicksand".  He crossed first as my dad kept his rope ready to throw.  Once across, we were told to ride the exact same route and not deviate a foot.  I got halfway across when my mare went down, having stepped in the quicksand and sunk to her knees.
Lucky for me, she was able to lunge right and left and get out just as Eddie threw the rope.  My hero!!  Of course I now looked like a drowned rat and was soaked from head to toe.  No matter, we continued on with the cattle.  Even if you thought your leg was broken, you kept going .. this was no job for sissies. 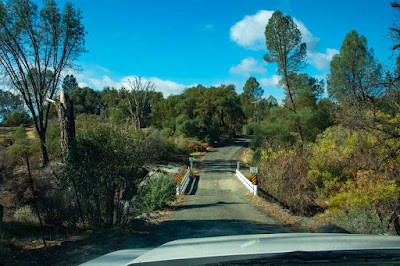 At last I found a sign that said Road 140.  I knew where I was, or at least I thought I did, and headed out of the mountains.  As it turned out, I was STILL lost, thinking I was ten miles further south, but I finally made it to the next town where my plan was to stop at the old Mexican Bakery and pick up tamales.
I remembered stopping there many moons ago for carnitas.  Sadly, they were closed, as in out of business.  I headed back home to a very happy puppy who thought I was never coming back.
I tried to research the little town of Buckeye, but could find nothing.  There are lots of towns named Buckeye, but none of them live here.  Next up ... I'll take a little trip to the gold rush town of Mariposa.  Maybe next week, because this week is completely booked up with Elk stuff.
Here's my latest bird.  I'm pretty sure one of my readers knows exactly which state this one is from.  Don't let it fool you ... I think there are FIVE different red birds in five different states!! 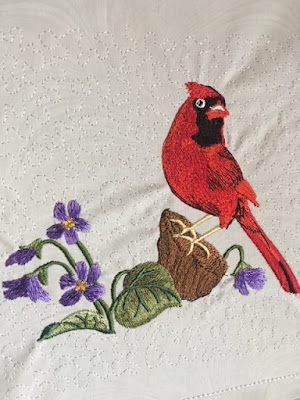 This morning I'm off to help serve brunch, which is a moneymaker for the Lodge.  I've become very happy to just sit on the couch for the last couple of weeks.  We shall see how I fair standing up for three hours.