So much for grilled cheese.  It's TOAST!!  Sometimes my days turn out like this ... dark and acrid.  Other days, when I'm not distracted, I actually get to taste a grilled cheese sandwich.  I knew the signs .... being preoccupied with embroidery .... so I turned the flame on very low.  I guess time flies when you're having fun, because soon I smelled the smoke.

Undeterred, I took a spatula and scraped off the one side of bread, leaving the cheese in it's wake.  I slapped on another piece of bread and stood there without moving until it was done.  It tasted delicious as a grilled cheese should.  This piece went in the trash. 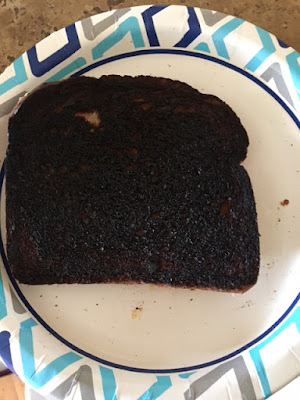 Here's what I was working on.  The Arizona cactus wren.  I'm not sure what he's standing on, because I've never seen any cactus like this.  No matter, I was on to Colorado for the Lark Bunting.  That's one I've never even heard of before. 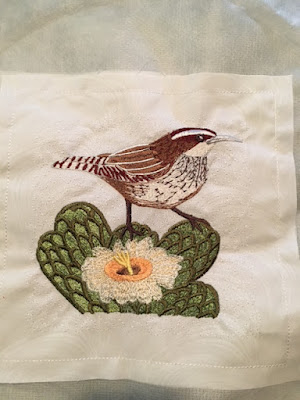 In the aftermath of Niagara Falls and toast, you'll probably be surprised to see this.  I finally made a trip to the grocery store.  Isn't it amazing how in such a short period of time the shelves in the store are now half empty and tri-tip beef is $25.00?  Maybe someone can explain it to me.  I ended up with the not-as-expensive pork because now there is a shortage of chickens!!!  I'm sure the pigs are soon to follow.  Sounds rather like Venezuela to me. 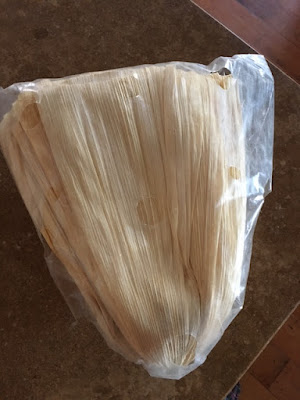 Most of you know those are corn husks.  Yup ... I'm making tamales.  It's a long process that many people don't do any more.  Oh I've tried those ones from Costco with a teaspoon of meat in them and no flavor.  I've even tried the local carniceria, only to find they are too skimpy with the meat and just don't taste like real tamales.
This recipe is old ... like back to 1970 ... and written on a recipe card in a box I keep under the counter.  Remember those recipe boxes?  They held the greatest recipes of mothers and grandmothers, neither of which ever made tamales in our house.  I don't know where this recipe came from.
After an hour of cooking in a homemade sauce, the meat was done.  I don't remember using my mixer in the old days to chop it up, but believe me, it works like a charm and in about 30 seconds. 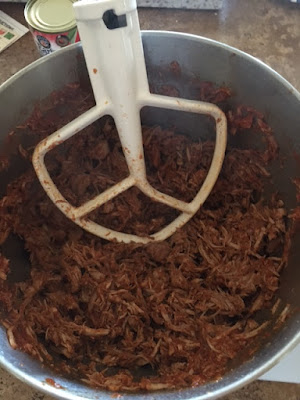 While that was cooking, I drug out my biggest steamer pot to soak the corn husks.  I admit, I did not make the masa.  No one makes it better than a little Mexican store across town.  I bought 5 pounds, thinking I would have lots left over.
Spread it out and add a heaping serving spoon of meat, then fold it up and turn under the bottom.  I used to make little strings of corn husk to tie them shut, but that's a waste of time. 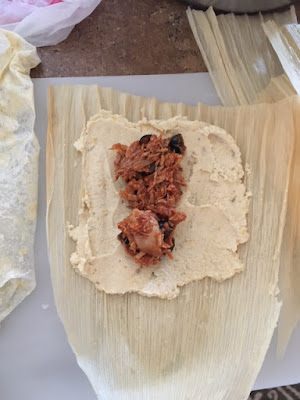 In no time at all I had tamales ready to cook and water splashed all over the kitchen counter and floor. 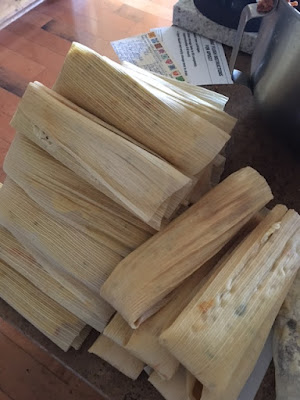 Here's the real problem ..... how to cook them.  My first thought was instant pot, but for the life of me I couldn't find a steamer contraption to put them in.  Maybe my old pressure cooker which is huge would work, but has the same problem ... no container for the tamales.  Why I didn't just put them in the pasta cooker, I've no idea.  It would have been perfect, now that I think of it.
At last I found a Chinese steamer pot (appropriate, don't you think?) that fit in the 8 qt instant pot.  I put the balance of them in the old pressure cooker, covering the entire top of both with corn husks to keep the water out.
The instant pot took the longest at 45 minutes, but cooked them better.  This one fell to the bottom of the old cooker and got a little too much water, so I decided to eat it first.
Let me just say there is nothing much better than a homemade tamale with great masa and lots of tasty meat.  Now I've got 31 more to eat!!!! 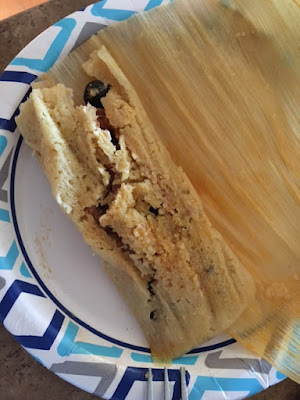 Somehow after all that work, I was more tired than I expected.  I held the couch down for about ten minutes until my feet started cramping up from standing too long barefoot.  I actually had to put my running shoes back on to make them happy.  I only hoped I wouldn't be wearing them to bed.
No matter, those tamales were worth every single cramp!!!  I'm having tamales and eggs for breakfast!!!

Posted by Nancy Kissack at 6:41 AM