Thank a Veteran for your freedom.

We owe them everything!!!!! 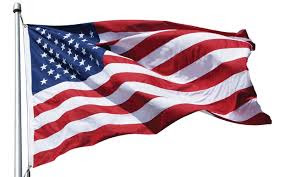 I don't know exactly what makes a day really long, since they are all about the same time length, but yesterday was longer than usual.  I suppose it's because I had meetings at the Elks starting at 6:00 pm.  It's the expectation of driving in the DARK, not just on the way home, but now GOING TO also.

When I was much younger, I had one lousy cataract that caused blindness in one eye.  It seemed to happen overnight.  Since I was a dive instructor and really needed to see everyone's computers to make sure they had air to breathe, I required surgery.

Go Bionic they said ... get these special lenses and you will never need glasses again.  They lied.  I don't mind wearing the glasses at all, but the bionic lenses in my eyes are horrible when it comes to light at nighttime.  I can see just fine, but they magnify light by 100.

You will see a small round headlight in the distance.  I see a searchlight-sized blob of light that blinds me because of the concentric circles in my eyes.  Sometimes when the light is just right, I can even SEE those circles.  It's weird.  Anyway, I just drive a little slower, like all the old folks I complain about, and I'm just fine.

I spent about half the day on the new Singer machine.  I would say it's a Volkswagen compared to my Ferrari across the table.  No offense to Volkswagen lovers, but it's a box of sheetmetal with four wheels and a big rubber band.  All of a sudden it decided to wad up the thread on the bottom the entire length of a 54" seam.

And those SEAMS!!  I followed the instructions exactly, spending the extra time to iron every one the exact correct direction.  First I sewed these together ..... 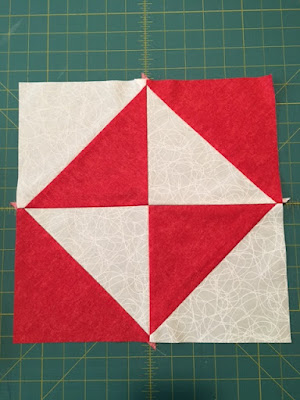 Then cut that into pieces at 2-1/8" spacing.  Anyone who sews knows that should have been a dead giveaway.  If you have to be that accurate in cutting, you can imagine how accurate you must be in sewing. The Volkswagen is not accurate at all.  It wanders along the highway, having much trouble going uphill over the seams and screams downhill leaving gaps along the way. 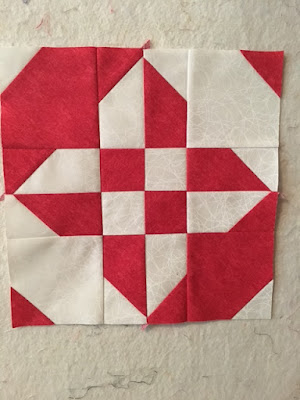 Here's the thing .... every 1/4" is not the same.  The 1/4 inch on the Ferrari is not the same as the 1/4" on the Volkswagen.  That means once you start with the Bug, you have to keep going with the Bug until you finish or it dies.
When it came time to sew all the squares together, all that ironing went right out the window since only one in 50 seams were matching up ... or nesting as we say in SewingLand.  I finally just turned the seams and made them go where I wanted, in spite of then having to spend an hour ironing the back, flattening all the twisted seams.  It's a good thing I'm going to quilt this myself, because I would be totally embarrassed to take it to a quilter.
I have two borders to put on this one, where it won't matter which 1/4" I use.  I removed all the embroidery tools from the Ferrari and began using it to finish this up.  It was like driving a Mercedes on the autobahn .... fast, smooth and sweet!!  I must say I love this pattern in spite of it's difficulties. 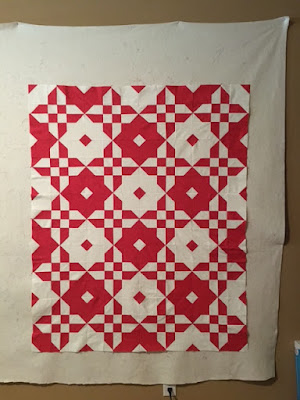 In the meantime, we have a new player in the back yard game of scent marking.  This baby has showed up twice now.  He doesn't look all too happy, yeah?  There are now three Kitty Kitties roaming the backyard at night.  The time change doesn't seem to bother them at all.
Every morning when I let Cooper out, the game resumes to see who can mark the most trees and bushes the most number of times.

See ... I told you!!!
Today I'm off on an excursion into the Wild West where we used to haul cattle.  This is where I almost tipped the truck over going around a corner when the cattle all shifted to one side, kind of like going around the corner too fast and all your grocery bags falling over on the floor.  Hey .. I was sixteen years old when my Dad handed me the keys and said DRIVE!!  It was on-the-job training!