It was a good day!  Any day that you get some stuff accomplished is a good day in my book.  Accomplishment #1 was the retrieval of my free turkey.  I was pretty surprised to see it was a Butterball.  Of all the turkeys I've cooked in my lifetime, THIS is the best brand.

Even better, it saved me some moolah to spend on fabric, or some other totally useless item.  At 13.39 pounds of beautiful white meat, it would cost me $12.98 at Save Mart (that's for the cheap brand).  The same turkey right now would be $26.37 at Target (also a cheap brand).  It pays to shop around in this neck of the woods.  Now the question becomes .... do I take a chance on smoking it or do I stick it in the oven?  Either way, I'm determined to brine it this year and see if it makes a difference. 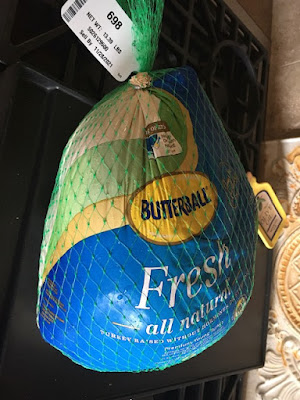 Accomplishment #2 ... update my phone.  We all know how that has gone in the past.  Badly!  I was hoping with all the kids finally back in school and NOT on their computers playing steal-the-car or kill-the-alien games, that the magical lines in the sky would open up just enough.
It took some time, but I couldn't believe my eyes when it finally worked.  Previously I tried three or four times with no success.  Of course updating only got me another NEW message that it needed to be updated once AGAIN.  I gave up when it said 5 hours remaining.  I'm still looking at internet provider options. 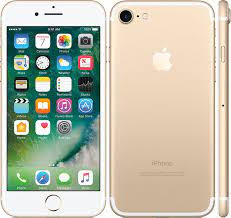 Just then the phone rang.  Accomplishment #3.  Remember my beautiful toolbox I purchased for the truck back in September?  It's going to hold the generator(s) and other tool-like stuff to free up some space for more important things like fabric and quilts.
The problem became securing it in the bed of the truck.  There were no instructions on that little problem, so I asked my good friend Mark if he could help.  Mark knows just about everything fifth wheel and truck related.  I just love a handy man!!  "Can you come over now and I'll fix your toolbox?"  He didn't have to ask me twice. 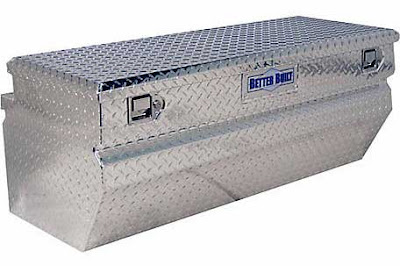 I awkwardly put the toolbox back in the truck and raced over, thinking this would be an easy job.  Just drill a couple holes in the bottom and secure it to the truck bed with screws.  Little did I know what was REALLY involved.
It took me awhile to figure out what ferrels were, and even longer to see what the heck we were doing and how they were installed.  As he crawled under the truck to make sure he didn't drill into a gas line, he was surprised to see my huge 50 gallon fuel tank I had installed.  Boy do I love that!!!
It took three different drills to get the ferrels in place with me using the drill up top while he held the piece with vice grips from below.  Teamwork!!  Finally it dawned on me what this was for.  We placed the toolbox over the holes and screwed in bolts. 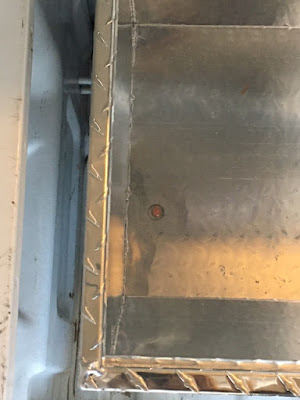 Here's a closeup.  Now anytime I need to remove the toolbox for whatever reason, I just take the bolts out and voila! ... the toolbox lifts out.  So you really CAN teach an old dog new tricks.  This is something I've never seen before.  Plus ..... he had two really nice powerful battery operated drills.  I may just need one for Christmas!!  If you are going to be handy, you need TWO drills. 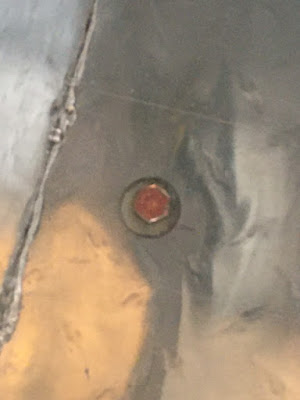 My last task of the day .... I'm just so busy you know ... was to find out what this building used to be.  It's obviously something grand, with all those granite pillars out front.  I don't remember it as a kid, since our route of travel went North instead of South.
I called the Post Office and talked to a very nice gal.  She confirmed her thoughts with the other person working there about the origins of the building.  This used to be a general store.  Pretty fancy!!  In fact, there were many general stores in Raymond back in the day.
This one had a gas pump out front before the paved road came through.  Sadly the fuel pump caught on fire one day.  It burned the building completely, leaving all the granite standing.  It was never rebuilt and still stands to this day. 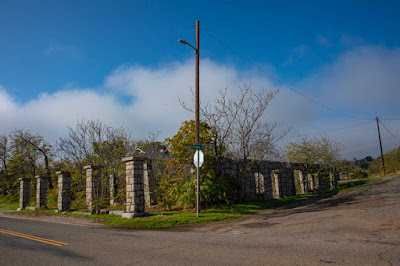 The gal mentioned the museum is the place to gather information.  It's only open on Sundays, so you know where I'm going this week.  Here's my teaser of the day ... do you know what this is?  Yeah, the sign gives it away.  More info on that later. 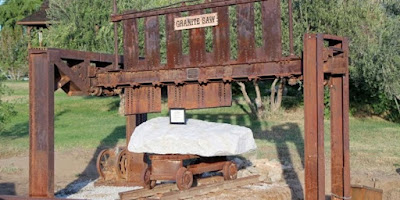 There was another Lodge function last night that I was required to attend.  That time change thing is killing me since I got to bed around 11:00 pm (that's midnight MY time).  It's going to take me all day to recover.  Dinner did garner a prize ... not for me, but for Cooper.  I brought home over half of my steak to share with him.  At least it will keep me from chasing after the ball while he eats!!