Disaster In The Making!

Here's Cooper and I early Thanksgiving morning, contemplating the nice warm fire and the day's menu.  I like cooking big dinners because it's such a challenge from my normal lean cuisine in the microwave technique.  It's also my chance to use that beautiful oven for the only time this year.  THAT can be hazardous!! 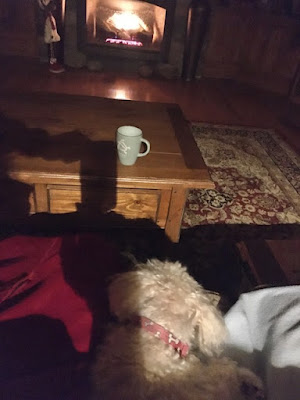 I even went so far as to set this nice table for one.  I didn't use it, it was just for the picture.  I put it all away so I didn't have to wash everything.  I completely forgot I had a dishwasher, but I'm getting ahead of myself. 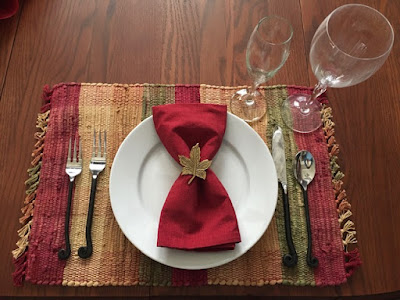 There was a slight problem with the oven.  The last time I tried, the big oven worked just fine.  The temp on the little one is off by about 50 degrees.  After mixing up everything for the stuffing, I attacked the bird with relish!!  Oh darn ... someone got carried away when this one was dispatched and cut a big hole in the exact piece that holds the stuffing in.  I had to get creative with those little pins our mothers used to use to hold it all together.
I preheated the oven and everything seemed to be working fine.  In the turkey went, next to the thermometer I keep in there, you know, just to be sure.  I even set up my handy dandy thermometer IN the turkey.  This is the best thing I ever bought.  It has a steel cable on it with a probe that goes in the turkey.  No opening the door, except for this time.
There the turkey was ... basking in the oven light ... when I spotted the inside gauge reading 220.  WHAT?  That can't be right.  Indecision ..... before I finally opened the door.  Yup, that's what it says.  I stuck my hand inside to see if it felt hot.  I probably did that four more times before actually sticking my HEAD inside to see if it was getting any hotter.  MORE indecision.  Is it working?
I hit the ON button for the small oven, even though it takes an hour to heat up and I was sure the turkey would not fit.  Suddenly, the turkey probe went up one degree.  Okay then .... it must be working!!  Blink ... the temp went up another two degrees.  Oh well ... I've got all day I suppose.
I served my company some appetizers to keep them at bay.  Cheetos!!  No, there wasn't any company.  I ate the Cheetos!! 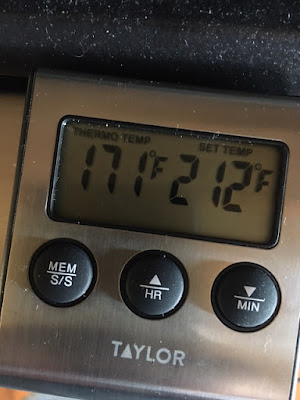 At long last ... almost five hours later ... the turkey hit the target temperature ... 171 degrees.  WOOHOO!! Isn't he beautiful???  Just like that picture!  Nancy was a happy camper, even if it did take 90 minutes longer.  I suppose I should have someone look at my ovens. 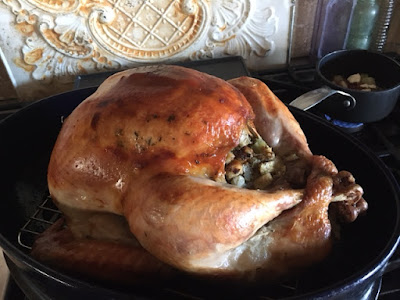 I had one other brilliant idea about that broccoli.  I took a handful of bacon crumbles and fried it with some onions, then dumped it over the green stuff.  It was pretty darn tasty ... I mean who doesn't like bacon?
AND in my book, there's not much better than turkey gravy smothering everything.  After I took this picture, everything got a brown bath!! 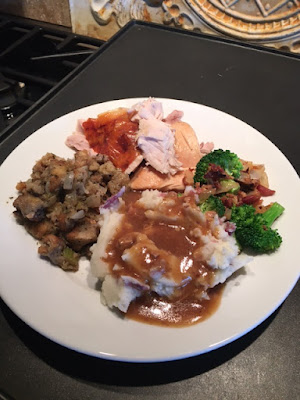 Even the homemade dressing came out pretty tasty, even if I was reminded two hours later that bread is a no-no.  I didn't even go back for seconds since I knew in a short amount of time I would be miserable.
Clean-up became a drudge with all those dirty dishes I was washing by hand until I remembered I had a dishwasher.  I never use it either since it washes for something like 90 minutes, and that's on the fastest setting.
SO Cooper and I watched football ... the LAS VEGAS Raiders (no longer a California team) beat the Cowboys in overtime.  It was a pretty good game, even if I am a baseball fan.  When the turkey and gravy began calling my name for dinner, I completely ignored it and instead made a 10-minute key lime pie.  THIS was dinner for me and it was SOOOOOOO good! 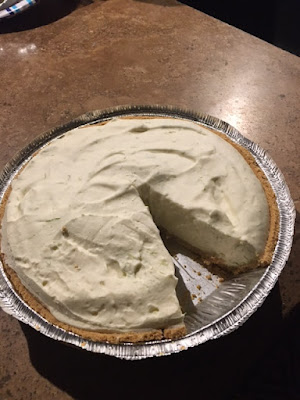 This morning the turkey is screaming again, so I suppose I'll have to have another turkey dinner for breakfast because that's how we roll here!!
I hope everyone had a wonderful turkey dinner with their family and enjoyed this day being thankful for everything we have.  Except those fuel prices ... I'll be thankful when (and if) they go back down.

Posted by Nancy Kissack at 5:36 AM