There are many roads to explore in the foothills of the Sierra Nevada mountains.  There's a short learning curve when it comes to driving cattle trucks loaded with critters you are hauling on those roads to fall pastures.  When my dad threw me the keys and said to drive the biggest of our two trucks, I was all over it.

Although there were some rather straight roads to get there, most of them were (and still are) wagon trails through the hills.  That means narrow and winding with lots of ups and downs through the gullies.  There was no direction, like slow down here ..... it was trial by fire.  I imagine he laughed at the look on my face with the right two wheels came off the ground around the first big corner as the cattle shifted to the left.  I guarantee you I never did THAT again!!  Slow was the name of the game when it came to hauling cattle.

On this morning, it was pretty foggy as I headed out, wondering how many of the roads were now paved. 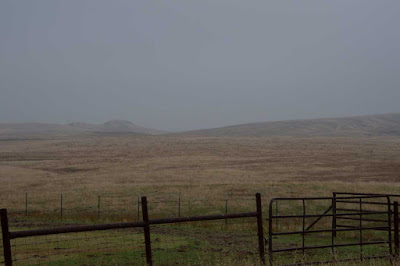 I was headed to Raymond California, but got side tracked along the way.  Back in the day, us high school teenagers used to hide out in Raymond at the bar.  I know, we were only 16-17 at the time, but the bartender didn't mind.  This is way back in the hills where no one cared.  I will say however, that the drinks we paid for were 100% coke. 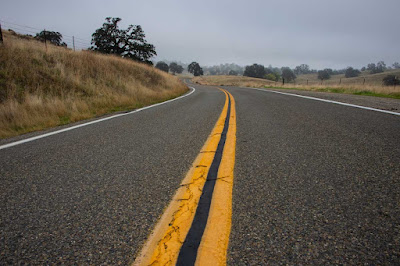 I was actually following the railroad from Madera.  Raymond was the terminus for the Southern Pacific Railroad from when it was built in 1886 until the 1940's when the tracks were pulled up. 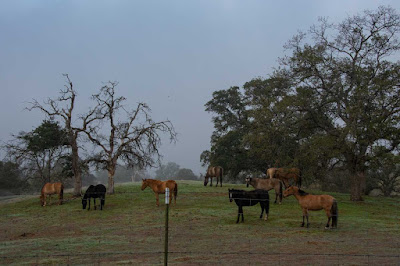 It was also the main freight and commerce center for the Central Valley and surrounding foothills.  Making it even MORE popular, this train hauled thousands of tourists to the end of the line, where they crawled up into a stagecoach for the ride to Yosemite.  Without it, Yosemite National Park might not have become a park ... but more on that later. 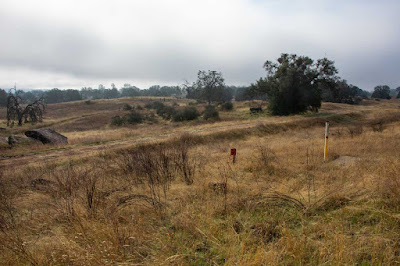 I got a little sidetracked when I saw a sign for Knowles.  Hmmmm I've never heard of Knowles before.  Then I heard it .... gobble gobble gobble!  Wasn't I surprised to see a dozen or more wild turkeys roaming the hill right beside the road.  In all my years, that's a sight I've never seen.  Deer - yes, but turkeys? 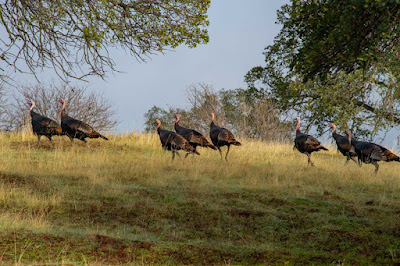 As I mentioned, this is a slow curvy road, maybe 25 mph at the most.  There would be more pictures, but there's not one single place to pull off.  This freshly painted barn was a surprise too!  Even the telephone poles are old.  I lost service on my phone about two miles back. 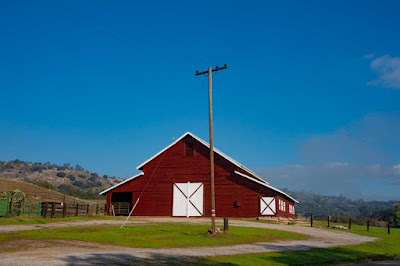 That's when I spotted this.  Raymond Granite ... it's a new one on me.  Never heard of it before. 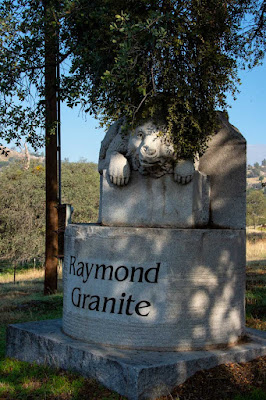 As you can see, it sits atop a big hill.  I definitely need to check into this!  This is the same building you will see below. 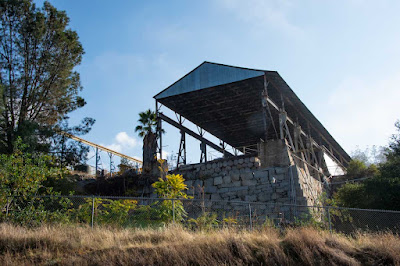 This is the little town of Knowles, although it appears this is the only building left standing.  I did notice several foundations, all made of granite.  Further investigation disclosed that this granite facility has been providing granite slabs since 1888 when it was opened by A. D. Knowles, on what was known as Dusy's Rock Pile.
Here's some background.  The earliest granite building in San Francisco was made from blocks cut and fitted in China, and shipped to the big city.  It survived the earthquake and the big fire.  Suddenly, granite was in high demand.  Raymond's white granite was used in the building of the Civic Center, City Hall and the Palace Hotel in San Francisco.  Even the Library, built in 1996, has a facade from the Raymond quarry.
Anyone remember Gary Cooper in the Fountainhead movie?  The quarry scene was filmed at Raymond Granite.
Marble headstones, easily carved, are made of limestone that melts in the elements.  Granite headstones do not, so the next time you are in a cemetery, check out whether they are readable or not.  This particular granite was cut in huge slabs and shipped by horse drawn wagon, then by train, to stone companies, mostly in the San Francisco area.  You had to have money to afford this rock. 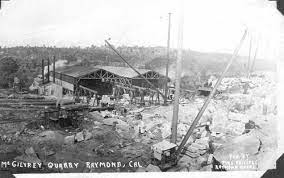 This is Sierra White granite ... primo stuff, cut into large slabs and stored in this shed where it is cut into smaller sections depending on what it will be used for.   Smaller pieces were gathered up, tumbled to make them look old and sold as cobblestones for use at Fisherman's Wharf in San Francisco.  Next time I go there, I'm going to look for them. 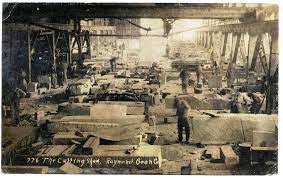 The granite company is still in business today, but only sells to monument dealers.  They still cut the slabs as they did back in the day, and in many cases use the same tools.  Fascinating little place.  Sadly, a new railroad was built in 1907 from Merced towards what was then Yosemite National Park (so designated in 1890) which bypassed Knowles and Raymond.  Although there are a few ranches left, the town has completely disappeared.
I finally made it to Raymond, but that's tomorrow's story.